I am thankful for running the Dana Point 10k Turkey Trot in the rain. No, not just rain... torrential downpours (at least in SoCal terms). But the enthusiasm of the racers and volunteers was amazing, and we all earned our Thanksgiving meals.............

It's been raining here lately, but I optimistically shunned off the idea that it would affect our race (subconsiously I chose not to bring an umbrella, pancho or any rain gear). Got to the race super early (typical me) and it started raining. No big deal. Rain got harder. Hm. So I just stood under a tent with my Catalina tri friend, Bill, who was also racing as part of his marathon training. There was no warm-up run like I'd planned; didn't want to get wet, stop and get cold.


By the time we lined up at the start line, the rain had subsided. Sweet, we were in the clear, I thought. However, I made a major mistake here: My mom (who also ran), Bill and I placed ourselves way too far back in the sea of 3,000+ runners. (My race results show I went off 5 minutes after the starting gun, shows how many people there were in front of me!) I would later realize that this would hold me back from running at MY pace because I spent too much time maneuvering around people and getting stuck behind runners who were slower than me. Not to mention, the course was also waaaayyy too narrow for the hords of people trekking though making passing that much harder.

But, back to the start. It was crazy: The race gun went off, and as if it were planned the skies let unleashed... It started raining hhhaaarrrddd. Then harder. I was sopping in less than 5 minutes. And despite my frustration of being stuck behind slower runners, I was stoked, soaked and loving the rain! At that point, I realized this race would not be about setting a PR or even getting sub-45 minute run like I wanted, too many factors would obviously prevent that. But I didn't care, running through the puddles and hearing everyone's laughter at our situation was so cool!

The rain worked to my advantage in one way: The sole of my left foot has been hurting ever since a did a 12-mile street run Nov. 14 (possibly plantar fasciitis; feels like I'm running on a giant bruise), so running in giants puddles and soaking wet shoes eased the pain... I had lots of extra cushioning!

After about 2 or so miles, the crowd thinned out a bit and I was able to get a good pace going; not enough to make up for the time I lost dodging crowds, but whatever. My pace got faster
with each mile, and all the while I was running though huge puddles, sometimes ankle deep. I felt pretty good the whole race and ended up finishing at 48 minutes. Not the greatest, but nevertheless an amazing experience! 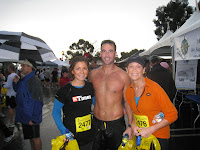 Check out me and the crew post-race (drowned rats), and see some race photos here to get an idea of the weather!

What a Week Leading Up to the Trot...

I haven't really posted much lately because my personal life has seen some major changes, and I've been quite busy as a result. I resigned from my job to go back to college and get a master's in kinesiology and become a personal trainer on the side. My last day was Nov. 13, and the very next day I went into a three-day personal trainer workshop through the American College of Sports Medicine, the organization I've chosen to get my certification (e-mail if you want to know why).

The class was refreshing and definitely verified to me that I'm making the right decision with a career/life change. Not only was the material so rad to learn, but I met some people who were like me -- one being a triathlete who did IMCA 70.3 and is doing it again on April 4; check out her blog here; she's an awesome chick. She was taking the PT class with her boyfriend and his brother, who are pro-mountain bikers. Now, these are the type of people I want to be around in my life!! We "whined" that our typical weekend workouts were being screwed by the all-day workshops. I swear, it's harder on me to be told to sit in a chair for hours than to make me go do a 50-mile bike ride. Sick, twisted... I know :) But I did fit in some workouts at odd hours and am now ready and looking forward to getting my ACSM certification!

After that workshop, I decided to leave the OC for a week. First, I packed my bags and headed to San Luis Obispo to visit my sister, who goes to Cal Poly, and to see a good friend of mine, who's also a triathlete. I used Cal Poly's pool and gym, ate college cafe food, did sushi (which included a crazy quail egg shot?!?!) and had a great time.

The highlight at SLO was my Wednesday-morning bike ride. I was alone and headed out with no plan... that initially led me around campus and onto Hwy 1 going north up to the prison. Sketchy. Turned around and eventually found heaven: a one-lane highway through SLO wine country. oh. my. god. b-e-a-u-t-i-f-u-l. I could have ridden that road (Orcutt Road for those interested) all day and have never gotten tired or bored. It was blissful and perfect weather. No one around; I just smiled and took in the beauty. Then, my sis took me to an awesome restaurant -- The Natural Cafe -- to grub. I Highly reccommend it; everything on the menu is healthy, fresh and delicious!

After SLO, I took off to Vegas. Very random, I know. But, I had the time and means to pull it off, so what the heck! And I went into it planning to workout. I did get in one 12-mile run on the strip that was really fun -- my idea of sightseeing -- and I used the spa/gym facilites at Planet Hollywood (where we stayed). That 12-mile run, however, has had lasting repercussions with the aching foot problem (uh-oh). And, being a Vegas virgin, I let the city get the best of me and had some late nights with lots of cocktails, but I recovered just fine -- got home Monday and did the fasted 50-mile bike ride I've done to date.

Life's too short just to stay in the status quo if your dreams are bigger. I'm in a place where I want to experience it all and build a life for myself that makes me happy and satisfied. Right now, that means hard work and self-discipline to achieve my triathlon and career dreams, but it also means taking off a day or two to let loose and relax... it's all about balance!!