I was hesitant to get into a SUP race at this point. So far I've viewed stand-up paddling as my little sacred activity in which I don't want to get wrapped up in data or feeling like I need to train for it and be on a schedule. It's not triathlon to me, it's not running. That said, I did buy a 12'6 race board so it's safe to say I wasn't totally just looking for a cruisey activity. Plus, when I go out I am, of course, trying to improve, get stronger and most the time, go fast.

In fact, one of the things I love about SUP is the way it challenges my mind and body in new ways. It's not like running where I can zone out. And not to diminish running -- it's complicated! -- but SUP is an activity that I think requires a special skill set and lots of cognitive training. It turns out I may be onto something here; take a look at the Sweat Science blog on brain plasticity in skill vs. endurance sport.

Anyway, so when my sister proposed that we do a local SUP race a few weeks ago I initially said, "No way... Uh-uh... no thanks." But then this little SUP race -- just the 4.5-mile short course -- started sounding more and more intriguing; it would just be a cool experience. So then I said, "Sure what the hell." No expectations... Just like my first-ever running race (Lake Hodges 10k in 2007) where I had no idea what I was doing but somehow landed on the podium in 2nd.

Spoiler alert but I didn't have any such dominance in my first SUP race, haha! However, I did have just as much fun. I am so freaking glad I ended up changing my mind and doing it!

The race was in Back Bay, Newport Beach, which in itself was intersting because just across the small bay from where our SUP race started is where the Newport Beach Sprint Triathlon takes place, a race I've done and podiumed at a lot. It was weird to see that triathlon course and cyclists riding along the bike path while I was getting ready for an entirely new adventure. In all honesty, I was totally content with SUP on the agenda ;)

Let me back up.

Another reason I was hesitant to do the SUP race is because of this marathon training stuff, and I didn't want to sacrifice my long run quality for the weekend. But then I realized this marathon isn't everything. I want to have fun, and I want to keep a good balance and healthy perspective on things. So, as any crazy endurance athlete would do...

I got up super early the day of the race (a Saturday), ran 8 miles @ MAF averaging 8:30 pace, ate the largest sweet potato I've ever had in one sitting (with eggs and avo), hit up the farmers market, then hit the road for the SUP race, which had a convenient 11am start time. Not to mention the SUP race was only $25 to sign up! Man, I am liking this sup stuff even more ;)

It was also another perfect SoCal winter day -- in the high 70s/low 80s and blue sky+sunny by the time the SUP race started. In addition to my sister racing, my parents did it as well! Mom and dad... ah, my family. Too much lol!

The race was incredible. It was mixed watercraft so participants on everything from SUPs to canoes to outriggers and prone paddleboards. There were about 150 people racing the short course (there was also a long course that was 9 miles; I was tempted but it started early and I did want to do that run). We paddled 1 mile to the start line and I used that as a warmup and to practice some "race pace" speed and form. I could spot the legit SUP'ers as we headed out... damn they looked good and definitely most of them were younger than me, maybe some late teens/early 20s. Plus some dudes that were just build like rock. 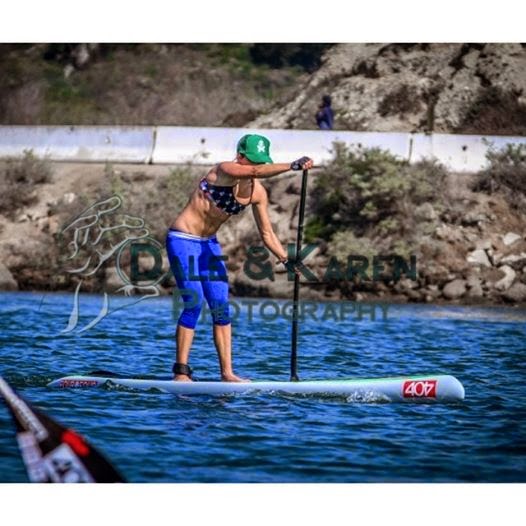 It actually went by relatively fast, but don't get me wrong -- it was a nonstop grind of power, strength and intense focus for a full hour -- and, man, that was a new experience unlike any triathlon, running or cycling race I've done. It was like doing pullups for an hour. Oh ya, and I didn't fall!

Here's the play by play:

When the gun went off I had a brief moment of "that" feeling... the butterflies in the tummy and the surge of adrenaline to goooooo! But it honestly was not as intense as when doing a triathlon. From there it was 57 minutes of HARD paddling, out and back. My sister opened a gap of about 20-25yds on me until the 1/2 way turn around, at which point I caught her (my turning skills were better) and she never got me back. She's a better swimmer and really strong so it's no surprise to see her so good on the the SUP. But I couldn't let anyone in my family beat me ;)

Meanwhile the other SUP people were kicking my ass, for real. It didn't bother me... what I wanna know is how they paddle so damn well though, even the girls who are much smaller than me. Technique, I know, but I want to learn that!!

There was one chick who was sooo buff in the upper body and incredibly fit, but not disgusting buff. More like the kind of strong I dream to be. If I am guessing correctly, she and I were in the same division -- SUP 12'6 Open 20-39 Women -- and she won. I looked her up (duh) and turns out she's an Olympic medalist in sprint canoeing. She went ~43 minutes.... I went 57 minutes. In fact, the top few girls in that division all went sub 50, and sure enough they're all sponsored "elite/pro" racers.... Then there was my sister and I bringing up the rear in 6th (me) and 7th (karlee), literally the last two in our division hahahaha.

To be honest, where I finished in the rankings didn't bother me one iota. Hell, I've only ridden this new SUP board like 5 times, and when I first got it (December) I was still wobbly, slow and just trying not to fall. So to already be racing? Pretty cool indeed.

And I bet none of them ran 8 miles prior to the race ;)

Anyway... I don't foresee SUP racing to evolve into the way I've been about triathlon/running/cycling... but I will definitely still do these things for a fun kick in the butt and as a quest to hone in on the skill. It's a blast! Why not?!

In the meantime, I'm off to bed... I am signed up for an all-day kettlebell training course tomorrow, one of Pavel Tsatsouline's SFG classes (formerly RKC) down here in La Jolla. I'm really into Pavel and his philosophy of training right now. Brilliant.