Best News Ever — For Two Of Us

I got the "best news ever" on Sunday morning from a client that I have to share. I had an initial consult with a lovely lady on Tuesday, and it was another case of female athlete hypothalamic amenorrhea. She'd been following me and the things I preach for a while but was still stuck. This gal has achieved a lot athletically -- the Ironman World Championships, Boston Marathon, and tons of other races in a relatively short time frame; you name it, she can do it. But her body suffered. Now here's the thing, ever since Kona last year she's been working on recovering and has done a lot of the right things, like adding much-needed body fat to her frame and beginning to relax on intense SBR training.

When I got her intake questionnaire, it seemed to me like THE MIND was still a big issue with her because physically her numbers looked generally good and BMI/body fat percentage excellent, but I still saw red flags with food issues, stress and exercise addiction (that her mind wouldn't let go of). So for an hour straight on our consult I laid out everything she needed to hear, and also gave her the confidence that she was on the right track already, just a few more tweaks needed. For example, she was eating vegetarian, and I strongly urged her to add back in animal protein, among many other ideas for her situation.

So on Sunday, I woke up to an email from her titled "Best News Ever" with a big thank you and that she got some strong takeaways from the call and started applying my recommendations right away (good on her for going outside her comfort zone to do this!). She's almost a day ahead of me (living in Europe) and at the end of the email she said, and I paraphrase:

"On Sunday I did a hike, strength trained (with lots of rest instead of crossfit), ate a turkey burger AND I GOT MY PERIOD!!!"

Ahhh! Now that's what I'm talking about! She was so close, I knew it, and she just needed that final push. Considering her body was ready, I didn't expect think it'd take long before her period came back if she followed my recommendations. I had something similar happen to me once -- I had a setback in 2015 with 3 months without a period mostly due to heavy run volume (ultra training) and stress. But then I got the flu, rested for a week, ate a ton of white rice, coconut water, and bananas, and got my period back right away. I learned my lesson and it never left after that, until I got pregnant of course.

I'm so proud for her and so excited, also because I know she and her husband want to start a family (soon) and this is the best step in the right direction to making that happen!

So speaking of starting families... a pregnancy/life update.

I also got some "best news ever" last week that confirmed what I thought to be true:

My subchorionic hemorrhage is GONE! Baby continues to look perfectly healthy and safe and everything's ok...

I hadn't had any bleeding for 4 weeks when I got an ultrasound this past Thursday, and I had a strong gut feeling that everything was ok and healed even before it was confirmed in the scan. I had recently been adding in a couple extra (short) walks to my daily routine, at most walking a mile at a time at a snail's pace, as well as taking on a few more physical tasks like holding Finley, aka Mr. Buff Guy, on walks again, as well as using a bit more strength in daily household chores, such as carrying stuff up and down the stairs, carrying heavier grocery bags, picking things up, and just moving around more at home. Still, my routine was as mellow and easy as it's ever had been in my life and I didn't mind it one bit.

So the u/s was the 20-week anatomy scan (I got it a bit early at 19 weeks) and all was great! Baby is looking good and they indeed confirmed the hemorrhage is gone.

I'm still waiting to get the green light from my midwife that I can exercise again, so it'll likely end up being 8 weeks of zero exercise and pelvic rest. Maybe TMI, but, I've honestly missed sex more than running during this time (if you've been pregnant you probably understand what I mean lol).

Meanwhile, I've felt great. Second trimester is dreamy. The only very noticeable pregnancy thing lately (besides the growing bump-boobs-body) is that I'm very emotional and cry A LOT. It doesn't matter if it's something funny, sad, happy, crappy, or emotionally neutral, I will burst into tears over anything and often it ends up in some laughing through the tears because of how silly it is. My appetite is also growing, even with low activity level, and I'm not holding back, but I'm eating well (with a few extra treats) and gaining weight at a very normal rate.

Oh yea, and I am feeling the baby kick! So dang cool.

Also last week, we moved! It all happened so fast, it's a long story, and I was very stressed for a few days there and didn't like that feeling one bit. The crying episodes certainly ramped up a bit too. I felt so bad that I wasn't able to help much physically and John did the bulk of the move in the biggest heat wave of the year. I contributed by doing massive organizing in the new place :) It's a rather big change for us -- we're no longer in Laguna -- and while it's a exciting and welcomed change, it's still change and it took some adjusting. My old friend insomnia even came back to visit, that's how stressed I was! I haven't missed that level of stress, but it happens, and already I'm back to my zen-mama self again.

We didn't buy the new house. We choose to still rent cuz we're just not ready to buy something and "settle down." We have other ideas and plans before we pull the trigger on a forever(ish) home. I also have no idea where I'd want to buy something, and John feels the same. Moving is a bitch, but mixing it up by living in new places over the years is fun.

Plus, overall we absolutely love love love the new place and we're so glad we were able to move well before baby arrives. It's been a ton of work to get settled, and most of all I'm already feeling my nesting instincts setting in BIG TIME. All I want to do is get this new house ready for baby's arrival haha. 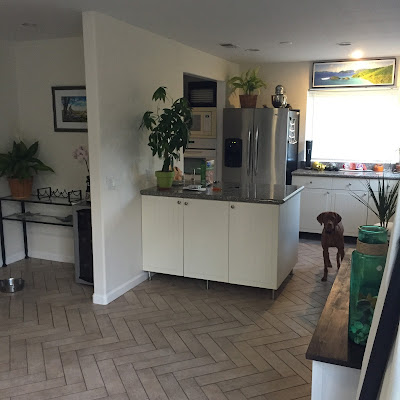 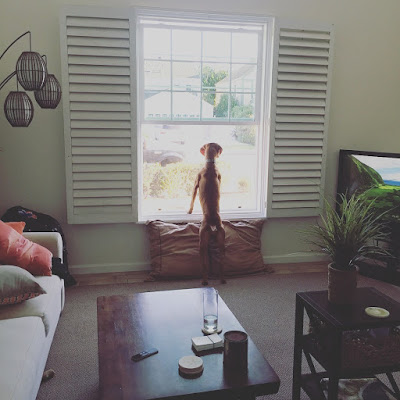 Ohhhh, and we also know the baby's sex, in fact I've known for over a month now, but I'll save that news for next time.

Finishing it off today by sharing a pregnancy craving I gave into. As I said, I'm eating very healthy, as usual, but I'm also being more flexible than ever and listening to my body. This morning it was something I haven't eaten in 15-20+ years, and I had two.... they were so enjoyable and no fretting about what this food usually symbolizes (not to mention they had delicious, fresh, gluten-free ingredients).

The older I get the more I realize that the key to life really is about finding the right balance, not extremes.