RR: Sprint Triathlon? Sure, Why Not...

As a coach, I'm normally not an advocate of last-minute races being added to the schedule. I like to have rhyme and reason to a race schedule, and time to work toward a race or at least prepare, whether it's an A or C race. Being random isn't a good plan. But, there are asterisks to that. I think there are cases where it's OK to be sporadic and do something last-minute for fun and within reason....

On Friday night I found out I'd be doing a local sprint triathlon Sunday morning. I haven't raced in about two months, nor have I really been doing what you'd call specific "triathlon training." But what the heck?! I'm still in shape and a sprint would just be a fun, hard workout in an environment that I love being in... And, yes, I've still been riding my bike (mostly slowly), running a decent amount and strength training a lot. But swimming, I have not been doing. Maybe three swims since Canada. (Giving the shoulder some time to rest and heal.) That all said, I would never jump into a big race like a half-Ironman or more given where I'm at, nor would I advise that for someone, but I knew a sprint was safe and OK in the condition I'm in.

I can't forget to mention the other two big attractions for doing this race:

One: It was going to be the first triathlon for an athlete I coach and I couldn't miss that. Heck, I had been planning to be at the race long before I knew I was participating! She and I practicing ocean swimming last week in Laguna.... 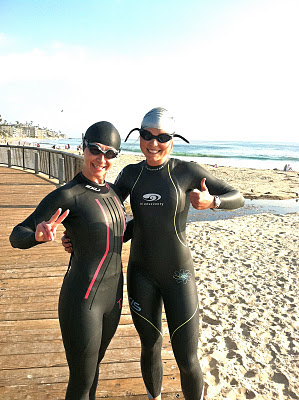 Two: My boyfriend was doing it too so we'd get to race each other--I mean "race together"--for the first time :)

~~~
Sunday morning the alarm went off at 5 a.m. At that moment racing didn't seem like such a good idea, staying in bed did, haha. But once we got going I was amped, and rightly so: The Kring and Chung Newport Beach Sprint Triathlon has been going on for 34 years and is a very well-run race on a fun little course. The race organizers and volunteers are amazing, lots of goodies pre/during/post race, and of course some fabulous prizes! I did it back in 2009 and got 1st AG, I think (I just remember the gift certificate I got for El Ranchito Mexican Restaurant - score!).

As we drove to the race site, I chowed down some oats and thought up my oh-so intricate race plan: GO hard and make it hurt. Don't let up until the finish line.

Swim
After spending the better part of the morning with my athlete getting her all squared away, my wave went off in the foggy, chilly weather at just after 7 a.m. The water was warm but tasted like ass. It was nasty, not as nasty as Mission Bay, but still gag-worthy. I felt pretty decent on the swim but had no clue what pace I was potentially holding, swimming itself felt foreign and like I had lots of kinks to work out. All I knew was my HR was high--due to inefficiency and lack of training on top of still trying to "go fast." It was a 1/2 mile and I got out at 15:xx and change, at which point I tripped when standing up--smooth! Not all that concerned with the swim because what can you expect when you don't do a sport for two months and then try to race? It's just too bad they had to add the run back to transition to our swim time, making us all look even slower ;) On a positive note, the shoulder felt fine, yippee!

T1
Nothing special except I messed up my watch. Funny that I can get the Garmin to run smoothly for a whole Ironman, but I mess it up in a sprint.

Bike
In addition too fog, it was misting out so I remained soaked the entire race; the drowned rat look was a very good look for me, let me tell ya! ;) The roads were kind of slippery, but thankfully the course wasn't too technical or sketchy so you could still hammer. It was mostly all flat along Newport Back Bay with one steep hill that you have to do twice (two-loop course).
I saw the BF and my athlete, and the both looked smokin' fast so that made me happy.

I was having derailleur/chain issues and decided to stay in the big ring up the steep hill out of fear of something messing up from switching between small and big ring. Yup, that pretty much fried my legs, but I went without any mechanicals so I was content (like I said, offseason, so not doing much bike maintenance thus derailleur/chain issues that weren't fully fixed pre race lol).

Other than that, I spent most the ride passing people, especially on the second loop, and reminiscing on the olden days.... Flashback: I first started riding Back Bay when I was 3 or 4 and on the back of my dad's bike, we'd ride that trail weekend mornings to go pick up donuts. Great memory but WOW, times have changed. I don't think my dad or I have had a donut in years, and now I was racing on that road like a madwoman haha.

Finished the bike in 43 something, about a 21 mph average. I know me, and I should have been faster, but whatever.

T2
All I gotta say is I need to work on bike dismounts for racing from here on out. At least my hideous dismount is accompanied by a smile :) 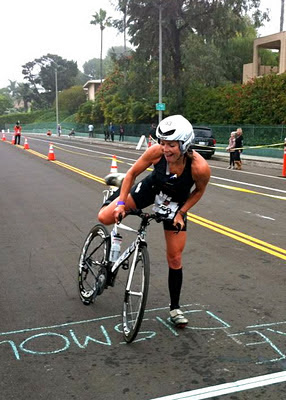 Run
I've been doing some run intervals with my strength workouts at the gym and I'm training for that Xterra trail race, and based off that I knew I could pull off a sub-7 pace for 3 miles. believe!

When I started the run I noticed I was surrounded by only men. Hm, doing alright I guess. A couple spectators then gave my splits on how far back I was from the lead women, and how many were in front--to my surprise, only three were in front at the beginning. At one point I ran my way to second, but then got passed by the eventual winner and sat in third.

I felt really good on the run. By that, I mean it hurt, but 6:40-7:00 pace was doable. I had a couple people yell to me that my form looked good, which must have been in stark contrast with the drowned rat look I still had going on in the wet weather. Then this older guy said the funniest thing as I passed him: "Ya know, in my day, it'd be inappropriate for a young girl like you to pass an elder like me...." or something like that. I said "you're funny" and kept running.

Those 3 miles went by fast... I ended with a little sprint down the finishline, and my run time was just over 20 minutes, a 6:45 average pace. Nice. 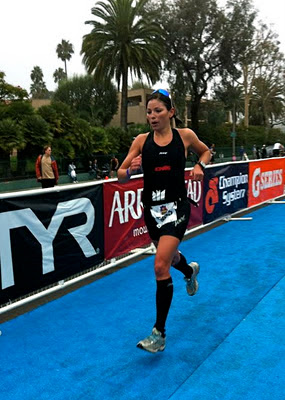 Finish
I never caught my BF, which I had contemplated trying to do being that he started two waves before me, but I was close! I still beat him overall though hehe... granted he did swim and bike slightly faster than me. Even though my overall time was faster, I have to say this guy is a total stud: It was only his third triathlon ever (first was in July this year), and he finished top-10 AG for the first time! He'll be an animal in no time!

Annnnd: My athlete who was doing her first tri also finished in style, going faster than the predicted goal time and earning 7th in 35-39 AG! Can't beat top 10 for a triathlon debut! Best part, she can't wait to do another one!!! Happy coach :)

I managed to pull off 1st AG, which was a pleasant surprise. I thought I had secured 3rd overall female, but turns out there were a couple older women in the wave after me who beat me by about a minute when all was said and done. Oops! Never forget about the waves behind you, not to mention the superb ability of the veteran women of the sport! Yowza! That said, it was still fun during my run when I thought I was "racing" for the overall podium :)

Podium.... who's the bum in the beanie?! I mentioned this race has good prizes... this year another gift certificate for mexican, TYR gear and a flat of bottles of a new, healthy drink! 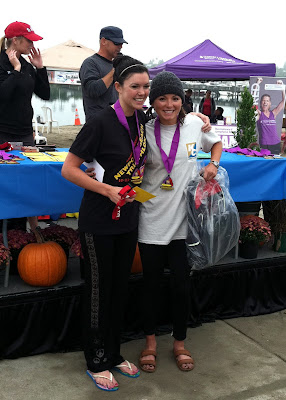 Oh, and I got another gift certificate to the same Mexican restaurant for earning 1st AG. Guess what I did last night.... Margs and Mexi! 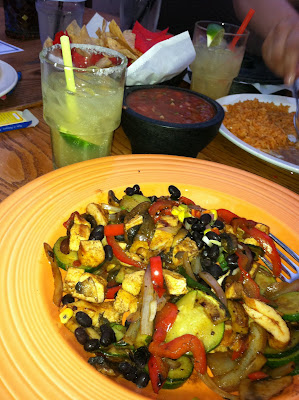 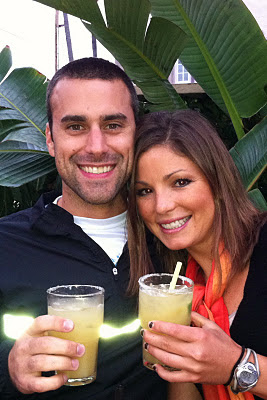 We might be headed to Catalina in a couple weeks for another round of hurt! ;)

PS - BIG thanks to John's sisters for coming out to the race and taking pics!