First, health & training update: Things are finally going well, besides lots of rain and crappy weather. But I feel excellent - fought off that cold damn quick; and besides a little lingering foot pain - still doing some PT - I'm able to train at full speed. I'm actually kind of trippin out on how much energy I have these days. I think it's due to several factors: healthy eating with a few new spins to my diet, a big dose of daily supplements, zero alcohol since New Year's (besides a friend's wedding, but I don't want to go there), no coffee just tea (this is a big deal for me), a full schedule (having lots on my plate always motivates me; I make a lot of to-do lists)....
But back to eating. I decided to make banana-pumpkin bread, but not just any kind, gluten-free style. I don't have celiac disease, but I've been on the GF bandwagon for a while now. Why?
Well, first, gluten is a complex protein found in wheat, rye and barley, so it's in most breads, pastas, grains, etc. Without going into the whole science and history of it, it's said that gluten can cause fatigue, digestive problems, malabsorption of nutrients, GI issues (no fun), joint pain, among other things, and some claim it's in an endurance athlete's best interest to limit or cut out gluten. Check this out. Read that even pro triathlete Desiree Ficker is gluten-free. A Google search can bring up tons of resources.
GFism is pretty abundant these days - there's a link bewtween a GF diet and "curing" autism, Jenny McCarthy stands by this one - and everywhere from Trader Joe's to Whole Foods to regular grocery stores have GF products. In no way is this a low-carb diet. Pastas, cereals, breads, crackers, flour, baked goods, cookies, snacks, etc... you name it, there's a GF version. I'm all over brown rice pasta, breakfast tacos with corn tortillas, rice crackers, GF oatmeal, etc., but I hadn't baked anything GF. Until now. Something about wintery weather (SoCal has gotten a lot of rain/cold lately) inspires me to bake. Having four browning bananas chillin in our kitchen also sparked the idea. Not to mention, I have a fetish with anything that is or tastes like pumpkin pie, so adding pumpkin was a must! 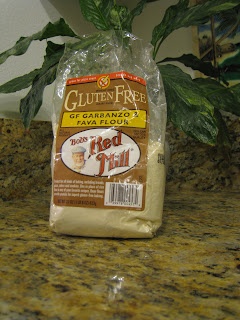 As you can see, I used Bob's Red Mill GF Garbanzo & Fava Flour. A good source of protein unlike regular flour, not to mention a good amount of carbs/fiber: For a 1/4 cup it's 110 calories, 1.5g fat, 18g carbs, 6g fiber and 6g protein. There are other GF flours, too: brown rice flour, millet flour, buckwheat starch, potato flour, you get the idea; many GF bread/baked goods recipes call for a combo of flours. 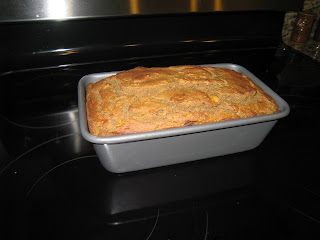 The bread turned out extremely tasty, though a little dense and still kind of doughy in the middle. It was even better the second day, though, once things "settled in." However, I'll most likely do some recipe-tweaking and also bake for 10-15 min. longer next time.
Here's the recipe:
2 cups GF Flour
2 eggs
3/4 c brown sugar
1/4 c butter, soft (used light butter from Trader Joe's)
1/4 c sour cream (used fat-free from TJ's)
1 1/4 c mashed banana
1 1/4 c canned pumpkin
1 tsp salt
1 tsp baking soda
1 1/2 tsp vanilla
1 tsp pumpkin pie spice
1/2 tsp cinnamon
1/2 tsp nutmeg
Preheat oven to 350
Spray 9x5 loaf pan
Bowl 1: Combine flour, salt and baking soda
Bowl 2: Blend sugar, butter and sour cream, then add mashed bananas, pumpkin, vanilla and spices and stir together until well mixed.
Combine flour mix with banana mix and fold together.
Put in loaf pan, let it set for about 20 minutes then bake for 65 minutes. (That's what the recipe says, but you'll likely need to bake for at least 75 minutes.)
I got the majority of this recipe off Recipezaar.com, but I tweaked some things. Also, next time I'm going to add flaxseed meal for Omegas.
Posted by Tawnee Prazak, M.S., CSCS at 9:34 PM