This One's For Grandma

I haven't had much time to blog, but I want to share a bit of what's going on as I get closer to Ironman Canada.

Last week, my grandma passed away peacefully in her bed. She was 87, and one of the most amazing women I've had the pleasure to know in my life. Although her health hasn't been ideal in the last year or so, her death was still very unexpected and has shocked my family, especially my dad, who's now lost both parents. Her death came just after the first anniversary of my grandpa's death, her husband (he died July 31, 2010). To me, it just goes to show how powerful the bond can be between two people after decades of a loving marriage and close companionship. In my opinion, after he passed, I don't think she was ever the same without him around and, thus, a "broken heart" played into her passing. I think this is the case with a lot of couples who've lived long, happy lives together.

As you can imagine, it's not been easy to mourn the death of a loved one with so much going on. The thought of Ironman seemed frivolous at first, let alone having my family trek up to Canada to watch me race when we're all still in a state of grieving. It sounded even selfish to some extent. But after some long talks with my parents and loved ones, we've all agreed that my grandma would want nothing more than for me to head to Canada and race my best... with my family by my side. So that's just what we're doing. And you better believe I'll be racing in the name of my Grandma Frances. She was such as strong-willed and driven woman, yet was still so warm and loving with a heart of gold. I want to carry on that spirit in the things I do.

Thankfully, we're having services for my grandma before we leave, so we'll all get a little closure before race week. Still, it kills me to know that I won't be able to call her after the race to tell her about it.

Btw, as you can imagine, this article by Charisa was beautiful, but it made me cry, pretty hard.


In the journey that lays ahead, I'll be thinking about these two each and every mile (picture with my grandparents from Mother's Day 2009).... 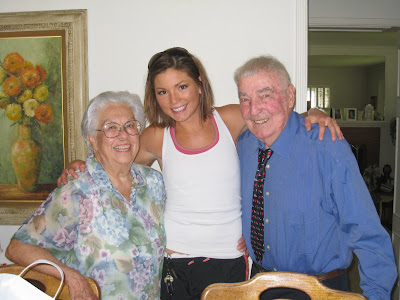