As offseason goes, we normally tend to indulge in all those things that, for the most part, we stayed away from during intense training. I know I've loosened up with my diet, sleep habits, social calendar... and the list goes on. It's healthy to let loose a little and enjoy new things. Heck, I've even replaced most my swimming with surfing!

Anyways, while it's good to indulge, it's still important to keep up with healthy, wholesome eating. So today I wanted to share a yummy dinner recipe that won't leave you feeling weighed down after you eat it, and is a healthy balance of protein, fat and carbs. The recipe is based off a pasta dish I found on Eating Well. I made it into a gluten-free, grain-free dish that is boyfriend approved (and he's a tough critic, being that he isn't gluten free and eats everything under the sun lol. He really seems to like my healthy cooking though, yay). 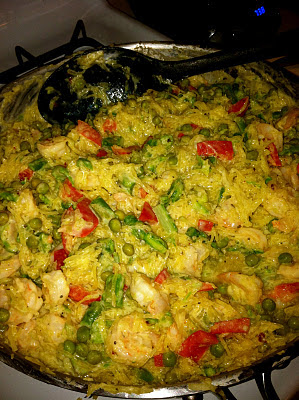 Preheat over to 350. Cut spaghetti squash in half and spoon out the seeds. Place each half, flesh down, on a baking sheet and fill with a layer of water. Put in oven for about 60 minutes or until you can easily stick a fork through it (will depend on size of squash, oven, etc).

In a large skillet, saute shrimp, bell pepper and peas with EVOO and 1/2 the little lemon juice. For asparagus, I quickly steamed mine before adding it to the skillet with the other stuff, but you can add it in with the veggies if you want it more crispy.

In a separate bowl, mix yogurt, mushroom soup, rest of the lemon juice, salt, pepper, garlic, parsley and any other seasonings you'd like. Add the yogurt mix to the shrimp/veggie mix, and mix well. ***Note on greek yogurt: the amount you use will vary depending on how much spaghetti squash you have and on how thick you want your cream sauce.

Last but not least, when spaghetti squash is ready, remove flesh with a fork and add most the squash to the skillet with all the shrimp, veggies, etc. You might have extra spaghetti squash, again, it just depends how you want to ratio your ingredients.

Let everything simmer together for another 5-10 minutes before serving.

Sorry I didn't get more pics of the cooking process! Plus, I think the flash on my camera made it look less creamy than it really was. Weird.
Posted by Tawnee Prazak, M.S., CSCS at 12:20 PM