I was craving enchiladas, which is funny because it's normally not something I eat. Specifically, I wanted shrimp enchiladas with verde sauce instead of red sauce, and surprisingly when I did a google search (including the word "healthy" of course) no recipes with those specifications came up. But enchiladas are relatively easy to make, so I gathered up info from various recipes (one in particular, but now I can't find it haha), and created my own healthy version: 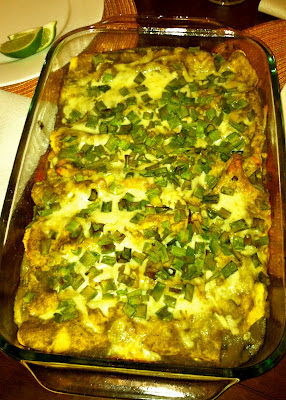 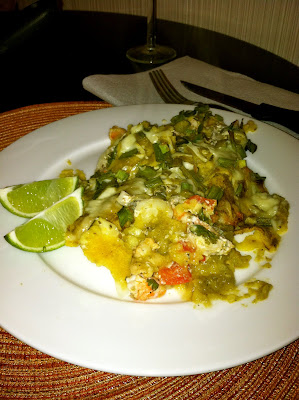 Healthy Shrimp Enchiladas Verde
*Note: I used all organic ingredients (except sauce I think), which I highly recommend!
1 lb raw medium shrimp, peeled/deveined
1 large red bell pepper
1 large zucchini
4 large green onions (the ones with big bulbs)
1/2 cup greek yogurt
1 lime
~1 1/2 cups shredded Monterey Jack cheese
~1/2 bunch fresh cilantro
1/4 tsp cumin
1/2 tsp oregano
salt & pepper (eyeballed)
10 corn tortillas -- splurge on quality/non-GMO/organic for best results
16 oz. green enchilada sauce, here's what I used: Frontera's
olive oil
optional: roasted pasilla chiles, avocado
Directions:
*Scroll down for pic-by-pic process
Preheat oven to 350 degrees and prep a 11 x 7 Pyrex/baking dish with a light amount of olive oil.
Chop all your veggies and shrimp (each shrimp = 3 pieces). Heat pan with olive oil and saute red bell pepper and all the white parts of the onions and only ~1/2 of the green stems. After a minute, add the chopped zucchini. Saute for 4-5 minutes total then add shrimp and juice of 1 lime and saute for another minute only. Remove from heat and add Greek yogurt, seasonings and most of the cilantro (make sure it's coarsely chopped). Let all that sit for ~5 minutes.
Meanwhile, heat another pan with or without a bit of olive oil and heat your tortillas. Pre-heating tortillas prevents them from breaking apart, but if you have quality corn tortillas (i.e. organic, non-GMO which should be a given) then they probably won't break apart anyways.
The next part works best if you have two people: spoon some of the shrimp/veggie mix onto each tortilla, wrap each tortilla and place them seam down on the baking dish. You should be able to fit ~10 tortillas total, and you might have leftover shrimp mix which I saved for another day :)
Once tortillas are all stuffed and in the baking dish then pour on the green enchilada sauce, spread the cheese on (use as little or as much as you want here), and top with the remainder of the chopped greens of the green onions.
Bake in oven for 25 minutes at 350.
Serve with extra fresh cilantro, avocado/guacamole and even a roasted pasilla chile for a little more spice!
Some notes:
*I was going to make homemade corn tortillas but ran out of time so I bought some from Whole Foods. I am not a fan of corn or corn products, but occasionally I like corn tortillas or tortilla chips and I will always look for an organic/non-GMO brand because anything else quite frankly scares me. I also read that the crappier the tortilla is in terms of the corn used, the more likely it is to break apart, which makes sense why so many corn tortillas always break because they're probably from cheap GMO corn. Yuck.
*Be careful with the enchilada sauce you choose. For one, try to avoid canned kinds. There are health risks associated with tomatoes sitting in cans, not to mention you're more likely to have crap ingredients in canned products (i.e. high fructose corn syrup, corn starch, gluten, preservatives). I would have like to have made my own, but no time. Frontera's was delicious and a very decent ingredient list! Only 10 calories for 2 Tbsp too!
*I bought some pasilla chiles at the farmer's market and wanted to put them in the mix, but I had never had them plain and wanted to get a taste for them on their own, so I served them on the side. Next time I'll definitely put them IN the enchiladas because they have a great, no too intense spice that was delicious. I covered mine in olive oil and roasted them in the oven for ~20 on low heat. 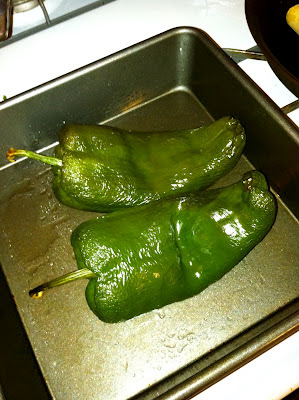 *These make excellent leftovers!
Pictures of the enchiladas in the making: 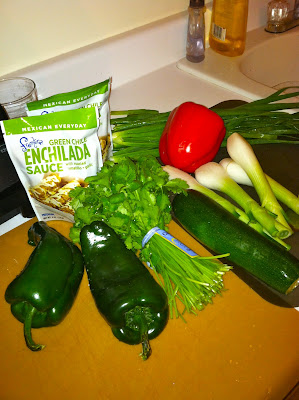 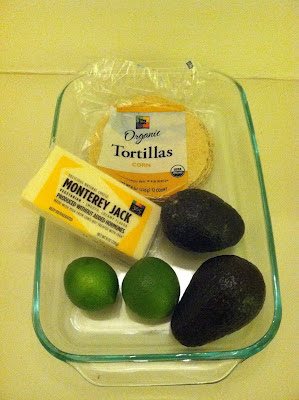 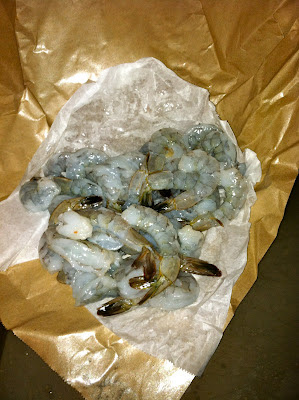 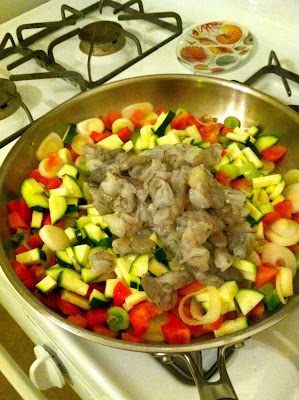 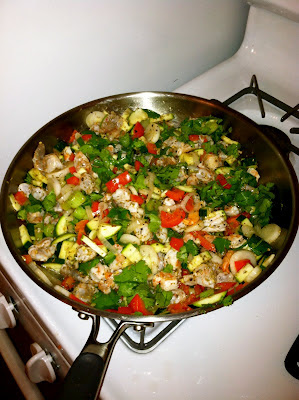 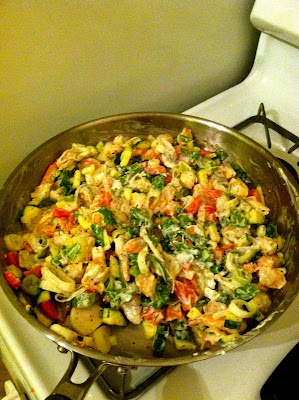 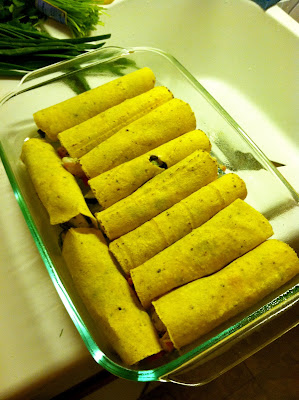 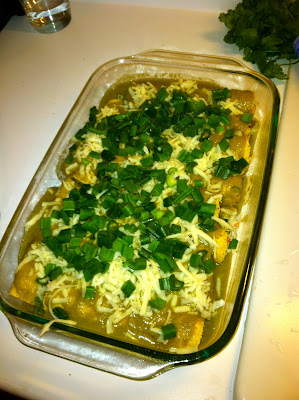