I had a nice blog drafted on my recent half-marathon up in Portland, but I wrote it on the iPad and apparently I didn't save it correctly so it disappeared into cyber space. Bummer. So this time I'll keep it relatively short and concise. Stay tuned for part 2: the Portland food and drink blog with mini reviews and pics of the amazing places we hit up while in town.

*I PR'd by 2+ minutes with this broken wrist (1:34 and change, but that time was for more than 13.2 miles of running, so I actually ran a 7:09 average on my Garmin, faster than official results). Yay! PS- I don't think the course was long, there were just a lot of turns and I probably didn't run them as "tight" as possible.

*The wrist situation was the big question mark, as I did not know how it was going to feel in those latter miles at a rather intense effort. But it held up beautifully. Arm swing was normal. Grateful.

*I think I ran too easy. No, I know I did. HR confirms this. Subconsciously I think the wrist had me a little worried and I held back-ish, especially in the beginning. During the run I did not pay attention to any data whatsoever except for glancing at mile splits as they popped up. The first few miles were ok (7:15-7:30ish pace), but my breathing was really mellow so I picked it up a bit finally. Near the end (when I knew the wrist was gonna be fine) I was going sub-7:00 and realized I could have started that earlier on.

*I now feel confident that I can work my way to going sub-1:30. New goal.
*Nutrition and hydration were pretty much non-existent during. A few "drops" of water at aid stations, and  an attempt at trying a new gel made with chia seeds (tasty, but I dropped it so only got a few slurps). I'll revisit that gel talk later... Also, note breakfast to the right:

*Rock N Roll races are very well-run events and I would definitely do another one! Oh wait, I am. Looks like I will be doing the SD half next weekend! With all the training I have on tap ahead, though, I'm not sure I can expect yet another PR.

*The Portland course was awesome and weather was ideal. Do a race in Portland if you ever get the chance. It's a great area that offers a lot of cool things to do, great food, urban yet outdoorsy, and lots of great breweries to explore! And that, my friends, will be the topic of the next blog, which I'm writing now! 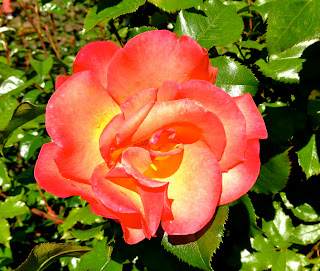 *Last but not least, John PR'd big time to shaving something like 5-6 minutes off his PR from last year around this same time on a similar course elevation-wise. I guess that's what happens when you live with a coach!

*Monday the "run bug" was still in us and we drove out to Hood River stumbling upon a breathtaking trail secluded in nature and just gorgeous. We ran more than 10 miles and it was, to me, the perfect run -- exploring a new place, enjoying it with my man, ignoring the data, and feeling good knowing I could still run decently after nearly 20 miles the previous 2 days.