This weekend did the trick. No Monday blues for me! I woke up at 6 AM on the dot this morning (monday), no alarm, feeling SO excited to work. I never ever dislike or dread my job(s), but like any normal human being I do get a case of the Mondays when I know I'll be at my desk from sunrise till after dark. Not to mention, I do enjoy that feeling when I can shut things down once business is handled, step away from the computer and not check my phone/email every 5 minutes.

That said, this weekend I basically shut it down at a new level for two full days (minus Sunday evening training plan updates for my athletes), and I mean really shut it down to the point where I wasn't even thinking about triathlon outside of a few minutes tracking IMAZ. Normally I will still work on the weekends (although less), and I still have a standard routine of playing around on the computer/internet, researching/reading stuff relevant to my work, oh yea, and following social media. Sometimes, I'll admit, it's just unproductive crap going on, but that's usually that's when I'm exhausted from a workout and have no brain cells left to spare. Not always a bad thing because that usually means the training went well ;)

However, this past Sat/Sun was very different. I switched it up like I haven't done in ages, if not ever. I engulfed myself in other projects, tasks and fun therapeutic things that were totally outside my norm. If you read my last post, it's all related here folks. Two days of stepping outside the box was truly enlightening and a really positive experience.

In fact, I am considering taking a full week off before this year is over and doing a staycation; I don't need to go anywhere fancy to achieve the results I want; I have enough to do right here (as you'll see below). A former client of mine (I lost her cuz she moved, grr) said she did this annually and it led to her nearly doubling her income! (She is also a self-employed coach/entrepreneur in a non-fitness business.)

So what did I actually do this weekend? Among the highlights of my weekend: Baking; I made up a recipe for a GF/vegan banana-date-chocolate-chip bread, which got the boyfriend seal of approval. (*Recipe to come tomorrow*). A little shopping at the nursery and planting some veggies on our patio. Saturday evening bikram yoga (the regular routine this past month), which put me at 4.5 hours of bikram this past week (3 classes @ 90'). Oh yea, I did do a 90' trainer session, but it was insanely fun, for real, and, heck, it was my only bike ride of the week. It had good vibes and I created the workout as I went including spur-of-the-moment intervals: 5 X 6' @ 4' tempo + 2' ME efforts out of the saddle. No power, no HR, no data at all. Just went my feel and rocked out to Girl Talk.

But by far the highlight of my weekend and the thing that took up the most time, effort and thought was painting. Holy crap! No wonder I put away the pain brushes years back. I am obsessed with painting and find it hard to do or think about anything else when I have a project going. I set up my easel Friday night, and started playing around with some colors and just getting the feel for the brush on canvas again. Then Saturday I started something official. I got so wrapped up in it that I literally FORGOT that the Ironman World Champs were airing on NBC. Seriously, wtf?! That never happens to this triathlon/Kona-obsessed chica!!! Saturday I probably spent 5+ hours painting -- mid-morning, then all Saturday night. I even went to bed after John, which never happens. Sunday I was planning to do a short run before having to go to a baby shower, but what did I do instead? Painted. For like 3 hours. Oops.

This is what I've created so far (bottom), based on the photo (top). Far from done, but I'm thoroughly enjoying it so far. 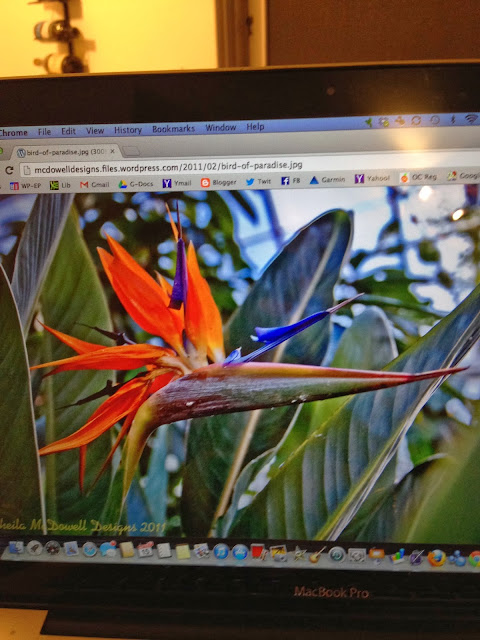 As much as I was dying to continue it today, I had to let go of it and work. But like I said at the beginning, this Monday has not sucked. And I'm super pumped for the whole week.