Man! Eagleman on, eagleman off, eagleman on, eagleman off.... sadly it ends there. Race off. It's all good, surprisingly this hasn't been stressing me out, just taking it one day at a time. When I first broke it (3 weeks ago as of tuesday) I was nearly convinced I wouldn't be able to race just 3.5 weeks later. But then last week I got a glimmer of hope when I was able to do a couple successful ocean swims. I thought the swim would was going to be the biggest issue in whether I could race, so once that worked out well, I had made a 180 and was now nearly 100% convinced I could race -- and I got excited to toe the line! I wasn't worried that my training had suffered... I was still totally motivated to get out on the Eagleman course and see what I could pull off.

There was just one little thing, though. I still hadn't ridden by bike outside on the real road since the break. All rides had been on the trainer. I am still required to wear the wrist brace at this stage in the healing phase especially when working out, and with the aero bars that are on the Felt IA, it was impossible to pronate my wrist to grab the bar. But on the trainer that was no biggie; I could just rest my arm on the pad without gripping and it was fine.

Once I could swim I hustled to figure out the bike situation and how I could ride. The solution was getting ski-bend aero bars, and that way I didn't have to bend my wrist to be in aero - perfect! Monday I borrowed the bars I needed and (totally last minute) got in touch with Felt to see if they could help out. I am so lucky to have a great relationship with the guys there. Once I told them I still wanted to try and race, and the aero bar situation, they were able to work on the bike and get it set up all in one afternoon (oh, and they finally internally routed my SRM wire -- goodbye ugly tape haha). I was feeling so stoked and optimistic! 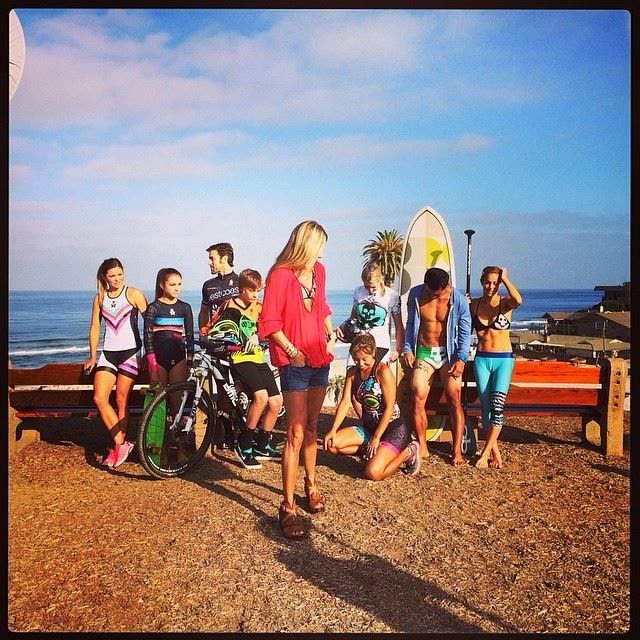 Tuesday we planned to test the setup riding outside. John and I did a little easy ride outside; standard race week taper ride. But first, we had a quick trip to SD for a fast and fun morning photo shoot with Kristin Mayer and Co., displaying her latest Betty Designs collection; see photo. She's a design genius if you ask me.

Soooo... the  bike ride. Oh man. It was a disaster (ok, maybe that's a bit dramatic but it wasn't good). What's that saying about getting back on a bike? I don't remember, but dude I felt like a total rookie and unable to handle a bike, let alone race a bike. Simply mounting the bike was sketchy (which I had been warned about by a couple doc's -- they were right), then it was super sketchy riding whether in aero or sitting up. When sitting up I had to be very "light" on my wrist as to not apply too much pressure, and in that same position is how I brake, which was nearly impossible to execute with the L side. Meanwhile, the wrist brace was digging into my palm as I tried to grip anything, and that was painful as heck after a few minutes (can't imagine 3hr of that). It's been about 24 hours since the ride and my palm still hurts from that ride, as if I have a gnarly bruise.

So, it's one thing to be tough... it's another to be dumb. And after that ride yesterday I felt like it would be unsafe to race especially among thousands of other triathletes -- unsafe for them and me! The bike at Eagleman is flat, which is definitely a plus for my situation (hilly course = no way), but it's also somewhat of a technical one-loop course with lots of turns where solid bike handling skills are a must. I saw the writing on the wall. At one point in my stubborn state I had to say to myself, "Stop, Tawnee, it's just a 70.3. There are a million more. Don't F this up more." And before you ask: I can't ride without the brace, I can't use a softer/more functional brace or ace bandage -- both options totally unsafe at this point.

Bottom line: The risk is not worth it, and this is where I draw the line.

The good news is... and there's plenty of good news when you focus on the bright side...I still have a super fun trip to the East Coast planned (we'll be gone for a whole week. I can geek out on triathlon as sherpa/spectator and give you guys inside photos + results of pro race on my Instagram and Twitter @tawneeprazak. Then once tri stuff is done, John and I are doing some touristy stuff in DC.

AND the second part of good news: I was lucky enough to score a spot into Vineman 70.3 for this year! Yup, going back to Sonoma for Vineman #4. This year it's July 13, exactly two months post-fracture; last year I was able to execute the race after breaking my wrist, and I know I can this year. I'm taking a completely different approach to my training as well, and will be documenting it regularly on the blog. Consider it another n=1 experiment. I'll fill you guys in soon.

To wrap up: It's not Thursday, but how about a little throwback to my first Vineman in 2009....


So, life goes on! Glad that decision is made.