Being 'Flexible' Two Weeks Out From a Race

This is the part where listening to the body becomes the No.1 priority. No screwing around when you're two weeks out from a race no matter what kind of training you're doing -- there's really not anything you can "gain" fitness-wise when you're that close, but there's plenty of damage that still can be done if you go too hard or do too much without letting the body rest and recover. In that final stretch, if you're questioning whether you're body is up to such tasks due to fatigue or lack of motivation or whatever, then (as long is you're not just pulling the "lazy card") be willing to be flexible -- shorten the workout, change it or sometimes just bag it all together. You are better off resting rather than fighting through a workout this close to the big day. You also want to rule out any "fear-based" or "panic" training, aka those last-minute crazy workouts done thinking you'll magically gain some fitness; this is something I talked about on a recent post at coachtawnee.com. If you have a coach, perfect. Work with him/her to develop your ideal rest/taper plan even if that means changing something the coach originally laid out. If you're self-coached, then err on the side of caution. Here's how it went for me last week:

While I didn't feel terrible (overall energy was still good), I could just feel a little bit more of that stinging burn in the legs and signs of fatigue that kept me from having the same snap in workouts as I've seen in the previous ~6 weeks. For the record, I also had a shit-ton of blood taken on Tuesday for my routine bloodwork, and, well, ~10 vials later... I really think that had an lingering negative effect on my workouts until Friday quite honestly. So I just rolled with the vibe... training volume actually looks the same as it's been (or even a bit higher) but more than an hour of that total is from yoga (aka me being flexible, like post title implies, see what I did there?! lol). The remaining ~6.5 hours of training was just going by feel not forcing anything; a little bit of intensity just to stimulate but not fatigue, and some all-easy sessions too. Looking at the big picture, the timing for a nice rest break came at the perfect moment before this Sunday's race.

It wasn't 100 percent R&R this past week though, and I made even more progress with wrist rehab and getting closer to being fully functional again. Among the highlights:

1) Bikram Yoga. Oh how it missed it. Did a class Tuesday for the first time post-fracture, and while that's not really standard triathlon taper stuff especially after being "off" yoga for so long, it's what I wanted to do, so I did it. Loved it. I was able to do all poses (and surprisingly well for my standards) except for locust where you're lying prone with hands also prone on the ground and you use a lot of strength in wrists/arms to help lift lower body/legs. Oh and except toe stand, but I've never been able to that (yet) lol.

2) Ocean swim love. I had three days in a row of super quality ocean swims of about a mile each day give or take, two of those without wetsuits (one with just for practice if race is wetsuit legal). We're having an El Nino summer with water temps consistently over 70 degrees...heaven. Interestingly, I swam roughly the same speed with/without a wetsuit (of course, normally I'm faster with wetsuit). I hadn't been paying attention to temps in The Russian River (Vineman swim course) until Saturday when my athlete emailed me a link to this website. It's kinda interesting to watch trends, but it still means nothing to me as to how it'll be Sunday -- too close to call and I'm expecting either scenario and have practiced accordingly.


3) One last brick... and beer. I actually felt better as the week went on. After some mornings seeing HRV in the 60s on average earyr in the week, by the weekend my HRV was 80s average again. As a result, I gave myself the green light Sunday to do one last "hardish" brick before full rest mode. A 30-mile bike with a good portion at race intensity, and 30min T run. It was good except for the heat/humidity (it's hot!) and me being dumb and only drinking one bottle of water over the course of 2 hours, oops. But after drinking sparkling water, kombucha, green juice... I felt replenished... then, what I really was craving was beer. Question: what is it that makes me crave beer after hot/hard workouts? Not water, not wine, not anything else except beer. I'm still not really drinking beer these days minus the occasional sample or special occasion, and I never ever actually "crave" beer expect for those situations after hard exercise. Hm.


Looking Back & Looking Forward
So that all said... it seems like I began this journey into minimalist training just a couple days ago. But here we are and I am entering "Week 8/Race Week" in the build-up to Vineman 70.3, a race that wasn't even on my radar until 8 weeks ago and I race a love (it's my fourth time doing this race btw)! In that time, I think I had some phenomenally effective workouts, and on average it's been 7ish hour training weeks (at most 8:27) with super quality sessions. But heck. Taking a drastic leap into lower volume/higher intensity training, with every week being well under 10 hours total, is COMPLETELY UNHEARD OF FOR ME in training for a half-Ironman (and I've done 12 of them). Can I repeat, I have never trained with that low of volume in the eight weeks before a 70.3 (nor any race for that matter).

In opposition, usually before a 70.3 I'm at 12-15+ hour weeks on the volume train and getting most the work done every damn day whether I feel good or not. At times just hanging on by a thread at times, often more stressed feeling. Don't get me wrong -- the volume has worked for me, and last year I PR'd at both Oceanside 70.3 and Vineman 70.3. But I needed change! Simple!

Anyway I could keep rambling, but bottom line: I am VERY curious to see what happens on race day. It could be a total flop or total success. And ya know what? The "unknown" is thrilling to me. It'll make me a better coach, athlete and person to see how this little change of pace goes. 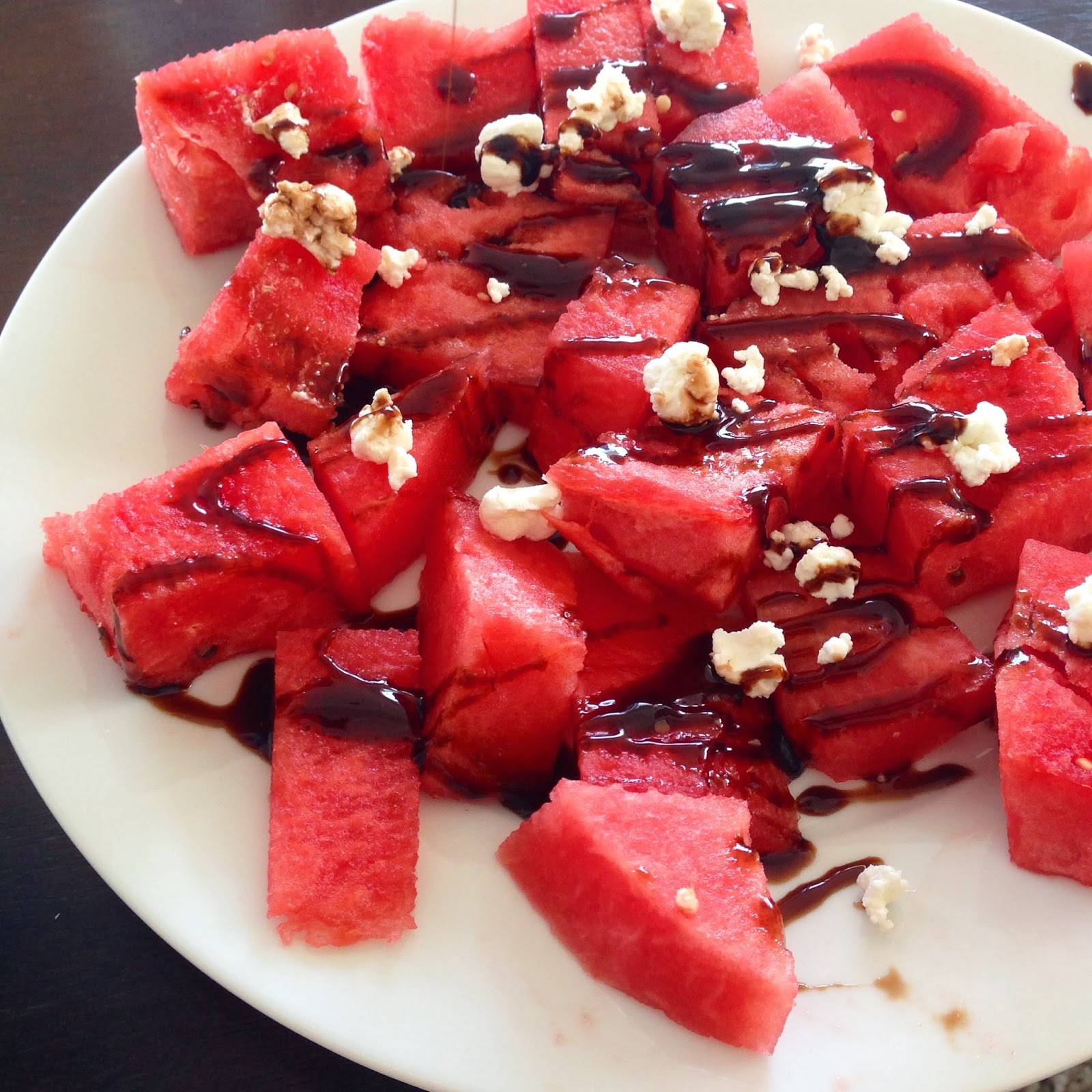 For the record, I'm also ready to talk about things other than training on here soon, like my other favorite topic... food! We had some good eats over 4th of July weekend like braised short ribs and my favorite easy summer appetizer of watermelon, balsamic glaze and goat cheese.