Look at the first two miles of this trail run. XTERRA doesn't mess around. I signed up for this 15K race at El Moro in Crystal Cove State Park -- one of seven in XTERRA's current SoCal series -- before I had run the trail. Ha, that was smart. I have my work cut out for me if I intend to finish with a respectable time. 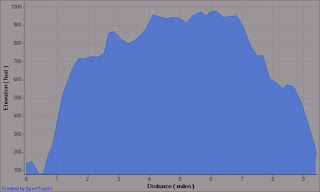 After "running" this loop for the first time, I declared I'd run it every weekend up until Dec. 14 -- race day! That's cause I had to slow down and walk some of the uphills, grrr. However, on round two, which I did last Sunday, I was able to run the whole thing (minus one trail detour I made on mistake). And that was after 52 hard miles (hill repeats) on the bike the day before. Making progress ... that's what matters.

Another thing about this trail that makes it amazing: It overlooks the Pacific Ocean, which not only offers breathtaking sights, there's a nice sea breeze as you run. ahhhhhh... Here's a photo of the scene (not my own; courtesy of mountainbikebill.com): 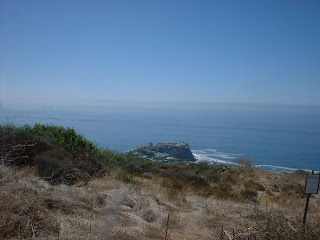 You can kind of get an idea of how high up you climb, given that you're looking at sea level -- where the run starts.

On that note, I've been going crazy wanting to know how much elevation I gain on my bikes and runs. I'm too poor at this point to run out and buy a GPS, so I searched the Internet hoping someone's created a site that I could map out my rides/runs and see the elevation, as well as check out future races that don't provide that info (i.e. Catalina Tri)!

Well I found that sight: HeyWhatsThat.com. You can personally map out your path of any ride in the world and it tells you your elevation gain, grade of the hills, distance, etc..... great for all us without GPS luxuries!

By the way, El Moro is very popular for mountain bikers, too!