Today was amazing. Must have been my breakfast. I've found the perfect pre-race/pre-hard-training day concoction: Slow-cooked oatmeal with butter, milk, a scoop of vanilla protein powder, cinnamon, almonds, fruit and stevia for sweetness! Amazing, I highly recommend.
On to the race. I did the Newport Beach Triathlon this morning, which is a longer-ish sprint: 1/2 mile swim, 15 mi bike, 5k run. It was a fairly flat course, so you basically go all out. I finished in 1:20:14.8.... Got 1st in my age group, 8th female and 96 overall out of 750 racers. I'm super stoked on that, considering there were some legit racers out there. The top male overall finished in 1:05...smokin'!
Pre-Race
Got to Newport Dunes at 5:30 a.m., paid $10 parking (ridiculous!) and set up transition in the dark. That's it, I'm adding flashlight to my race-prep checklist! Saw some of my friends, and made a friend who racked next to me named Carol, an Ironman rockstar who I would later come to find rides the exact same speed as me on the bike.
Swim
The swim was in the very disgusting Back Bay, which is worse than Mission Bay. Straight up nasty. The swim was in a counterclockwise circle, which sucks because I usually end up breathing on my right side only in races (although I always breathe bilateral in practice), so I was looking the wrong way. But I'm getting better a spotting and staying on track. And to my surprise, I had a really good swim! I was out of the water in 13 minutes. And that's including some blind swimming due to heading right into the sunrise. I really felt like I pushed myself and aggressively worked through the crowd, it was a big wave-all women under 39.
T1
So the run to our stuff took forever, no joke like 2-3 minutes! And I think that's added onto our swim because I don't recall touching a mat for quite a while. Other than that, no fuss in T1. In, out & go time.
Bike
A two-loop course on a very narrow street (Back Bay Drive). Mostly flat expect for one steep grade of about 1/4 mile that's repeated. Translation: haul @$$. My goal on the bike is always to catch people who out-swim me, particularly those female calves with 20-24 ages. I passed quite a few chicks today, guys too for that matter, and felt like I was in a good position overall. I also didn't have to deal with a lot of a lot traffic because I was in the second wave, so that was nice. My new friend Carol and I were neck-in-neck literally the whole time, kinda crazy! She's 30-34, so not a threat AG-wise. I did the bike in 43 minutes and averaged about 21 mph. Felt & Zipps did me well.
Here are some pics I took of Back Bay Drive on a pre-race course drive, beautiful area.... 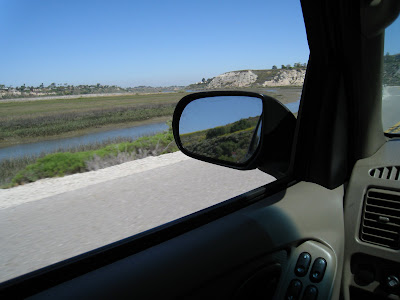 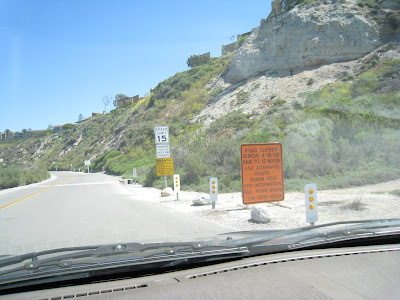 Run
I'll admit, I was most nervous about the run. In fact, I think I subconsciously held back on the bike a little so I'd have good running legs. After Oceanside, there's a bit of fear. But it was only 3 miles, so I was just over-thinking it. Whatever. Biggest observation of the day: I always burp very big whenever I start a run off the bike. Oh man, all that gas just comes out after the position change. Quite funny and definitely not lady like- I totally burp like a big ol' dude drinking Budweiser.

Anyways, feet were a little numb when I started, but things were going well. There was only one 1/2 mile-ish hill to climb. I still didn't see too many women around, so I was determined to keep a good pace going. I had my eye on one woman about 30 seconds behind me. Meanwhile, I saw my friend from swim class, my friend who works at Edge Cyclesports, my ex-boyfriend (random!)...so I was cheerfully saying my hellooos!

20 minutes later I made the left turn into the straightaway to the finishline and that one chick who was trailing me started sprinting to pass me last-second style. Uh-uh! No way was she getting past me! I started sprinting like a madwoman and I beat her! (By literally .2 seconds.) We laughed about it afterwards...I was 1:22:14.8, she was 1:22:15. Turns out I ran a 20:37 5k, impressive for me!

Post-Race
At first I was one of the top females overall, but I got bumped back by a couple smokin fast 40-somethings who started after me and who showed that course who's boss! It was actually very inspiring to see how gnarly these ladies are!! And 8th female is still pretty nice!

In my 20-24 world, I was stoked to grab 1st place. Not a bad way to start off the day, or the still-fresh season for that matter. I also realized this is only my 4th tri since 2007!! Man, did that pump me up to make it a solid post-race training day. 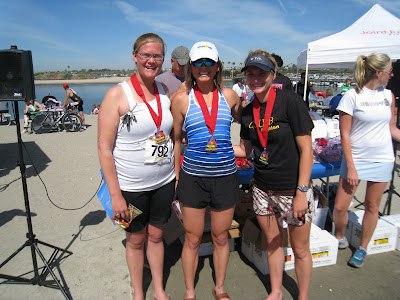 Me and Carol, who got 1st in 30-34 females! Perk of the day: I've found a new riding buddy!! We're both doing Vineman, so good training times ahead! 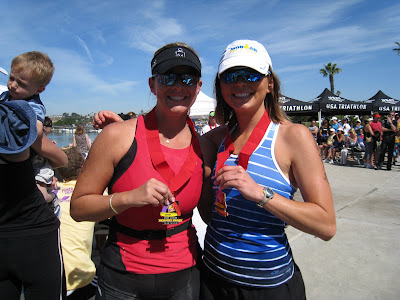 This picture is sooooo special to me! My beautiful grandma showed up to root me on. I don't think I've ever seen someone so excited, and it was awesome feeling to make her so proud! Words can't describe how happy I am that she saw me get that medal. 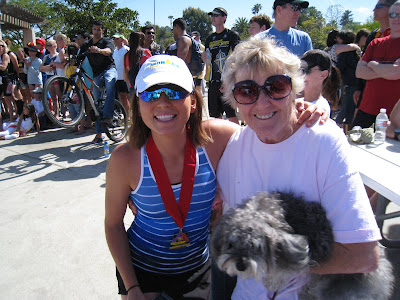 Getting a big Grandma hug and squishing her dog Coco (aww!) 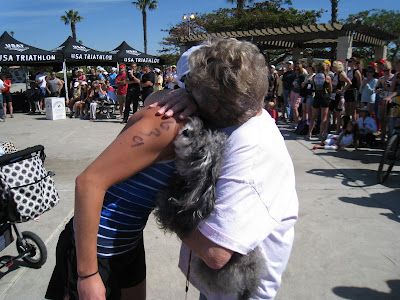 So after all was said and done, I still had a ton of energy to burn... despite the extreme heat (high 90s?) and extreme winds. Hey, to me that means good training weather... makes you tough! So I went out for a spin through Santiago Canyon+. Thought two water bottles w/ Cyto would be enough. Oh man, was I wrong. I was parched after about 15 miles. I stopped at a park to refill, but that wasn't enough. Not to mention, I was battling some major winds! Let's just say, I didn't see too many bikers... only the Harley kind (Cook's Corner anyone?). I cut the ride off at 35 miles to save me from destroying my body.


I stopped by Irvine Lake for a pic, and man I was tempted to go jump in! Holy $@%&! Can you see that sexy stream of snot going down my face...niiiice. 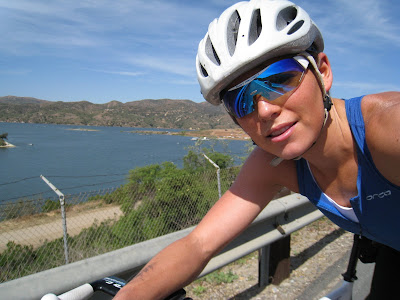 An immediate calorie-dense smoothie followed that ride. It tasted like heaven! I was hungry for dinner merely minutes later, I was a calorie-burning machine today! I'm hungry again just while writing this!!!! 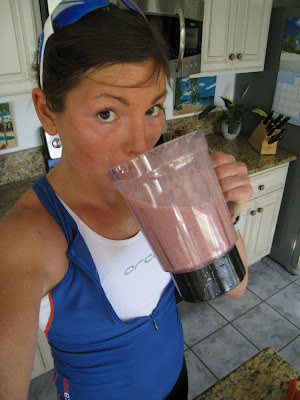