Check out my full race report on EverymanTri.
So for the last two days I've basically sat on my ass and have done nothing. I have never been so sore. I even kicked back with several glasses of wine and a movie on Sunday. Rare. By last night my body was feeling pretty good, which I attribute to the foam roller, mass quantities of food and lots of sleep. So the little post-race vacation is over, and I'm slowly going to get back at it. That started before sunrise this morning with swim. I probably shouldn't have gone and slept in instead (I could tell I'm not fully recovered; my swimming begin to lag about halfway through), but I missed my class, my friends, listening to am radio as I drive to the pool and getting an early start to the day. The cool thing: after enduring the brisk start on Saturday morning, it didn't seem so cold running around in my bathing suit at 5:45 a.m.
I've also signed up for two more triathlons since Saturday's 70.3. I won't be doing Wildflower this year, I'm just not ready. So instead, I'm doing a sprint in Newport Beach on April 19 and the San Diego International on June 28. I might to Spring Sprint in SD too, but all these race fees are getting a little ridiculous considering my income is, uh...well, I don't need to go there. Ha ha.
One more thing....
Checking out his ass During T1?
Huh? Here are a couple more race pictures I find funny. I decided against arm warmers for the bike, but still debated gloves in those frantic seconds. (Cold hands, big issue.) I almost went without them, but still grabbed them and decided to put them on as I was running out. Killed my T1 time but whatever. In the second picutre, it looks like I'm playing with and/or staring at that guy's ass. I swear, though, it's the gloves that have my attention :) 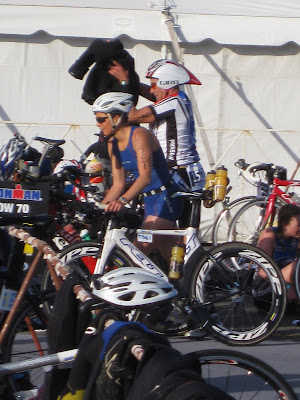 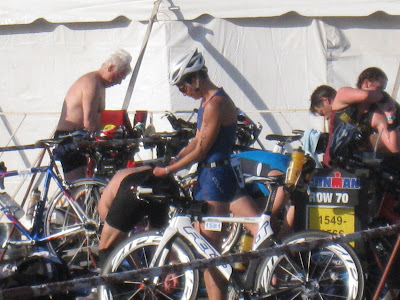