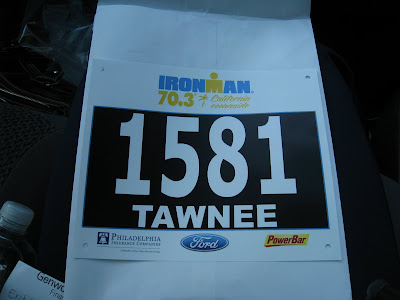 Notice Mr. No. 1 above me? Nice. Also, is Jon Prasuhn the same as Jay Prasuhn of Triathlete Magazine? Hm. Well, we P's rock :) 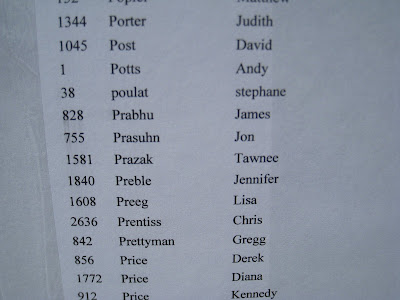 I'm counting down the hours! As expected, this week has been whack. Everything feels "off" from my normal routine and it's driving me nuts. Plus, my sleeping is all weird - I've been getting enough of it, but in abnormal hours. I've also been having the craziest food cravings, while stuff I normally love eating is grossing me out. Weird.
My workouts the last several days have been generally shorter and easier with some intensity mixed in -- how could I not go all out riding with the Zipps for the first time; man I love those things!! This morning I got in my last easy 30 minutes on the bike. During my ride, I was thinking about the day I signed up for Oceanside. It was late September, and I was still at my old job. I was kind of in a funk then. Out of shape coming off the knee surgery, recently turned single, not liking my job so much... and I was ready for a new challenge! I signed up during work; must have been an exciting day at the office.
Headed out for the last pre-IMCA ride 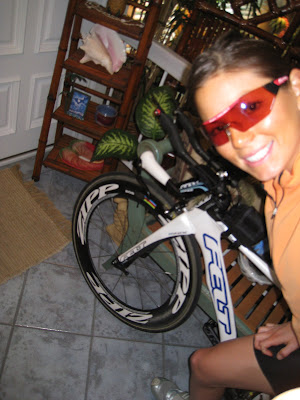 Now with the race merely hours away, I'm so happy I signed up for this. I'm excited, nervous... every emotion! I've been imaging race morning in my head, and one thing I was planning on doing was getting a solid warm-up swim in. Well, that's clearly not going to happen! There's no warming up in the Harbor before the race. Automatic DQ. Period. We get in the water about 3 minutes before our wave goes off, that's it. Gnarly. I'm at least glad the swim is marked every 100 meters, I need that!! 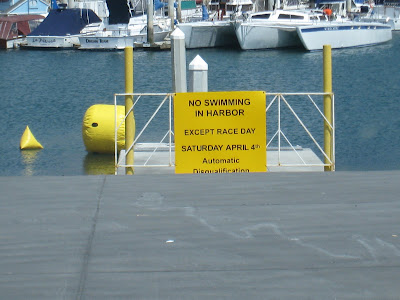 A peak at the swim 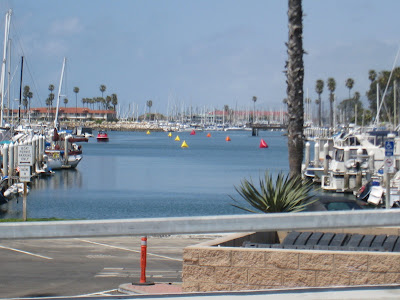 At race check in, the weather was pretty nice. A tad on the windy side, but that's all - plenty of sun, no rain. Hopefully the sunshine sticks. I've been warned about the wind during this race, so that's no surprise. Plus, I've gotten in plenty of training rides in the good ol' Santa Anas.
Anyways, everyone keeps asking, "Are you ready?" "What's your goal time?" Being that this is my first half-Ironman, who knows! I've been dedicated to my training, so we'll see what happens. I honestly don't have a goal time. I'll set more specific goals and put more pressure on myself in future races, once I have some of these longer races under my belt. This is a test run. However, that's not to say I'm not feeling the pressure -- I'm a competitive chick, and I have some gnarly butterflies right now. I want to do well, of course, it's in my nature.
OK, now it's time to go pack up the gear, eat, label things, eat more, check the bike, eat, chill out, eat more, watch TV, eat more, rest. Ya know, typical day-before-the-race routine. Bright and early tomorrow! Well, it won't be so bright...we're leaving my house at 4 a.m. Ha ha.

It's all about getting here . Ahhhh! 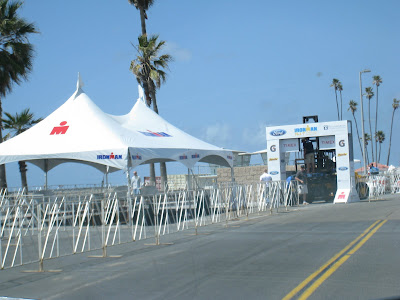