Watching the Ironman World Championships is in the top-5 greatest experiences of my life, so far. With a jam-packed week of amazingness, there’s no way I can fit my whole trip into one blog, so I’m going to break it up into multiple postings. I’ll start with pre-race fun. 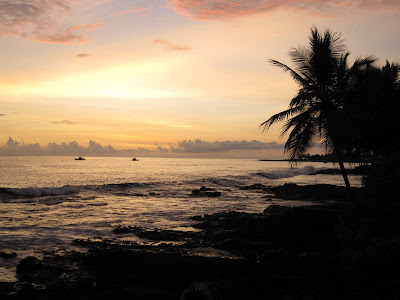 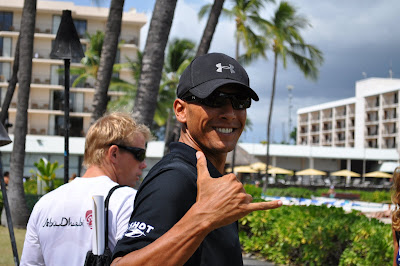 Kona Day 1, Oct. 7
Wednesday was a 22-hour day, but unfortunately only a few of those were spent awake in Kona. Traveling sucks. We finally got in and dropped off our bags at the Seaside Inn (a great place to stay if you want to be within walking distance of all the Ironman events), then went to go pick up our media credentials at the King Kam. Talk about hooked up! I had no idea we’d be getting so much free schwag as "just the reporters." 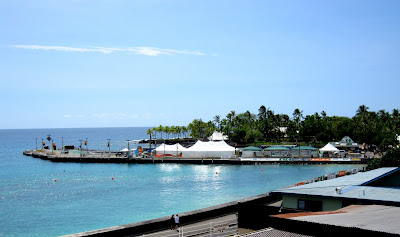 View from the room at Seaside
After that my first mission was to find Lava Java and eat there. Mission successful. Yum. 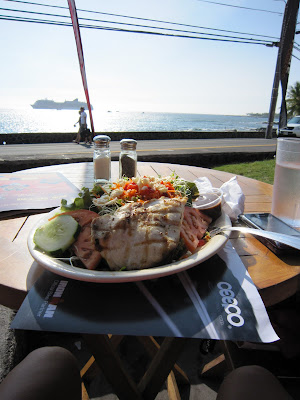 Wednesday night I met up with some local OC people for dinner at Kona Brewing Co. (Thanks Kevin Rauch!!!) It was great pizza, but I skipped the beer that night... would have fallen asleep right on the table. By the time I got back to the hotel I was spent. 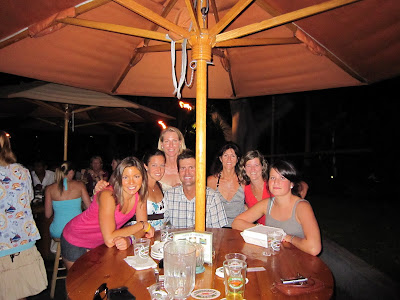 But who sleeps in Kona?

Kona Day 2, Oct. 8
I got just enough shut eye only to wake at sunrise on Thursday for, what else, but a swim at Dig Me Beach along the IM course. I know everyone says this, but it’s truly the place to be in the morning with the hottest bods you can imagine in little itty bitty swimsuits. They put my fitness/physique to shame. 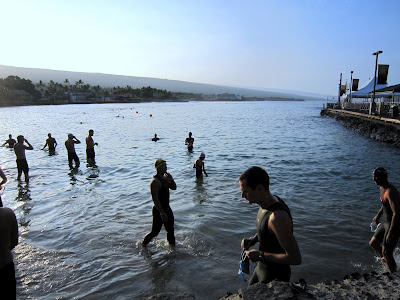 Now, if I had access to an ocean like Kona’s, I’d be one hell of a swimmer. I never wanted to get out, and I was amped to practice swimming straight minus a black line. It's warm, clear water, awesome fish and coral to look at and—the best—there's free coffee 700 yds out! Coffees of Hawaii anchors up to serve fresh brew to all swimmers. The first sip is bitter and salty, but after that it’s actually quite refreshing.
I swam early enough to be at the annual Underpants Run at 8 a.m. But, get this, while swimming back in I got stung by something on my neck (sea lice apparently). It burned soooo f-ing bad. My first though—while still ~700 yds out—was, “Oh crap, I just got stung by some weird tropical thing and now I’m going to pass out, drown and die.” Needless to say, I swam fast.

I survived, but basically had to ignore the burning because I refused to miss the U-Run. I figured running around in something skimpy would be a good distraction.

So fun. I’ll let the pictures do the talking: 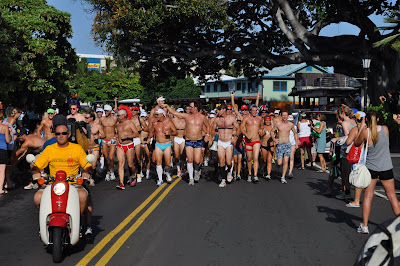 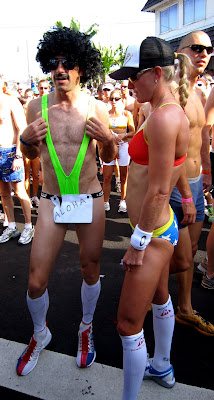 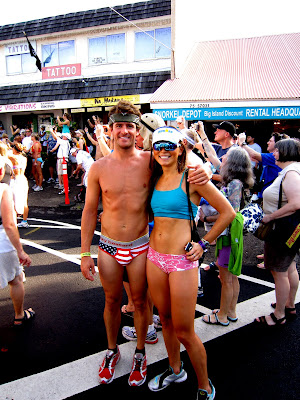 Weird place to run into your ex... Brad and me 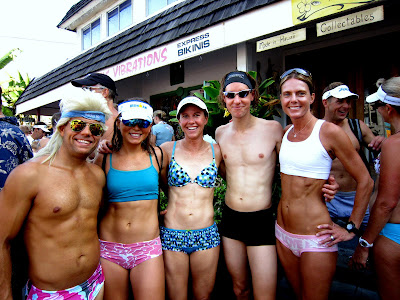 A bunch of fast people (Ian, Charisa, Kevin, Kristin), and me 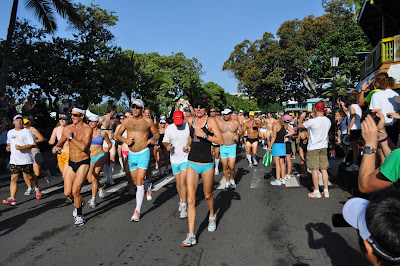 MJ in the lead (photo courtesy of www.finishline-multisport.com)
After that Thursday included more Lava Java, a pro press conference, mingling with media, taking pictures, being in awe. I had to get over my star shock seeing the pros within touching distance. For most the Ironman and media guys, like PNF and Bob Babbitt, it’s no big deal. So I had to play it cool and pretend that it was no big deal for me that I was looking a table lined with Terenzo Bozzone, Eneko Llanos, Faris Al-Sutan, Crowie, Chrissie, Linsey Corbin, Yvonne Van Vlerken, Sandra Wallenhorst, Michellie Jones and Mirinda Carfrae.

My first observation was, wow… I had no idea Torenzo was so hot! He’s funny too… on the topic of speed suits, everyone had to give their opinions and he simply stated, “I think we heard everything and personally I don’t give a shit.” 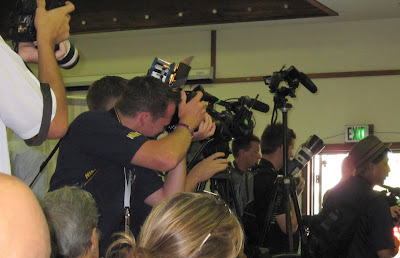 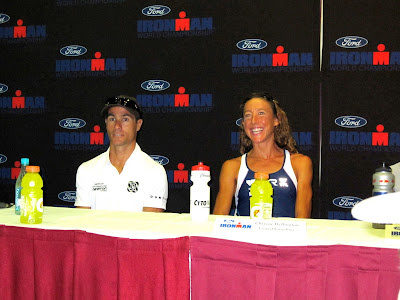 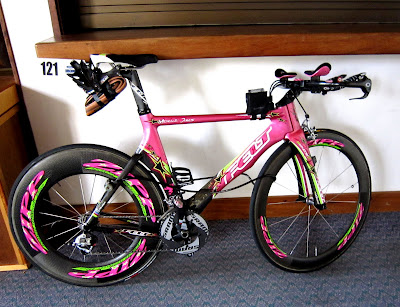 MJ's hot bike
Meanwhile, stinging continued, up into my ear. It eventually subsided, but not before I tried the ol’ pee trick (ewww)…

No, I didn’t pour my pee on myself—to messy. Instead, I peed on a wash cloth and pressed it against my neck. No joke. But that still didn’t work too well. So, while eating at Lava Java, I asked the owner for vinegar and napkins. He asked if I wanted white or balsamic.

Thursday was also my first taste of running in Hawaiian heat and humidity. Holy crap, 5 miles never hurt so bad. It made me glad that I didn’t qualify for Kona yet. I’m still in my infancy phase with triathlon, and definitely have no rush to get ahead of myself.

After recovering from the heat, I’m pretty sure I ate dinner at Lava Java that night too. I invested way too much money there in a matter of days. But the free Internet was convenient and the crowd is always entertaining . 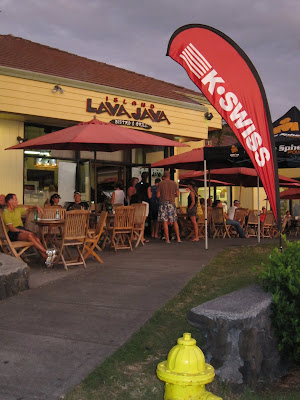 .
The partying started Thursday night, but I opted out. I was still in my “I’m doing Clearwater so drinking and staying up late is not part of the plan” phase. That soon changed on Friday, Saturday and Sunday nights. Ha. You only live once, right?
Stay tuned for more.... and if you want to see all my Kona pictures, friend me on Facebook.
Posted by Tawnee Prazak, M.S., CSCS at 8:57 AM