To start off, I want to throw out some numbers that were mentioned during the Ironman Awards Ceremony:

I got in another swim along IM course first thing. To be honest, the first day I was so caught up in the excitement and the free coffee that I didn’t get in a regular butt-kicking sorta swim. So Friday, knowing the course better, I spent a solid hour pushing myself, mainly working on swimming straight while maintaining intensity. I ditched Lava Java and opted for post-swim brekkie (veggie omelet) at a restaurant where I could watch the finish line being built. The lady said there were a lot of veggie omelets being ordered lately, go figure. 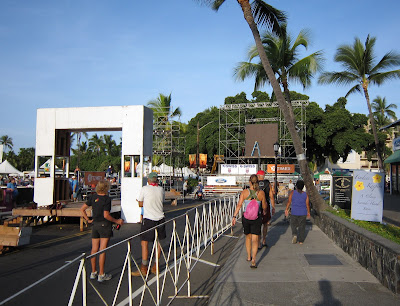 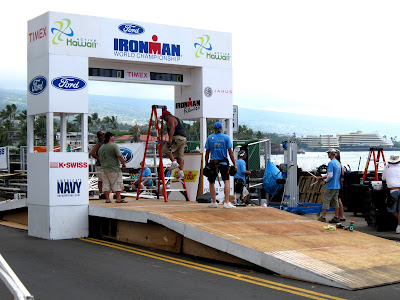 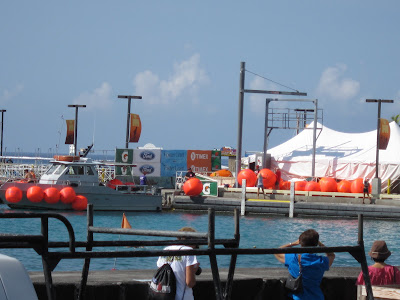 With less than 24 hours till race start, there was definitely a different vibe in town on Friday. You could feel the tension in the air. No longer were cyclists and runners passing by every 0.5 seconds. Instead, participants had to drop off their bikes, and some clearly had the wide-eyed, “holy sh*t what have I gotten myself into” looks as they marched down . Others, like Linsey Corbin and Faris Al-Sutan were all smiles (photos courtesy of www.finishline-multisport.com): 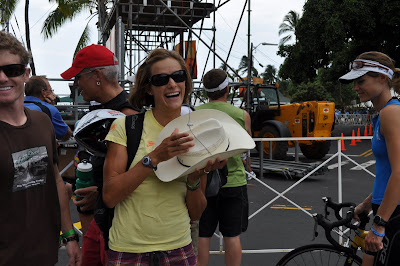 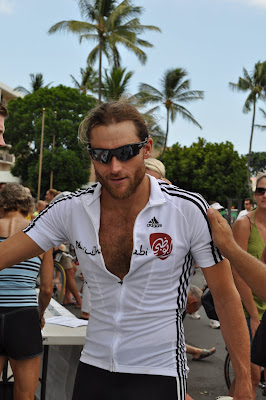 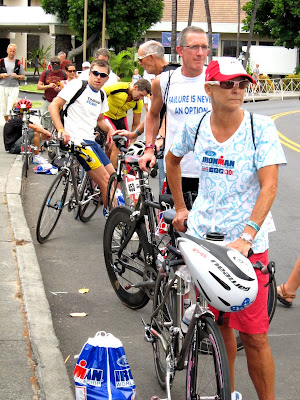 Kevin of finishline-multisport.com and many others opted to post up at transition all day to watch every single person check in—a great op to meet pros, photos, etc. Plus, it’s Kevin’s mission in life to be friends with everyone in triathlon. I must say, he’s doing an excellent job at it so far. On the flip side, for bike companies and such, this is where they tally how popular they are at Kona. How many people rode Cervelo? We’ll know soon. 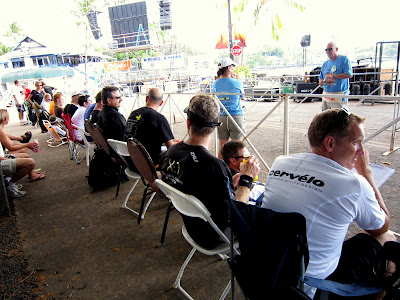 I’m a little ADD, so I knew I wouldn’t be able to stand at transition all day. 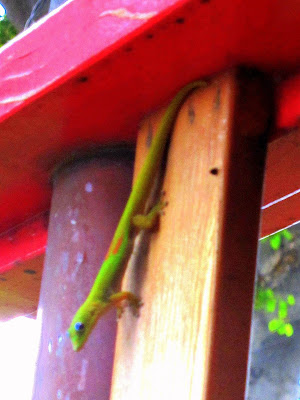 Instead, I met up with friends (and made cute new friends like that little dude above) then went for my run, which went a lot better than Thursday’s—I could hold a decent pace and went farther...about 7 miles. On the way I was refilling water and chatted with some local surer bros. It’s was the typical “dude, yea bra, surf or die” sort of convo. I loved it because I had been talking triathlon nonstop and hadn’t even thought about surfing in paradise. Unfortunately, I never had time to do so, but I at least learned where some good spots were from the dudes.

While we were chatting, Torenzo Bozzone ran by—one last quickie—and I pointed out to the surfers that he was in contention to maybe win. Their response, “Dude, that guy has tiny little chicken legs, no way bra.”

I eventually made it to the bike check in that afternoon. Through conversation and thanks to Kevin, I landed a spot in a car that’d be going out onto the bike course during the race. The driver was Mario Huys, a former pro and coach of Yvonne Van Vlerken and rookie pro Mickey Weiss. Mario is such a nice guy—a heavy German accent so hard to understand at times, but I always nodded, smiled and asked more questions. I felt honored that I’d spend half of race day with him. Mario was 11th in Kona the year I was born. Mario's in the middle here: 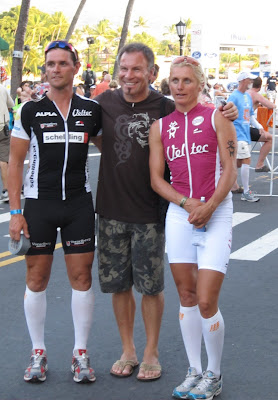 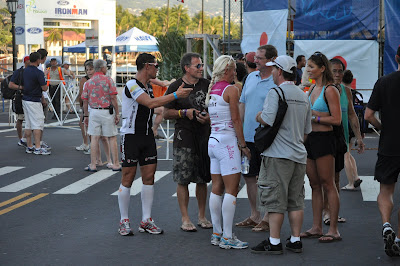 I also got a chance to meet Rebekah Keat and her twin sis. Super nice girls. I'm really bummed she got DQ'd after the race. I don't know the whole story, and even if I did, it's not really my place to discuss that sort of thing. All I know is she's a phenomenal athlete and she would have been 5th woman had her race counted. I mean, look at her calves compared to mine; she is pure muscle (photo courtesy of finishline-multisport.com): 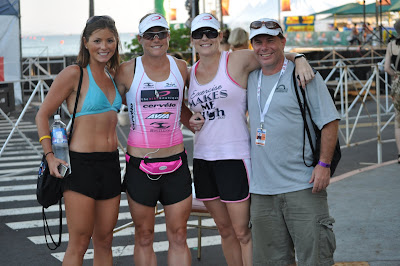 I stayed at transition until everyone was checked in and it became a ghost town except for the overnight-watch crew, several photographers and some nearby local fisherman. 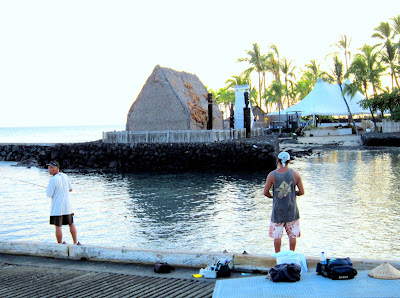 Seeing all the bikes lined peacefully was awesome. There was no turning back now for the 1,779 racers. 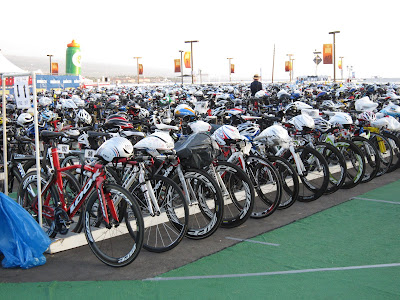 I talked to one overnight guard, and he was so honored and proud to have the responsibility of watching the bikes. His enthusiasm almost brought tears to my eyes. Here he is: 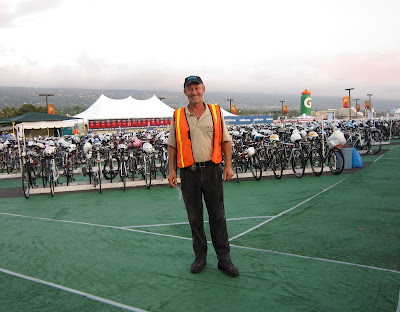 I also couldn't help but laugh at the placement of the Penalty Box. There's no excuse for cheating or whatever penalty is issued, and the officials clearly don't take it lightly--they really must want the perpetrator to feel in the dumps. 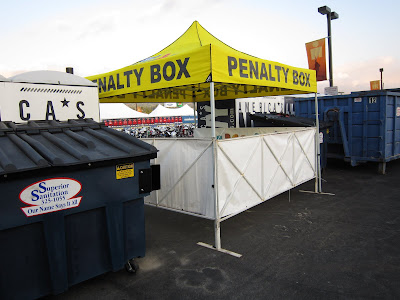 We spent the evening soaking in all the sights. It was like the calm before the storm. Only hours and the place would be going off! photo courtesy of www.finishline-multisport.com: 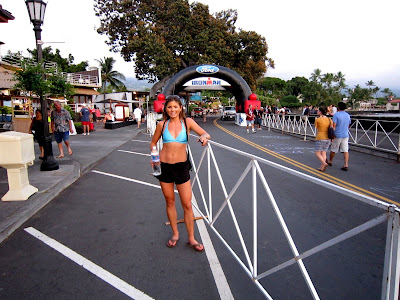 Luke McKenzie getting in One. Last. Run. 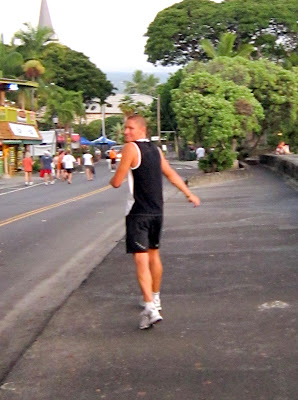 That night, after hearing how cool and fun Thurs night was, I joined the party people at Lulu’s. The guy I was teamed up to work with, Ben Greenfield, got me to drink a foo-fooey cranberry vodka because they are “healthier with less calories than beer.” Whatever, it takes fewer to do the job, so I obliged. 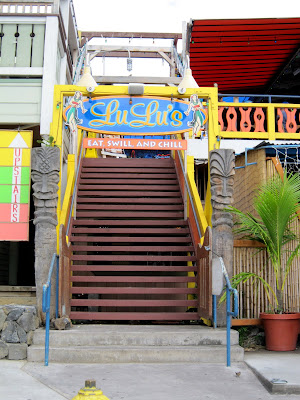 Some dudes showed up, we were all talking, and one happened to be Cliff English, Chrissie Wellington’s coach for a brief time. For those who don’t know, Chrissie has had a tumultuous year with her coaching/team situations. From TBB (Brett Sutton) to Cliff to currently being self-coached. So, I had the balls to ask Cliff the story of what happened with that whole ordeal—particularly why he’s no longer Chrissie’s coach—and he told me! It was an amazing story, and I’ll keep it at that. Cliff is a great guy and I was honored to talk with him.

I found my bed at 1 or 2 a.m. Sweet. I would be waking up at 4 a.m. to head to the race. Maybe not the wisest way to lead into what would be another 20+ hour day, but, again, who sleeps in Kona? I’d worry about that later.

(In fact, as I write this, I’m back home and am catching up on all that sleep I missed: I've had two 10+ hour sleeps since I've been home—rare for me—plus I napped yesterday too.)

I’m saving the Race Day blog entry to be it’s own post. But here’s a little preview. Dean Sprague of was in our group at Seaside so I watched him eating his pre-race breakfast (gotta note what the fast guys do, right?). Well here’s part of what he ate: 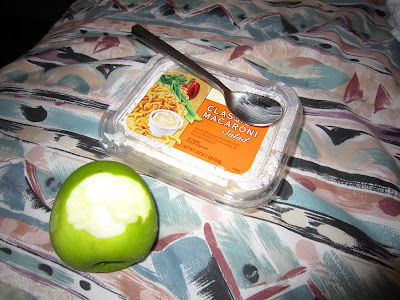 The other part was some Pop Tarts and a GU-mix drink. Classic. And, hell, he raced well so guess it worked! Keep in mind, this is also the same guy that bought us beers the day before and had done his share of partying in the nights leading up to the race... 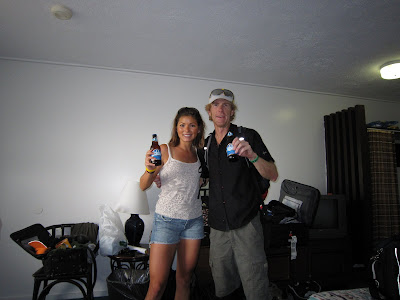