First, some timely news... I got this in the mail Monday: 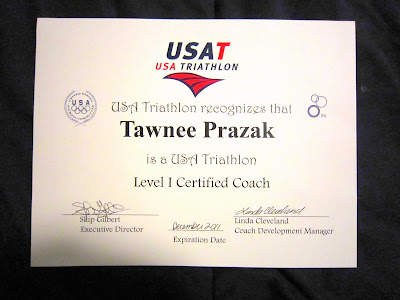 I'm really excited to put this to good use, and I have some great plans heading into the new year!

Anyways... back to Hawaii. I'm sure you're all getting sick of hearing about it by now, especially D, so I promise to make this my last Kona post, and I promise to keep it short...sort of. But I will have a little ranting toward the end, so, D, I think you'll like this one.

The day after Ironman was a little bit like the day after Christmas, and that's coming from someone who didn't even race.

Sunday we all slept in then spent several hours in the Media Center uploading, editing, writing, Internet-surfing and consuming all the free coffee and fruit stomachable (a word?). The goal of the day was to feel good for the Awards Ceremony and post-race parties that night.

An afternoon swim helped me get some energy back, and by 6 p.m., I was eager to get the fun started! Awards had great food, not sure what it was to be honest, but it all blended well on my plate Thanksgiving-style. Plus there was “free” beer (with the $48 admission).

To sum up awards, check out this video on EverymanTri.com. 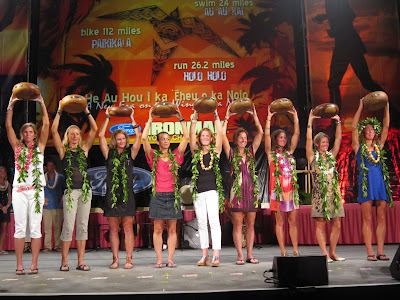 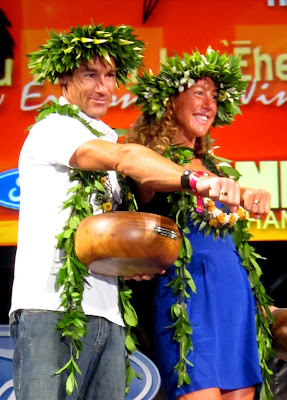 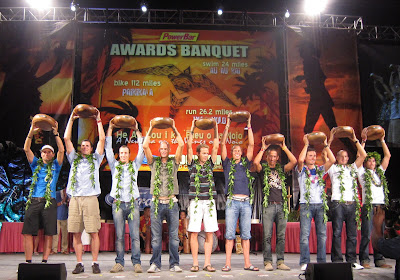 Kevin and I ran into Hilary Biscay at awards, and of course Kevin knows her, so thanks to him, he had Hilary add us on the list for the K-Swiss party. Sweet!

Well, en route to the party, just after awards ended, the downpours began. Last year during Awards it rained, this year it waited until right after. But that wasn't stopping us. We got wet but made the ~1 mile walk to Huggos where the real fun began. 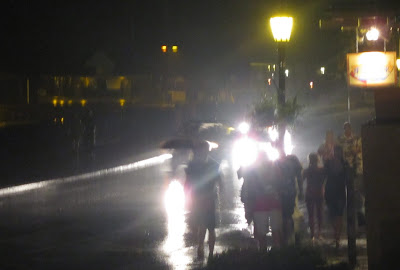 Not gonna lie, I was initially intimidated by the all-star crowd—all the top pros, all the top names in triathlon, pretty much everyone except Crowie. It’s one thing to see the pros in a press conference or racing, but to be mingling with them at the same party? It was too much. It took a while to get brave and just go up to people like Andy Potts, Chrissie Wellington, Belinda Granger, Faris Al-Sutan, etc, etc and strike up conversation. And when I did, I tried not to be “that person”—like the teeny-bopper wanting Britney Spears' autograph. Still, I wanted to take pictures with everyone and of everything, but I contained myself and kept it to just a few, including: 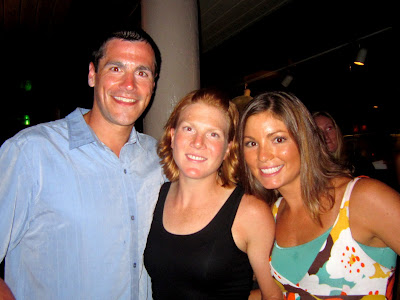 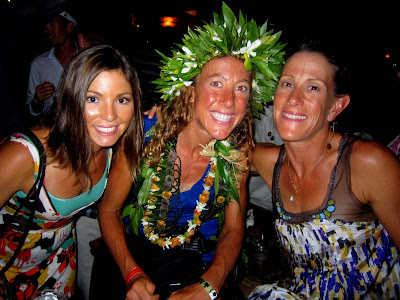 We all got kicked out of Huggos too early… so everyone migrated across the street to Lulu’s. Even Chrissie was still energized to keep partying (what is this woman made of??). I have to say, besides hanging out with my new super cool friend from Gu, I think Faris Al-Sutan wins for being the funnest person to meet and talk to. And he was lookin good freshly shaven too... he said, "I didn't want to look like an 80-year-old man anymore." Ha. 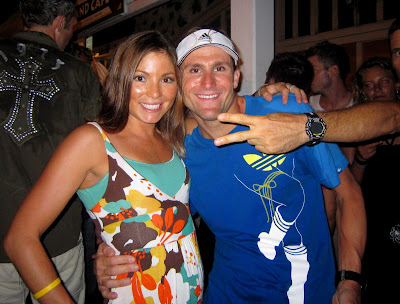 I didn’t want the night to end. But sadly, it did. Still, not after everyone hung out in the parking lot after Lulu’s kicked us out too…. talk about stamina among the triathlete crowd.

MONDAY
Most people were leaving town, so I was ready to start enjoying Hawaii minus Ironman.

But first, I hit up the Stand-Up Paddleboard Demo at the King Kam with Chris Lieto, the Multisports crew, Surf-Tech, etc. Got lessons from Lieto and it was a blast. I felt comfortable, it came pretty naturally to me, that is, until I tried tandem with fellow media dude, Kai, from Germany. We ate it a couple times, which was refreshing more than anything! 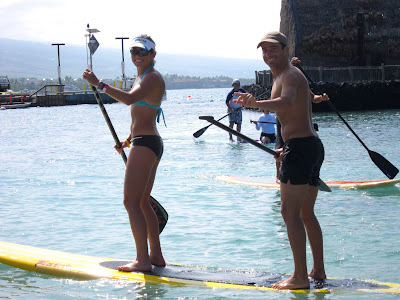 Also hung out with Jessi Stensland a bit and learned about her new MovementU classes. Really good stuff, and great CEUs for coaching! I’ll be attending the Nov. 7 session in Lake Forest. 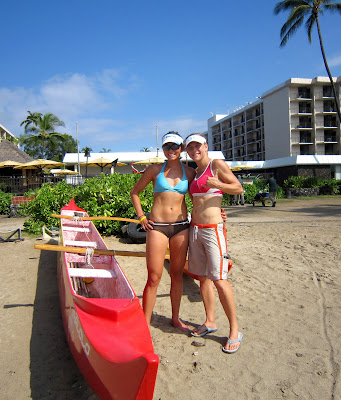 After SUP, I headed out for a 1-hour ocean swim (battled some gnarly chop!), refueled then rented a moped to venture beyond my little world on Ali'i. Glad I did. It was so refreshing to cruise around, see the sights and work on my tan. 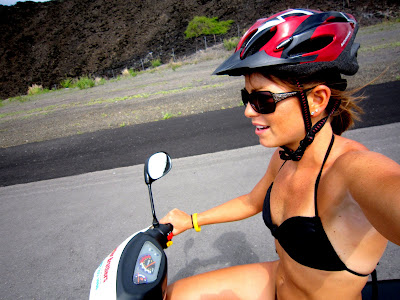 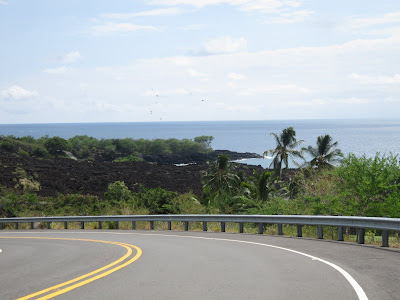 I even made a pit stop at Target for some cheap snacks and more gum (I’m a total gum addict, it’s bad). After moped-ing for the full 2.5 hours, I got in a 7-mile run. I was feeling really good—actually getting used to the heat, or maybe it’s because I waited until sunset (i.e. cooler temps) to run. Another good night ensued, but this one was alcohol-free and early to bed!

TUEDSAY
Got in my last hour swim and 45-min run then hit up the farmer’s market for the last time to stock up on fruits and veggies for the trip home—I knew I wouldn’t want to spend $30 for a crappy airport meal. Before I knew it, I was in the taxi waving goodbye.
Then the dream vacation turned sour...
The airport situation was a disaster. I don't recommend flying Mesa Airlines aka Go Air; I learned the hard way that they have a bad rep for canceled/delayed flights and planes with air-conditioning issues. My 4:40 p.m. flight to Honolulu got delayed until 8 p.m. So about 6 hours of sitting in Kona. But that’s not the worst of it: We got to HON at 8:30 p.m. and due to some other BS I dealt with before the trip (rescheduled flights) I supposed to pick up my bags, recheck them and go thru security again—all in time for my 9:10 p.m. red eye back to LAX on AA in a different terminal. 40 minutes to do that? Uh, no chance in hell.

So, what else: I started crying. I swear, it works (for girls, at least). In no time, I had at least 5 airport staffers trying to help me get over to AA while searching for my bag and getting it over to my red eye (I won't even mention the other major mess up by Mesa). Meanwhile, I basically said screw my bag, left it in the hands of the airport Gods and started running because if I missed the 9:10 flight, I’d be stranded in the airport overnight and AA would charge me $200+ to take the next available flight out in the morning because Mesa’s delay “was not their fault.” Argh!

Well, the airport Gods were watching over me: I made the 9:10 flight (got a crappy night's "sleep") and when I got to the LAX baggage claim on Wednesday morning my bag was the first to fall into the carousel. (First off, meaning it was the last on!!) My heart dropped, and I said a mini prayer thanking the folks who helped me in Honolulu in particular.