I have tons to do today, including getting a new cell phone thanks to a silly mistake on Saturday night, so a real race report on Clearwater will certainly be up soon. But for now, here's a few thoughts (and photos) from my Ironman 70.3 World Championship experience: 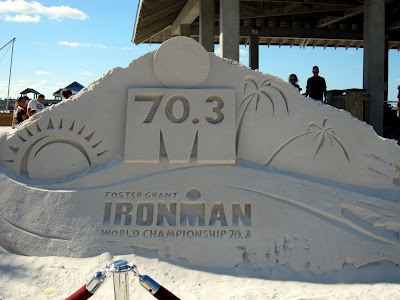 1. Drafting
Yup, it's all over the place. Here's how I dealt: I didn't go into the race with hopes of landing on the podium. I knew jumping into a peloton of riders would be my only shot at moving up the ranks, and that just was not worth it to me. So I'm proud to say my bike time was all my own effort; I refused to get caught up in a big group, despite many opportunities to do so. However, in letting the many pelotons pass, I was forced to slow down majorly—like get up out of aero, stop pedaling and go from 23-25 mph to 15-16 mph to let the pack pass... every time it felt like an eternity. I'm certain my bike split would be at least 4-5 min faster had I been able to keep going my own pace and not slow down to avoid draft packs. It's crazy that drafting, and honesty, can slow you down from your true potential. 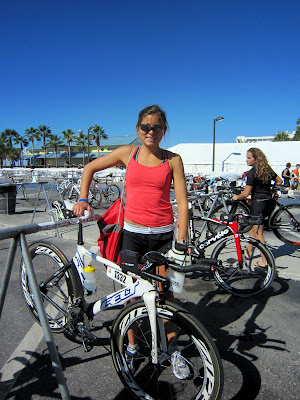 My swim has improved by 4 minutes since my first half-IM this year at O-side, and my run by about 5 minutes. I wanted a better run, I know I could have executed a better run based on how training was going, but Saturday wasn't my day to do so, mostly because of my knee. As for the bike, given my blatant slow-downs and vow to ride on my own, I'm content with my time and the improvement I made.

4. The knee
So, what's up with my knee? Well, I've had a lingering "issue" for several weeks now—I've been in denial (an "If I don't acknowledge it, maybe it will disappear" sort of thing). But it's there: Medial pain on my R knee (from surgery? who knows). The pain subsided during taper, so I prayed that meant it was gone for good. Nope. As soon as I hoped on the bike, I felt it. I was literally wondering if I'd be able to run the full 13.1. I took Ibuprofen the days before, during and after the race to mask the pain (5 or so?). But I think wanting to finish the race decently well no matter what helped more than some pills. Hopefully I didn't do a lot of damage by running on it for that long. Thankfully, as of now, Sunday, I'm not in constant pain. I'll find out what's really wrong as soon as I can get in to see my knee specialist.
Me on the right: 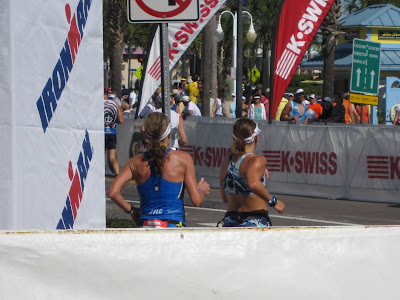 5. Everything broke and now I'm broke
My bike: When I picked up my bike from TriBike Transport it was making this awful grinding noise and each revolution felt clunky—definitely not normal, not good. Ahhhh!!! Took it to bike tech, and in about 1 min, Taz determined I needed a new chain. What a rookie! $100 later, my bike was repaired and raced beautifully.
My watch: My trusty Timex watch also saw it's last days in Clearwater. Thankfully it waited until after the race to die on me. I'll miss that little guy, he's been through a lot with me in the last couple of years and never failed me. I'm thankful he held on for one last hurrah.
My phone: On Saturday night I was washing my face, and it was late. Like 1 something in the morning. I had just gotten in from the night's celebratory festivities and, yes, I had consumed alcohol, but by no means was I wasted. Just exhausted (rightfully so!). In one clumsy sweep, my cell phone was in the sink, in a pool of soapy water. It's still hanging on by a thread, but I'll be getting a new phone asap.

Conclusion: Triathlon = $$$$$. Doing Clearwater all on my own—no travel mates, no sponsors, no financial aid—wasn't cheap, but it was worth it... The nightly view from my room: 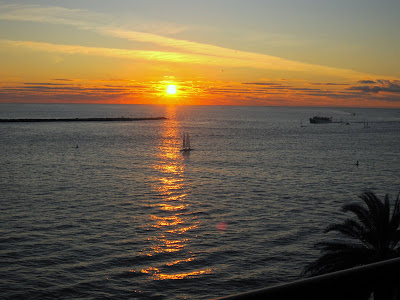 And on that note, family and friends be warned: this coming holiday season, instead of presents you can expect big hugs and homemade "stuff" from me.

That's it for now. back to work for me. I'll have my full race report in a couple of days. I have lots of good stories, so stay tuned!
Posted by Tawnee Prazak, M.S., CSCS at 7:39 AM