The sun shining. The days are longer. School's out for summer (well, sort of). No more bundling up to train/play outdoors. Ahhhh. Love it.... The below picture from earlier this week says it all. And this year it's all about being consistent with one more thing: sunscreen! 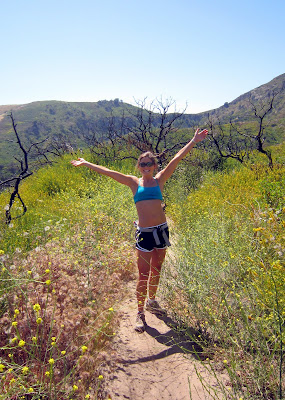 Unfortunately, I've probably done irreversible skin damage in my 25 years on earth. As a SoCal-native, I became a sun-worshiper at about age 12. Tanning was a huge deal all through my teens and early 20s. We'd spend countless hours at beaches and pools laying out; tanning even interfered with school sometimes, oops! Worse than missing school, though, was choosing tanning oil instead of sunscreen. Ouch. I have Spanish/Mexican in my genes, so I never fry and am able to get a deep tan compared to those fair-skin folks. However, that's no excuse for no sunscreen.

Fast forward to now. It's not too late to change my ways. And there's good reason to do so. I'm certain I spend more hours in the sun now training than when I was a California-teen beach queen.

Problem is, I hate most sunscreens. They don't survive all the sweating and hours, they're oily/greasy, they cause me to breakout and the worst: that oiliness attracts bugs/dirt/grossness that sticks to my skin when I work out, ew. In short, the average sunscreen seems to be more hassle than good. 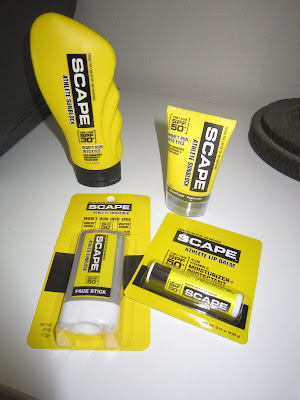 A brand-new line of sunscreen products with the endurance athlete in mind.... Just what I need to motivate me to wear sunscreen! I'll jump on almost any bandwagon that involves endurance sports :) I received several SCAPE products recently, and I can say with 100% honesty that I've never been "excited" about sunscreen. This stuff is the real deal. It lasts. It works. I actually want to wear it. (Inevitably, I still get somewhat tan, but at least I know I'm protected against the most harmful rays.)

Most importantly, SCAPE is easy to put on and it's not oily and gross. My favorite is their 50-SPF face stick that's applied like deodorant or Blody Glide. There's also 30- and 50-SPF lotions, sprays, lip balm and more. A little goes a long way, so don't expect having to buy more 24/7.

Oh yea, I almost forgot... when your head/face sweats, SCAPE won't get into your eyes and sting like crazy as if you're going blind. (It's no bueno getting sunscreen-eye-sting-blindness while going 35 mph on your bike, scary!)

I'm not trying to be some big ad here, but it's that time of year when skin protection matters more than ever. Being a recovering sun-worshiper, I now see the importance in skin protection and I want to share this little secret of SCAPE with my endurance friends. When we get to have amazing days outside (i.e. picture at top) it's important to take that extra step and protect your skin!

SCAPE is available at Trisports and Road Runner Sports. Get some and go enjoy a weekend outside... I'll be wearing SCAPE during the OC Duathlon tomorrow!
Posted by Tawnee Prazak, M.S., CSCS at 11:01 AM