So Ron made a good point in his last comment that my blog is more educational than personal lately. I've kind of been doing that on purpose because my personal life is pretty mellow right now--no epic training, racing or trips to talk about; work is work; nothing new at school. It's nice having a break from my usual 24/7-busy lifestyle. I can enjoy summer and a true offseason. Go surfing on a whim. Noon masters instead of 6 a.m. (although I love getting a 6am'er done). Catch up with random friends I never see. Make my own hours. Have a glass of wine. Never miss the Tour. Get creative in the kitchen. Oh, and I can put more thought into educational-ish blogs :) Plus, given my injured state, I've also dubbed this my "summer of savings" i.e. saving money now to play later -- got kona in october and more big plans for 2011.

The biggest gossip in my life? My last two test runs ended very badly, for a couple reasons. The first, a 25-min treadmill run about a week or so ago, ended abruptly at the onset of pain, and the pain just got worse the rest of the day. But it was 100% gone by the next morning. Go figure. Still demoralizing.

The second "run" was Friday; it was really more of a walk/jog with an unplanned sprint home. We (doc & I) decided to give it more time until I really run again, so I was just out enjoying exercise (if you can call it that) after doing a morning lake swim. The knee was fine every time I jogged, so I was happy.

But then shit hit the fan.

A damn bee landed on my face, so I swatted it away but it somehow landed on my back and stung me near the shoulder blade area. I couldn't see it so couldn't get the stinger out. I sprinted home hoping I'd see someone along the way for help, but no one! About five minutes later, my mom flicked out the stinger, but the damage was done--I took on a lot of venom I think.

I got really hot, itchy and swollen almost immediately. I took a cold shower. No relief (except when scratching my head while washing my hair--fingernails on the scalp never felt so good). Next I tried laying on the floor with ice packs covering my body. Some relief. But redness everywhere. I wasn't sure if I really had a rash/hives or if it was an illusion. Oh, it was a rash (pic doesn't even do it justice), ewwww... 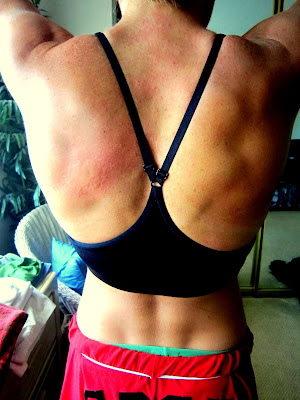 I know I wasn't in anaphylactic shock and didn't feel too terrible so no way was I going to the ER. Toughed it out, and sure enough the rash subsided within a couple hours and I continued on with life as usual.

Now it just feels like I got stabbed in my shoulder blade. Hurts like a mother! Thankfully I've gotten in 10k worth of swimming and rowing this week, so can give the upper body some rest.

And, oh yea, that unplanned 5-min sprint home was no bueno for the knee. For the rest of the day, I couldn't walk without pain. But woke up the next day with no pain at all. Ugh! This injury is tricky and frustrating as hell. It seems like I'm doing everything right for recovery except completely giving up all forms of exercise. Ugh, that would be the worst... I barely do anything as it it these days. I just want this to end!!!