Good news: Looks like my IT Band is cured. All those original issues are gone.

Bad news: Something is still majorly wrong in my knee. What exactly? Not sure. But we may be on the right track to knowing.

Symptoms: Pain deep in the knee (pretty sure swelling in the joint capsule making it worse); pain that starts on the lateral side and radiates medially; pain on the posterior (back) side. Any knee experts want to guess on what this could be? Read on for our latest diagnosis.

It's sort of like the chicken and the egg. Did my ITB issue cause this knee problem or did the knee problem aggravate/cause ITB issue? When I first got injured, everything was a mess so I can't really say what hurt first. But now this knee thing is getting worse while my ITB is feeling good to go.

I was thinking it might be plica syndrome, which I had in my L knee in 2008. Why? Because if plica happens in one knee, there's a good chance it can happen in the other. It's a weird issue. But some of plica's main symptoms aren't there, like no clicking/popping. And plica usually happens on the medial side.

So then I think, crap, I'll probably have to get an MRI to really find out. But with my stupid insurance I have to meet a $3,000 deductible before they'd even consider partially covering an MRI. I'm no where close to meeting that deductible, so paying full tilt for an MRI? Um, would rather not! So that's Plan B - worst case scenario.

Thankfully I saw my ART/chiro today and there's Plan A. He specializes in sports med and knows his shiznit, so we spent a lot of time doing knee tests, and he agreed that I don't have the symptoms of plica syndrome, nor a meniscus injury, ligament tear, etc. But, really, only an MRI could tell for sure. Blah.

Then, during one of the tests, he hit a spot that created the same painful sensation I get during/after running. The spot was my popliteus tendon. It was sort of a eureka moment for us. 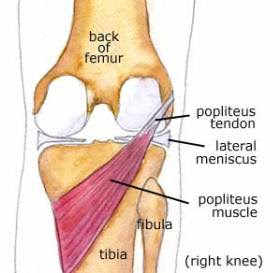 As you can see, the popliteus muscle is a short diagonal muscle behind the tibia and knee that comes in contact with the joint capsule, crosses with the hamstrings and gastroc (calf muscle) and attaches on the lateral side of the femur. Popliteus tendonitis is an overuse running injury in many cases, but often hard to diagnose and gets confused with meniscus injuries. Internal rotation, inward rolling of the foot (pronation - I do it) and downhill running can irritate the pop tendon.

Bottom line is: popliteal tendon issues can wreak havoc similar to what I'm going through: causes joint swelling/pain, posterior pain and pain/inflammation of surrounding structures--this type of exacerbated/chronic inflammation is no longer that "good" inflammation I spoke of before. Still, no NSAIDs :)

So that's where I stand now. Plan A is to do nothing except swim and strength train (going easy on lower body) for the next week or two, continue intense treatment on the knee and go from there... holding onto hope that we've found the answer and I can avoid MRIs and surgery.
Posted by Tawnee Prazak, M.S., CSCS at 1:05 PM