A different kind of racing

Another atypical weekend is approaching. I'm heading up to Monterey to go celebrate and watch some fast RACING. This time it involves cars and horsepower instead of TT bikes and human-produced watts. My grandpa, Dan Gurney (mom's dad), is being honored this weekend for his lifetime achievements and influences in the auto-racing world.... 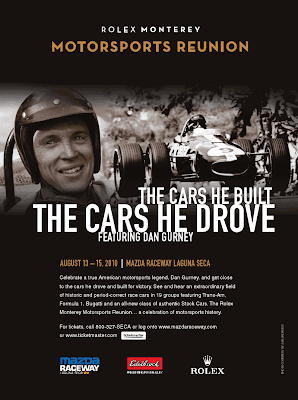 It's a big ordeal at Laguna Seca raceway with classic cars, lots of races, cocktail parties, fancy dinners, VIP status, mingling with "big names" (will I even recognize the "big names" of this world? who knows).... Yup, pretty much all things that are never on my typical agenda. I love it! Just hope I can find a gym or a pool for some workouts :)

When I was a kid, my grandpa's fame intimidated me. But that changed to admiration and respect as I grew up and learned about his career and image as a sports icon. Choosing to be a racecar driver back in the '40s-'50s wasn't an easy nor lucrative career path, and he definitely struggled early on. But he never gave up, and his dreams and passion led to immense success. He made it. Big time. And decades later, he's still going strong. I can only hope to have the same amount of success by following my passion. But so far I'm only in the "struggling" phase :)

To put his fame in perspective, back in the day ('60s-'70s) when auto racing was a bigger deal than it seems to be today this was a popular bumper sticker:

Ha! Even better... He's won countless races all over the world and built winning race cars for years, but the one thing my gpa did that I LOVE to brag about is this: He was the first one ever to spray a bottle of champagne over a crowd after winning a race. Racing & alcohol... I definitely know I'm in the right family. Work hard / play hard :) 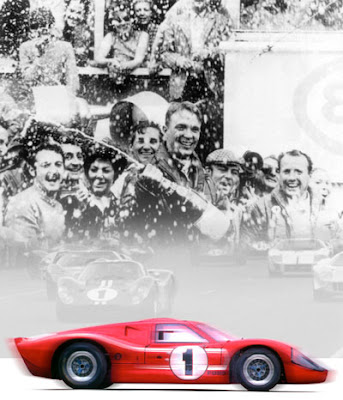 So, yea. That's the plan for the rest of my week/weekend. A different change of pace from my usual endurance-sport-focused adventures, but I guess auto racing is an endurance sport in a way, just with a motor! I mean, some of those races go on and on and on, crazy. (By the way, my family thinks I'm slightly crazy for my non-motorized triathlon pursuits.)