I've sat down like 18 times to start this blog, but it's not easy. There's just so much good stuff to talk about when it comes to Hawaii + Ironman. I'm not gonna lie, it's been pretty cool NOT qualifying for and racing Kona yet; I think I have more fun just floating around the scene stress-free for the week+. What will I do if I ever qualify... No Lulu's before the race? No pre-race adventures and craziness? Ah! I think I could handle it if it came down to that ;) 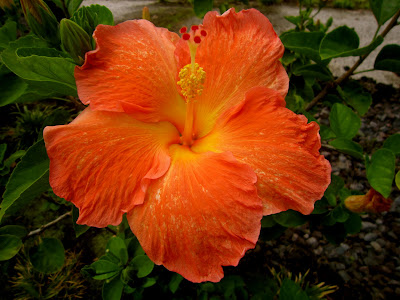 So I guess my plan for these next few blogs is to not write too too much; although, that probably won't happen. If you want more of my story, let me know... maybe I'll let you buy me fro-yo and we can talk. This first blog is more about my experience and less about the Ironman itself; i.e. what do you do in Kona as a non-participant/reporter/roommate to racers?

I got picked up by D at the airport Tuesday afternoon (Maggs was napping) and within minutes it felt like D was a sister... no not because we were fighting! We got along just fine :) It seems the rest of that day revolved around food somehow... taco stop for D, Thai food for dinner with the girls (Maggs, D, and Laura), Costco run, grocery shopping and snacking later on in the condo. By the way, D got the same veggie/chicken dish as me at Thai -- she does eat healthy despite what she says.

I was pretty stoked on my roommates for the week, not to mention our condo... I'd stay there again in a heartbeat (Wyndham something at mile marker 1.5 on Ali'i). Did I mention the spa has a sandy bottom and is enclosed by rocks, waterfalls & plants... very nice. And there are barbecues scattered all over. 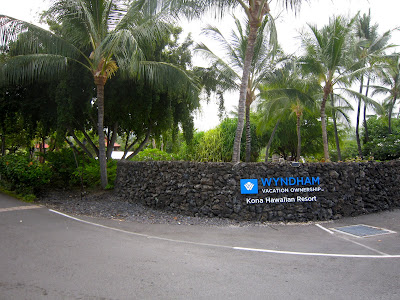 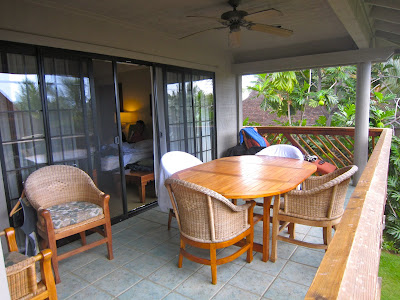 Unloading the groceries. Their Costco and Thai restaurants have really good things we don't get in California, no fair. 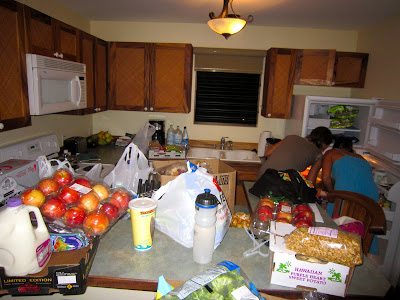 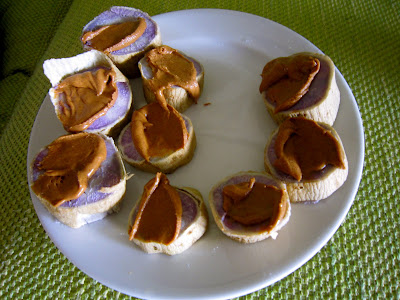 Wednesday at 6:30 a.m. I began work with Triathlete.com. This was completely new territory for me, and I was frankly a little nervous. I didn't know any of the crew except via email, I've never done real on-camera work, plus I really had no idea what my job was even going to be. Turns out my job was to walk around Dig Me Beach with the microphone interviewing everyone from pros and "legends of the sport" to age groupers, sherpas, etc. That was the gig for several days. It was fun and definitely something I'd like to do more of, but in the meantime I need to work on my comfort level behind the camera. I felt very awkward at times.

On the beach doin my thing (photo by Brian Hayes Patterson). 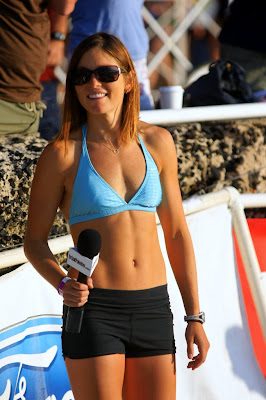 One of my many interviewees. I was asking if his handlebar mustache was aero (photo by Brian Hayes Patterson). 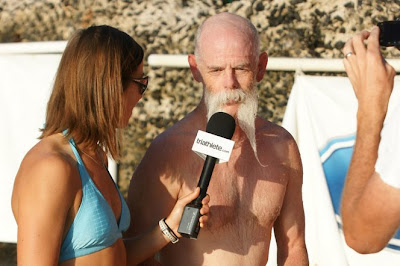 My favorite part of the camera work I did was at the expo -- interviewing all the reps of the major bike companies and talking about their top bikes. We had more fun talking off-camera than doing the interviews. I learned a lot of good stuff and I'm now debating what tri bike I want next; thought I knew but now I'm not so sure. They're all so rad.


Talking with Murray from Cannondale about Mirinda's bike; the change to 650s was key to her success in my opinion from talking to her about it, and Murray! 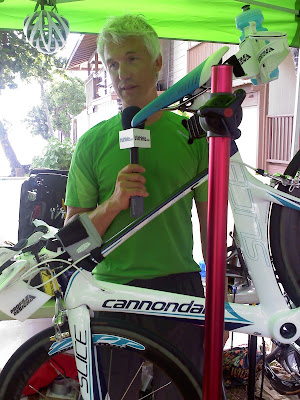 While out and about, I was told by my Zoot friends to stop by Bike Works and check out a couple things in the store. Uh, embarrassing!!... 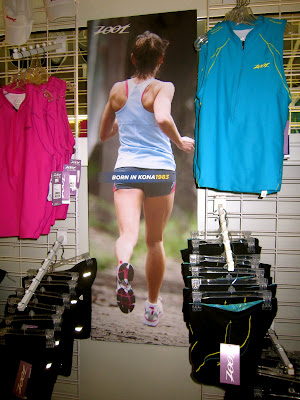 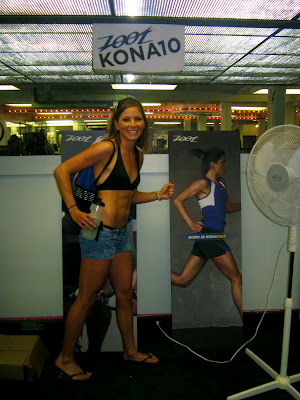 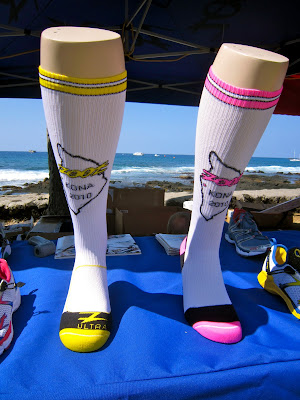 Moving on. I got in my first run on Wednesday... I love running down Ali'i, south and away from town because I hate being that person who goes by Lava Java 85 times a day -- oh, they're out there. They just do LJ laps, I swear. Within 5 minutes of my run I felt that crazy ass pain caused by Hawaii's heat & humidity, passed Chrissie on the bike and she looked solid. Like a machine. I ran 6 miles and was done. D was smart for doing her runs at 5:30 a.m., but then again I do like to torture myself so it's all good.

Wednesday at sunset I had a mellow swim planned at Turtle Bay. The plan was, of course, to see some sea turtles. But it wasn't our day... all we saw was a squishy sea cucumber. Oh, and I got a nice gash on my toe from the coral. First of many wounds to come! After the swim I did a quick shower/change and headed to a Kswiss dinner. I was sort of the oddball out, but the food and wine was damn good, the group was beyond friendly and by the end of the night I was playing doubles pool with some of Kswiss' hot athletes and company peeps.

Later on we headed over to Lulu's. Ahhh Lulu's... where everyone who's NOT racing goes and parties every night before/during/after the race. Always a good crowd. I ran into lots of folks who I've met in the last year or so. Think I stayed until closing. The next day, Maggs said that would be the last time I was allowed to stumble in so late until after the race; curfew was set to 9 p.m. Oops. Totally understandable, and I actually felt really bad. I can't even imagine the stress they were under leading up to race day, and the last thing they needed was an annoying roommate. At least I wasn't belligerent. I swear :) As a side note, Maggs was the most chill person I've ever seen going into a huge race. I learned a lot from observing her and the dynamics in our condo. 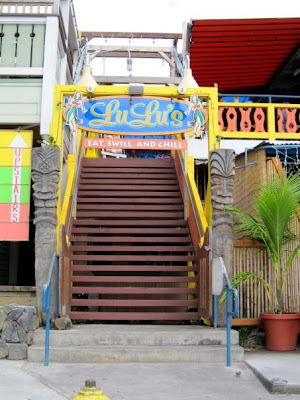 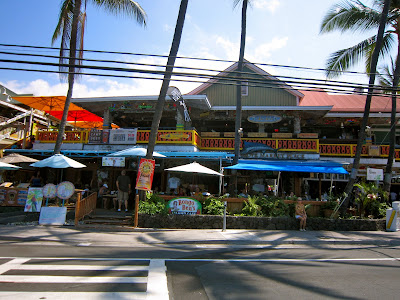 Thursday after Dig Me Beach, it was time for the Underpants Run!!! Funnn!!! I was managing the mic for Triathlete.com and trying to be on camera, all while trying to run with friends I saw and take my own pictures. Stressful! At some point I lost my camera guy, John. Oh well. I found Bree Wee and she captured this precious moment.... 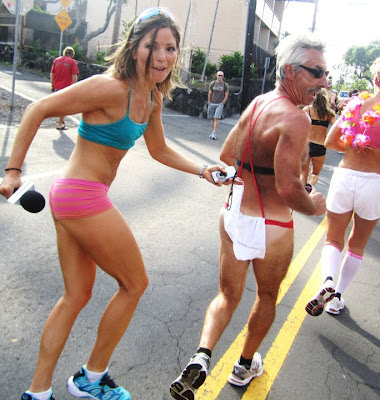 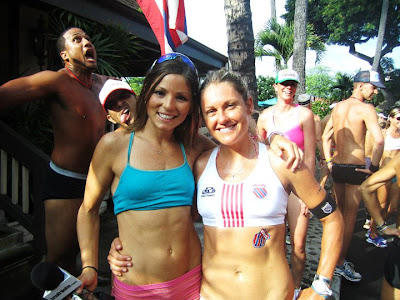 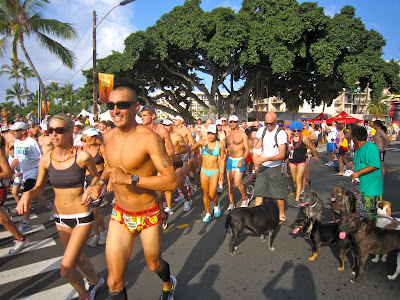 Can you guess who this is? 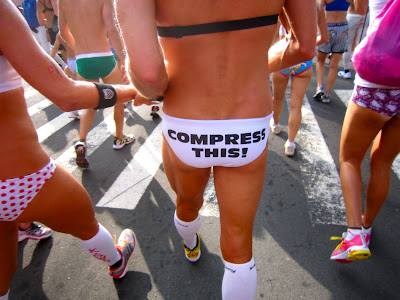 After that if was off to Huggo's with the Triathlete peeps again. I think that was the day I had a good convo with Matt Dixon, which was like talking to a celebrity in my world -- I'd like to say my coaching style is similar to his, so it was awesome to pick his brain. Super nice guy. Huggo's was where Triathlete did a lot of filming, and it was fun to hang/work their every day because someone cool was always stopping by for their shows, "Breakfast with Bob" (Bob Babbit) and "Tri Center." Plus there was good coffee and fresh fruit :) 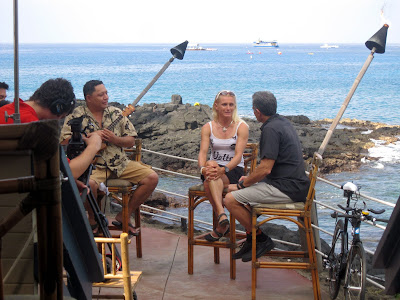 Terenzo's helmet. It's official, we now live in a Twitter-obsessed world... 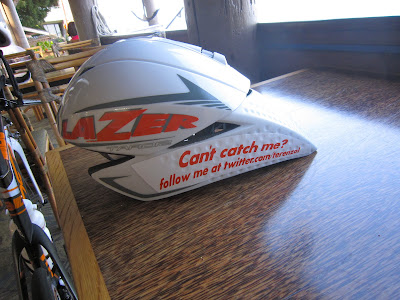 I don't remember what I did Thursday afternoon, probably hung out with the girls. D & Maggs were quickly becoming my favorite people in the world; unfortunately Laura wasn't around as much so I didn't get to know her as well. (She's in love, does the long-distance thing and BF was in town so totally acceptable, haha.) That night was another amazing dinner overlooking the beach at one of the nice resorts. At that point I could predict my future -- rich meals and daily desserts were the name of the game. No complaints! (Although, now that I'm home I can see the indulgence has caught up to me when I button my pants... ouch.)

Friday. Pre-race day. Got in a solid swim the race course that morning (not not a full 2.4, probably only half the course). I was just stoked I didn't get stung by a jellyfish -- this year, unfortunately, Maggs was the victim in that case. 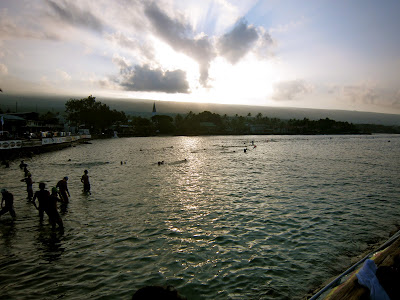 At some point D & Maggs discovered we had access to beach cruisers via our condo, so that helped walking back and forth for miles each day. We had fun cruisin. 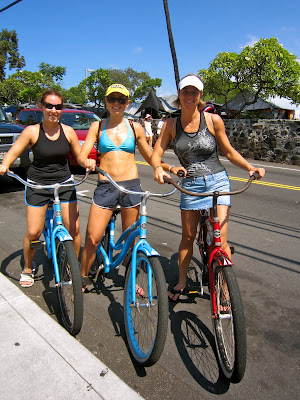 Around town, things were starting to get surreal, just as I remember from last year.... It's more quiet (or is it quieter?) and tension is in the air. Workers do the final touches on race course setup, athletes check in bikes/gear and way fewer people are out running/biking/swimming. By Friday I had run into nearly everyone I knew who'd be racing (Beth, Tatiana, Caroline, Jen Chalmers, etc, etc, etc), and everyone looked solid. I was slightly jealous of them, but not jealous at the same time. Hard to explain.

I hung out at bike check in for quite a while... found out my good buddy from GU, Tyler, is also doing IM Canada next year. Yay! I love that guy, and it will be fun to do our first Ironmans together. 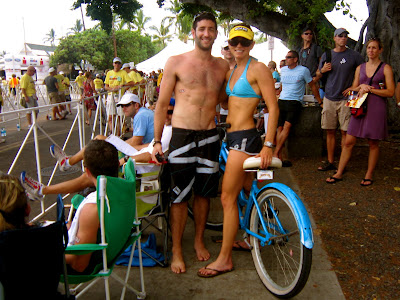 Maggs checkin in with the rest of them... 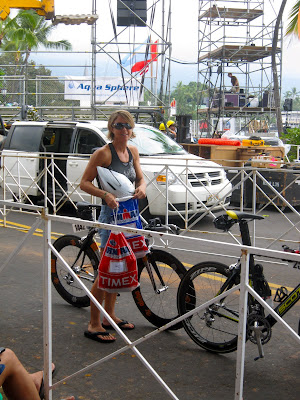