Anyone who was in Kona most likely heard the phrase and/or saw stickers: "I love cake." It's a total inside joke that not too many know the real meaning behind (hee hee), but on race day there were funny signs posted all around alluding to the cake thing :) 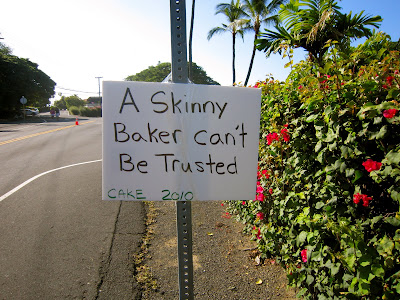 Anyways, I personally think writing about Kona is starting to get a little outdated at this point, but I want to at least talk about race day. Maybe just a picture recap for everything after that. Hm. What do you guys think? Over it?

Pre-race evening
Friday after bike check-in Kona turns into a ghost town. No more compression and SpiderTech in every direction, no more sounds of shifting bike gears, no neon-clad tri geeks roaming around.

I hung out at the condo with the girls as they prepared pre-race meals; I had dinner plans out in town later on so wasn't eating with them. It was interesting to observe how they were handling the reality that Ironman was only hours away. Maggs, as I mentioned, was a chill as can be. Not cocky, but clearly able to handle the stress/pressure very well. I was taking mental notes because I need to be more like her before a race. Laura was a little more high-strung, understandably considering is was her first IM, but her dad and BF were taking good care of her food prep and anything she needed so that helped. D was, well, D. I was still around by the time they ate so my appetizer was a beer a la Maggs (actually, she offered me a beer because she was having one too... awesome). 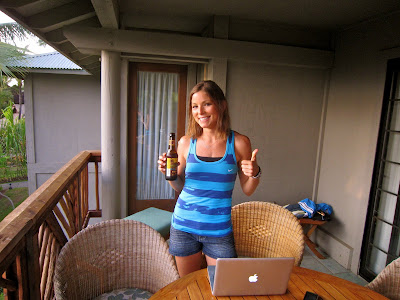 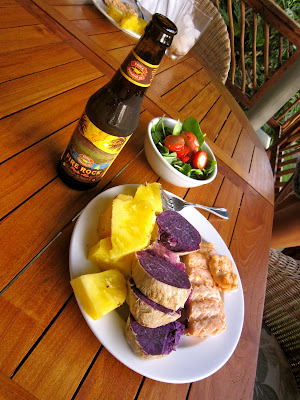 I left shortly after with a couple people, keeping my curfew in mind. That night I met photographer Larry Rosa who quickly became my new BFF :) What a guy. We had a lot of good laughs at what's probably the best Thai restaurant in Kona... can't recall the name, sorry. After Thai, I requested Orange Tree fro-yo on Palani. I'd heard about this place, and it lived up to its reputation. Self-serve meant lots of test tastes before committing to final flavors. 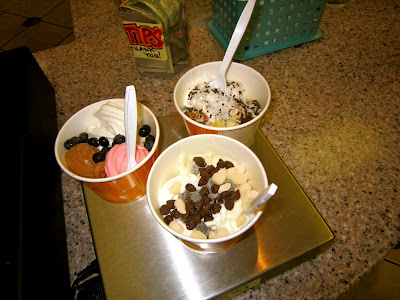 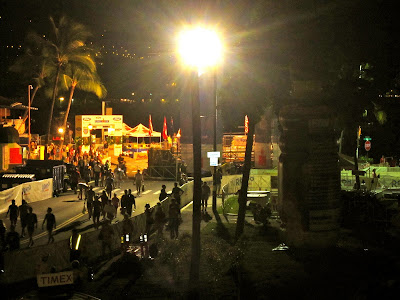 I found D, who'd be my partner in crime for the day. That media shirt I'm wearing didn't last for long, for various reasons ;) 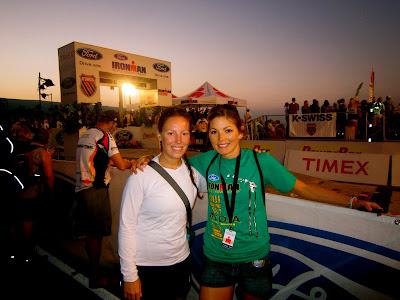 We headed down to transition and took it all in. My breakfast was PowerBar Oatmeal Ball things and media-room coffee :/ I watched body-marking a bit. I love seeing the intense, focused faces of the athletes. It's sort of "oh shit" combined with "let's get 'er done!" 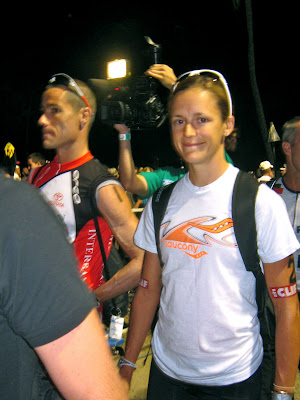 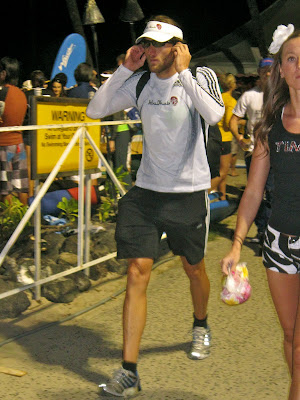 When they announced Chrissie wasn't racing, I thought it was a joke. It obviously wasn't. I thought of Mirinda and Julie and how their hearts probably skipped 20 beats with that news, perhaps some of the guys felt the same way -- less chance of getting chicked. I know a guy two who's been called out on that issue, rough ;)

For the swim start we were on the sea wall. Wtf media pass?! Definitely not as cool as being on the pier last year. Speaking of that, the whole media credential thing was very different than it was even just last year, but that's a whole other story.
(No need for swim start picture because you've seen it... that goes for a lot of my race pictures, which are very blah...)

After the swim, D and I visited Triathlete.com "headquarters" for a while for work-related things. Then to Palani with Starbucks to watch everyone pass on the bikes, then to the condo for re-fueling, etc. Not gonna lie, I did a load of laundry at the condo! Ha! Give me a break, I packed light with only carry on :)

We beach-cruisered back to town and posted up at the Hot Corner foreva. Hint: That's a good spot to catch lots of action. I was lucky enough to hang out with my friend Roman Mica, of EverymanTri.com. I've written for Roman's website for a couple years, but Kona was the first time we met in person. 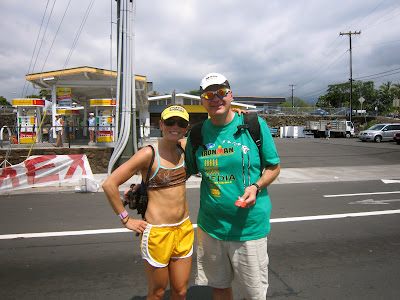 Btw, when we were cruisin over, we rode with Bree Wee's supprt crew/family... D & I recognized her sister right away thanks to blog world. This is hubs and the new kiddo... 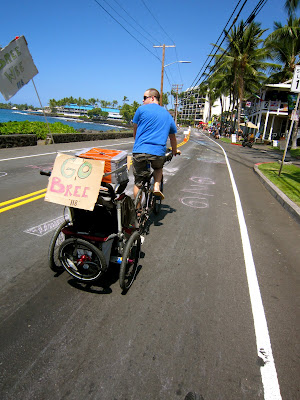 I also got to see superstar commentator Matt Lieto doing his IronmanLive gig as his bro was still in the lead. That was fun. It's a good thing Matt sported the compression for all the working out he was doing, looks tough ;) But in all seriousness, I really wish things had worked out differently for Chris Lieto. 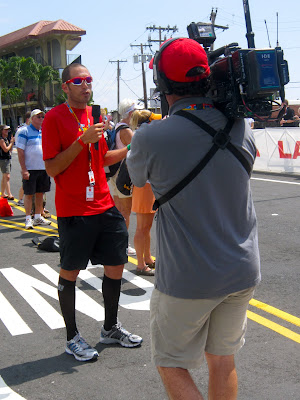 D & I witnessed this little girl get a big hug and kiss from her daddy, who was headed out on the run. I've never seen such a precious smile as this... 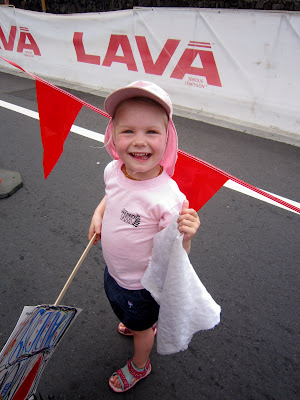 Also ran into some hot ladies from San Diego during the day... talk about great sherpas! 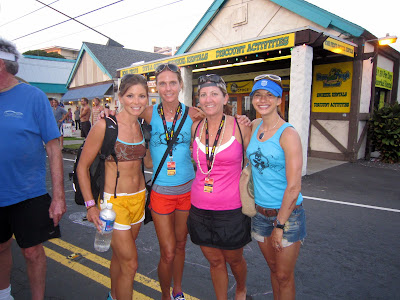 So race continued on... I was dehydrated as can be despite chugging giant water bottles. I headed down to catch the pro finish. D stuck back because she is the ultimate sherpa and was watching out for all our peeps. The finish was fabulous to see live, unlike anything in the world; although, this year didn't evoke tears as last year's did... Mirinda's 1st/sub-9 was the biggest highlight for me, and I'm happy for Caroline Steffan but was hopin Julie Dibens would snag 2nd. Of course, before the women, Macca and Raelert's run at the end was pretty damn good too, and watching the top guys trickle in is rad. I ran into Luke McKenzie and we chatted a bit. I super felt bad for him because you could tell he wanted to be racing, but he still had such a great attitude about his situation. 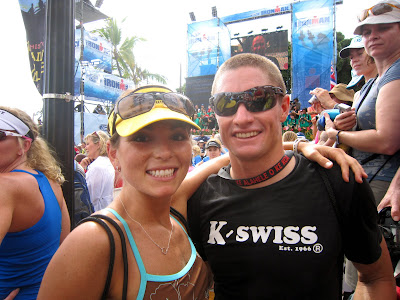 Some of my fav pics from the finish... 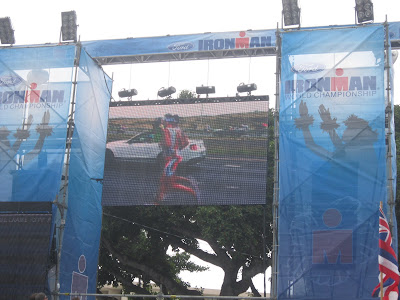 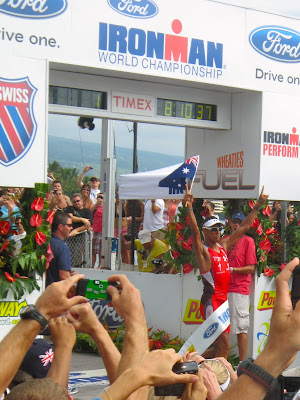 Crowie gets love from Lucy 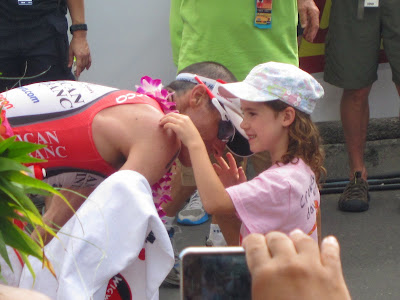 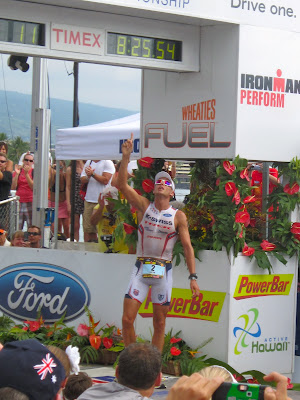 Ben Hoffman... in case anyone was wondering, he is such an awesome dude! 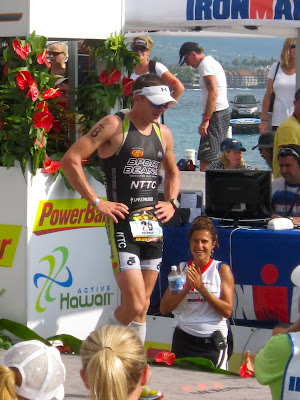 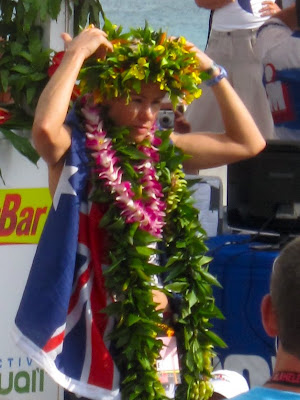 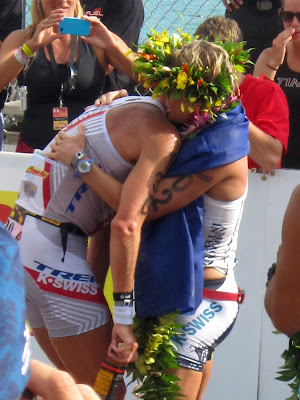 Probably my favorite thing at the finish line was rocking out on the ledge I was standing on -- so much energy, I couldn't help it! What made that even better was looking over and seeing Larry Rosa also rocking out. We made eye contact and had a good laugh... 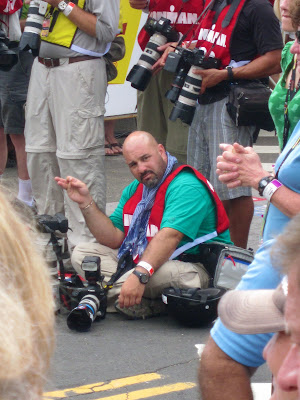 I'm not gonna lie. I didn't stick around for the midnight finish. A couple things came up, and I hung out with an interesting crowd that evening instead. At my little dealio, we all were sharing stories on the race, and it hit me that Kona 2010 was over. Already.

Time was FLYING by... at that point I didn't want my Hawaiian vacation to end. There were plenty of post-race events to make a flight change well worth the cost. Executive decision: Extend the trip! Smart move....
Posted by Tawnee Prazak, M.S., CSCS at 7:12 AM