A Talk with Chrissie

One of the things I love most about journalism is the randomness. For the most part, you're always researching and writing about something fresh, and you're talking to an array of fascinating (or sometimes not so fascinating) people. It's never "the same ol' routine" -- and that's just how I like to do life.

Last week I was trying to get in touch with Chrissie Wellington for an article I'm working on for 3/GO. I figured I'd not hear back at all or I'd have to talk through her manager via an email interview (neither are my ideal choices for any article). With someone of her caliber and being that Kona is right around the corner, you can't expect much, I get it.

Funny how things work out...

Last Thursday I had to teach a noon fitness class at my gym. I was having a blah morning, but the group of folks who showed up to class got me out of my funk. It's always fun times teaching our classes. After class I was planning a run of ??? miles... I was just going to go with the flow based on how I felt. Well I got going and immediately felt like poop on a stick. I turned around at about .65 miles in! Weak sauce! But some days you just don't have anything, and I wasn't going to fight that. No reason to right now in the year.

I got back into the gym and went to grab my purse (I mean, Trader Joe's bag). I was feeling a little self-defeated after the crap run, even if I didn't need the miles or anything. I just don't like "failing" at a workout, and running only 1.35ish miles at a sloooooow pace is a fail for me.

Just then my phone started ringing, and it was a number I didn't recognize. Often times, I won't answer random numbers, but for some reason, this time I just said, "whatever" and answered. "Hello?"

A woman with a British accent answers, saying, "Hi there, this is Chrissie Wellington."

Totally unexpected, and I was totally unprepared. Being that I was at the gym, I had ZERO resources to conduct a decent interview. I asked Chrissie if I could call her back very soon so I could rush home, but she said it had to be now because she had to go out and train again (in my mind, that meant either figure out how to interview her now or possibly never get a hold of her again before my deadline this week). So I started scrambling to find a piece of paper and writing device while making crazy small talk. Markers and the white board crossed my mind for a sec, but then I found an old piece of red construction paper with workouts typed on it, found a pen and started winging the interview in a small, dark side office in the gym (no time to find the light switch).

Thankfully I had been pre-planning some questions in my head so I had some rhyme and reason as to what to ask. But as with most interviews, no matter where I do them, I like to let the conversation dictate the Qs I ask, which ended up being the case with CW. She was enjoyable to talk with and is clearly good at being the interviewee. My notes are a little more sucky compared to how I normally record interviews, and apparently I also "destroyed" a very valuable workout chart (the red construction paper) that the guys use. Ooops! But I had a good laugh about it with Mike after the matter because he had seen me over his shoulder scrambling to get to business.

That's journalism for ya! Never the same ol' routine -- a theme that I feel is a good way to approach life, both in a career and in training. Keep it interesting, always find new stimulation and never settle for the same ol' cookie-cutter agenda. It's amazing how that way of life allows you to be your best and give the best of what you have to those around you.

~~~
Pictured below are my shorthand notes from the interview (after that I rushed home to fill in the holes while her words were still fresh in my head, now that's journalism skillzzz lol).... 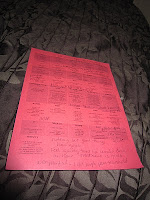 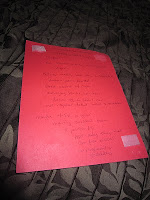 Btw, after talking with CW about her pain threshold, I have no doubt that her battle wounds from her recent crash won't even phase her at Kona. One. Tough. Chick. (Duh, right?)