Whew, what a stretch of days it's been! More fun than I can express, but demanding! It started with my trip to San Diego for a two-day modeling gig with H2O Audio and John Segesta. What a blast. I forgot how much I love modeling. 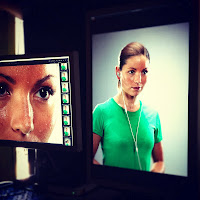 Day one I was rarin' to go after a roll-outta-bed trainer session. On the road by 7AM. The shoot was in studio, and my first shot was a doozy -- I had to stand there literally getting drenched with cold water straight out of a hose while holding my "Zoolander" face ;) Ha! The day wrapped semi early and I was able to fit in a swim and run in Encintitas, where I stayed the night. The YMCA there is super nice, and since it was my first time it was free. Score! Followed that up with a run along the coast, dinner from Whole Foods, sunset at Moonlight Beach. Perfect evening. 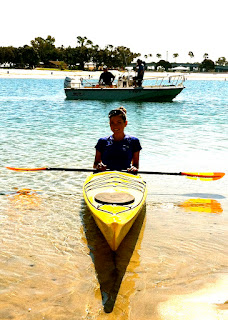 Day two (Friday) was on location and started bright and early with a run shot at Sunset Cliffs. I have a whole new appreciation for magazine cover shots of runners -- there is a lot that goes into getting "the perfect" shot, and I swear I ran 2+ miles in a small little radius before we were totally satisfied. Followed that up with kayaking in Mission Bay and swimming at the Boy & Girls Club Solana Beach. Got my triathlon in ;) Annnnd 8 or 10 hours later on Friday it was a wrap. Can't wait to see the finished shots... it was so fun working with H2O Audio and all the folks involved. Love the products I got to test out in the shoot, too!

Half-Mary Race Report. Fast forward and the next thing I know I'm on a plane to San Francisco to do a butt-crack-of-dawn half-marathon on Sunday. Why? Who knows. At this point my leg with the sting was getting better, but I was not 100% at all. The trauma of the sting, benadryl illness, etc, had taken a toll, and  I wasn't able to get in adequate rest time to snap back.

But I was NOT going to give up on the run. I knew I wouldn't do further harm, and I'm not one to throw in the towel so easily. 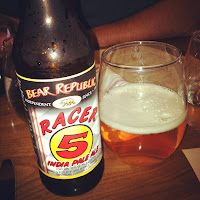 That said, I must have been on a major adrenaline high because as soon as we got to SF I just wanted to play and explore! We had a jam-packed afternoon -- complete with a couple good beers and a delish risotto -- and got to bed wayyy too late considering the 4AM alarm time on our phones.


Race morning. Dark. Cold. For once, it was so early that I had no appetite to eat and I also didn't want to over-eat right before a hard run. I got down some GF cereal and almond milk though. OK, so how this race worked: There are two half-marathons and one marathon. The first half starts at 5:30 AM with the full and you do 13.1 together, it's a point-to-point race that is quite hilly and difficult and congested with runners; definitely harder than the second half. The second half runs with, you guessed it, the second half of the full. But our race, the first half is something! Just the fact that you're starting in pitch dark -- and that's how it is for at least 5-6 miles -- makes it tough! But it's worth it. The hills are a great challenge, and you get to do an out-and-back on the Golden Gate Bridge. I mean, who gets to run on the bridge like that?! So cool! Especially considering it was my first time ever seeing the bridge!

Before the race I decided I couldn't get hung up on a PR on this course and with the week I'd had. So I just decided to run hard and see what happened. I enjoyed it more that way, but don't get me wrong, I still made myself suffer -- average HR overall was 167. The first 5 miles were mostly flat, but not easy -- it was hard to find a rhythm with all the people and all the passing that had to be done in a narrow area. I was pleased with my pace though, of 7:18-7:35ish. By mile 6 the real hill climbing began, and that was my only mile that wasn't sub-8. The hill was no joke.

Then onto the Golden Gate Bridge, which was caked in fog, cold and wet. You couldn't even see the most the bridge while approaching it. I was wearing a sleeveless top, shorts, arms warmers, my new PxRx visor and I got super chilly in the wind, heavy mist, etc. Motivation to run faster ;) At the same time, I was saying to myself how lucky I feel thanks to sport and the places it takes me. No complaints.

Take that back... My only complaint of the day: The aid stations were weak and sparse. There were 4 or 5 total, and the water cups had mere drops of water so it's safe to say I probably had less than 3oz to drink during the whole thing -- no bueno. In their defense, I guess when you have over 80k-90k (?) people running you have to manage your resources.

After the bridge there's relief in climbing with a really steep downhill at mile 10 -- my only sub-7 mile! But the downhill is deceivingly hard on the body. That mile is followed up with relentless uphills for the remainder of the race -- finishing uphill for 2+ miles HURTS! I was blowing up to some degree trying to hold onto my sub-8 pace, and I was also probably overly dehydrated AND bonking -- the cereal and one gel weren't enough in retrospect. But I didn't really care. I wasn't totally dying.

I didn't actually look at my watch for time until right before the finish, and it read 1:38. Ha! Definitely no PR (which is 1:36 btw). It was then a race to secure sub-1:40. Crossed in 1:39:01 with a HR of probably 185. The race finish, which is miles away from the start in Golden Gate Park, was quite uneventful. Most the runners who I'd been fighting for sharing space with had apparently been doing the full, and they veered off around mile 12-something, after which I was practically alone. It was also only about 7AM, cold and misty out so only about five spectators. Not even many finishers at that point either. All the smart people in SF were still tucked in bed! I waited for John, and didn't have to wait long! He was right after me... man, he's getting good.

I passed on the complimentary Irish coffee (yuck) and we took the shuttle back to the race start to quickly get back to the room to, ya know....... order breakfast in bed with Olympics on TV, and Compex on legs!!! ;)

I never really care about my placing in run races, but I was curious to see how I fared against other women here given the tough course. I think the steep hills were much worse than a race with the same elevation gain but gradual hills, ya know? So, was it just me who was slow or everyone? Everyone. Turns out the fastest time of the 4,000 females who ran was a 1:31, so that says something. My time of 1:39 got me 9th AG and top 20 overall. My actual run distance on the Garmin was 13.28 miles, so I did nail that sub-7:30 pace. (And oh yea, next time I'll do the second half -- starts later and is easier with less climbing. The top female times in that race were around 1:19-1:21.)

After the race we had a couple days to play in SF. I'm trying to branch out and travel a bit more when I can these days, and SF was at the top of the list. I can't even begin to tell you how much stuff we packed in while in town. Not to mention, lots of walking... probably 5-7 miles a day (including the day of the race). That's city livin for ya. Good times for sure! But it does feel soooo good to be back home....
Posted by Tawnee Prazak, M.S., CSCS at 9:11 AM