Speaking of Opening Up....

... A few weeks ago I was interviewed by my buddy Vinnie Tortorich. I really didn't know what he was going to ask or want he'd to talk about, but prior to our chat I had given him links to my blogs so he could decide. 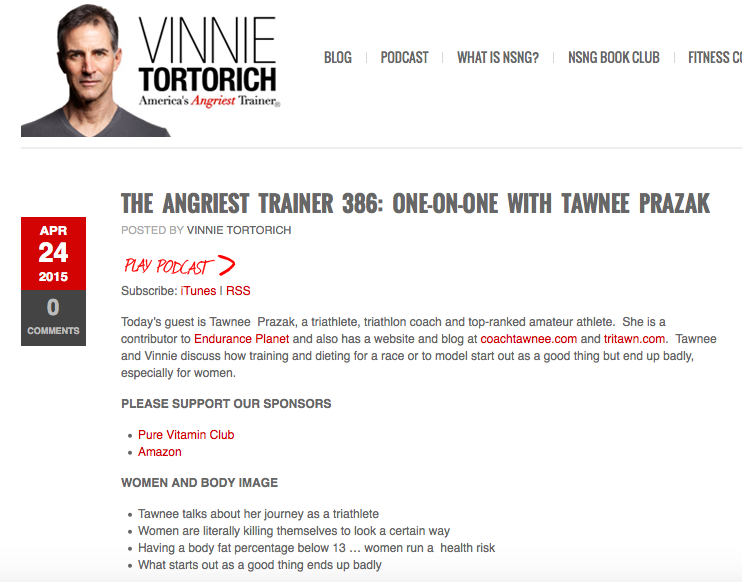 Turns out, Vinnie wanted to get real with me, and ask some "tough" questions. In fact, apparently one of his training clients had some beef with my facebook default photo of the Betty girls and I at the Kona Underpants Run--and how we were impossibly fit/too skinny. Hm... well I will only speak for myself and I know I was somewhat broken at that point (it was the UPR 2013). That said, I know the gals in that photo, and I don't think they're the ones I'd pinpoint as unhealthy endurance athletes--I mean it; I think those gals are pretty solid! But I see the point and how it could appear that way. Whether it's the Kona UPR or athletes racing Ironman or whatever situation in endurance sport and/or female athletes there's no doubt issues are rampant, as I've been discussing more and more...

Anyway, I thoroughly enjoyed my time on Vinnie's podcast. Partly because I respect Vinnie and he makes the conversation go so easily (he truly gets the art of interviewing); and partly because it was a chance for me to start opening up about some personal things in my life on a bigger platform for thousands to hear--and I was not afraid! That felt good.


Here's the link to the show. Give it a listen. It's also on iTunes for free under Vinnie's podcast. Thanks!