Well I'm back at it: 10+ hr work days, no sleep, lots of caffeine, extreme multitasking, etc. Yup, I'm working at a newspaper. Temporarily at least. I started this blog after I resigned from my newspaper job, so I've never really talked about how absolutely crazy and hectic it is to work at a place where deadlines rule your life. It doesn't matter if you have a Tuesday night workout planned, if you have work to do before Wednesday deadline, then suck it up. (You can probably see why I decided to change careers...)

But it wasn't all bad. I loved my coworkers, the stories I wrote and where the job was located--we put out three small, local weeklies for the cities of San Clemente (SC Times), Dana Point (DP Times) and San Juan Capistrano (The Capistrano Dispatch). My favorite part about journalism is that there's always something new going on. New stories, fresh topics, etc. I learned about everything from running an organic farm to synchronized swimming to city politics to dory-boat racing, meeting some fabulous people along the way.


Here's a pic of the paper featuring one of my cover stories that was on a dude who swam the Catalina Channel. Amazing stuff. 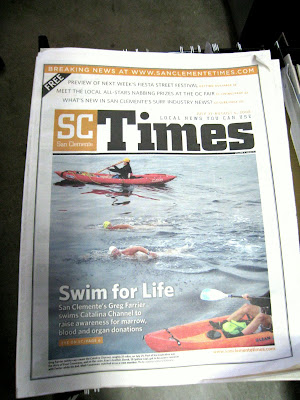 And, just for fun, for those unfamiliar with dory boat racing, here's a glimpse at the guys in action. Usually there's around 10 or so of these boats in a race, and it gets intense! In fact, this weekend, they'll be at it in the annual Ocean Festival. 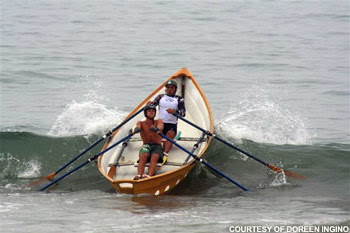 Anyways, I still do freelance for Picket Fence Media and am in close contact with the staff. Recently, my former boss, Norb Garrett, asked me to come in and be the Editor while he went out of town (I was honored!), as well as house-sit for him--sweet! Not an easy job at all (the editor gig, house-sitting is more than pleasurable), but I was up for the challenge. So, since last week I've been back in the mix down in San Clemente. I haven't even had time to think about Vineman until today. And literally hours after the race, it will be straight back into work mode. But it's worth it...

Since being back, two things have particularly left an impression on me:

Last night, as tired as I was after already working nonstop all day, I attended a BBQ put on by a group of friends & teachers from San Clemente High School who will soon be participating in the Relay for Life, a 24-hour walk/run event that raises money for cancer. The group formed in honor of one of their fellow teachers, Jeff Spear, who passed away from non-smoking lung cancer last October. Oddly enough, I remember writing a story on Spear when he was initially diagnosed last year. It was sad to learn of his passing, but an honor spending time with these people last night, you could just feel the love (as lame as that may sound).

I almost started crying when talking to Spear's wife, Ruthie, who was the most optimistic, positive person. She's left with three small children and the memory of a husband and dad, but has the best attitude imaginable. She's trying to make the best of things, and is doing a damn good job and has a smile on her face. She just got back from taking the kids to Yosemite, cause "that was the next trip Dad wanted to do."

I learned that the team is also racing for other loved ones who had cancer--some survived, some didn't. For some team members, it was the impact that Jeff Spear had on their lives that led them onto the team, like the mother of Taylor Martin. Taylor is suffering from a rare disease and had Spear as a teacher. Taylor's mom told me of the bond that Spear and Taylor formed. Talk about getting teary-eyed!

As I left the BBQ last night, I realized how easy I have it. Seeing the hardships that others have endured makes you appreciate your health and that of your loved ones. I may get frustrated with things in my life, but I have no reason to complain.

I'll be writing the cover story on Team InSPEARation for next week's issue. It will be a scramble to get it done with Vineman 70.3 taking priority as of now, but I'm honored to do it.

This isn't such a grab-the-kleenex topic. I went swimming at my old stomping grounds (Ole Hanson Beach Club) during my lunch break Monday and it turned out to be reunion time/social hour. I ran into a good friend, Ernie Polte, who's 82. (Picture by me!) 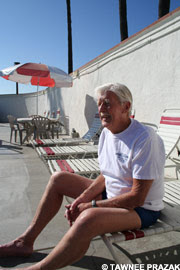 I wrote a story on Ernie when he was 80 simply because this guy's life is gnarly. He has been swimming every single day of his life for as long as he can remember. Literally hasn't missed a day. He's been in countless swimming races--long-distance ocean races, swim meets, you name it--and he says he's podiumed in all of them. Broke records back in the day and all. He was also a successful swim/water polo coach forever, and he inspired me to start the 6 a.m. swim class I've been in for the last year because the guy who coaches it, Byron Reidenbaugh, was one of his students. Ernie is simply amazing and I was so glad to reconnect with him--and see that he's still in the pool! He gave me the best compliment, telling me that my swimming has improved by leaps and bounds since the last time he saw me. I was looking back on the story that I wrote on Ernie and noticed a major mistake (in my eyes at least). I said he did the Escape from Alcatraz, but it should have been Alcatraz Invitational Swim. Unacceptable!!!

Anyways, this is the Ole Hanson pool (from san-clemente.org): 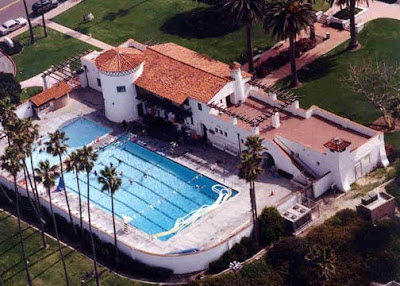 It's beautful and very popluar at noon.... probably why I ran into so many people I know, even coach Byron! He tried to get me to swim in the fastest lane, no thanks! With all the time spent talking with friends, lap count suffered a tad. But whatever, I'm tapering.

Ole Hanson's is overlooking the beach, so after the swim, I threw on my Newton's and went for a 30-min run on the SC Beach Trail. It was absolutely gorgeous out and literally made me want to move to San Clemente right then and there. Just something about that place.

Here's a glimpse of the beach trail by T Street from a photo I borrowed: 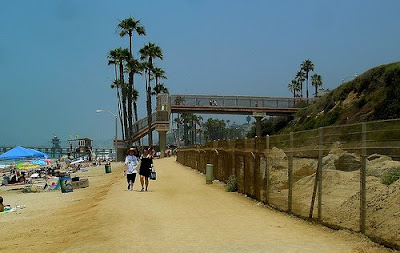 As for now, it's time to switch into race mode. I need to stop procrastinating and finish packing, ugh! But... I'm thankful that I'll have a couple new memories to think about and inspire me as I take on the Vineman course Sunday!

And if anyone is ever in San Clemente, be sure to pick up the SC Times.
Posted by Tawnee Prazak, M.S., CSCS at 1:20 PM