Since Vineman, Life is Good

After I did Calif 70.3 I got this post-race low, you might call it the equivalent of a coke head coming down from a major high. Nice analogy, I know. Point is, I didn't get that with Vineman because life has been nonstop since I crossed the finish line, and I love it! As soon as I got home I dove straight into work, house-sitting and enjoying life in San Clemente. I swear, why did my parents choose to live in Lake Forest and not a beach town? Not cool. As soon as I'm done getting my master's and can support myself, a beach it is!

Pic I took from my first post-Vman run along the SC Beach Trail last week: 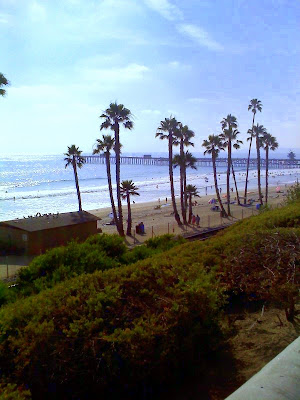 Another reason I didn't have post-race blues is that I had another race to look forward to right away--Pac Coast Sprint at Crystal Cove! (Although, come to think of it, I did the Newport Sprint just 2 weeks after IMCA, but whatever.)
In the case that disaster were to occur at Pac Coast I secretly was very happy to have an excuse that my body was still wrecked from Vineman. All I had to say was "half-ironman, 1 week ago. what." But, it's in my nature to push hard and give every race my all so I wasn't about to half-ass anything.
I was especially looking forward to the swim. The surf was huge leading up to Sunday, and I thought it'd be fun to get in a little pounding session. Being an on-again-off-again surfer for about 12-13 years, big waves weren't going to scare me away--I've been thrashed around in the surf more times than I care to admit! But, as it turned out, the lifeguards felt our lives were in too much danger with the pounding shore break and crazy rip currents churning up the sea (gasp!), so they axed the swim about 30 min before the race. Bummer dude. (Jealous of you Solana folks!)
So duathlon it was. This upset a lot of people, as this race was the Sprint National Championships and the sole qualifier for the Sprint Worlds in Australia this Sept. Personally, I didn't really care, I knew I didn't want to go to Australia, and this wasn't an A race.
The new race game plan was to sprint up to transition from where the swim would have started--that turned out to be .75 miles according to el Garmin-o, with on hell of an uphill from the sand to T1. See the elevation difference here (I'm standing in transition): 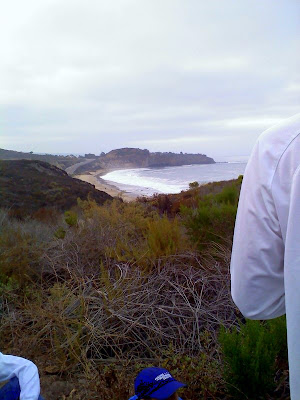 Being the smart racer I am, I decided to lounge around, chat and not move a muscle before my wave went off instead of warming up. So as soon as I started, I was in a major oxygen deficit and hurting. Practically wheezing. 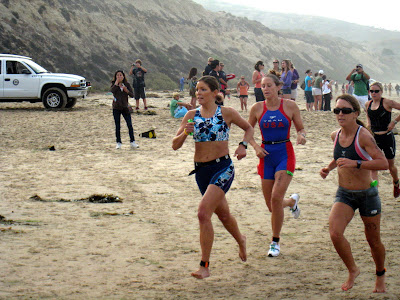 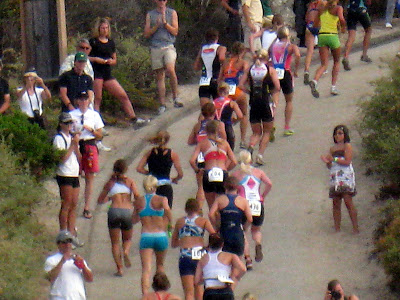 I got up to T1 in about 4 min, and headed out on the bike, which is a two-loop, hilly 12-mile course and lots of fun. I later heard there was tons a drafting going on, but thankfully I didn't get caught up in any of that hoopla. I prefer to do my own work. Once again, smart me: I forgot water or any nutrition, and I was pretty parched, but thankfully it was only a sprint. Still, just a gulp of liquid was on my mind the whole time.

Off the bike in 36 min and onto the run. Both my transition times were sub-1 min, so I was happy about that.

On the run, I felt better than I thought I would, plus I was in close competition with a lot of girls in my AG, as well as the 25-29ers. So I decided to push it hard and attempt to make some passes that I missed on the bike. Plan worked, and I passed and handful of girls by the end. The run takes you from PCH down down down to the sand (during which you pass the Beachcomber Restaurant, with insanely good smells coming from there--torture). After about a mile or so of sand running, you hit this MAJOR hill that a lot of people walk up. It's maybe a quarter-mile, steep as hell (steeper than the first hill that led us into T1), and I was running at a snail's pace giving it my all.

My 5k run ended up being just over 21 minutes, and I finished 3rd in my AG with a time of 1:03:xx. To be honest, I was surprised with my result. I didn't think I'd do that well. I mean, it wasn't a great performance, but it could have been worse considering the 70.3 soreness that still lingered. 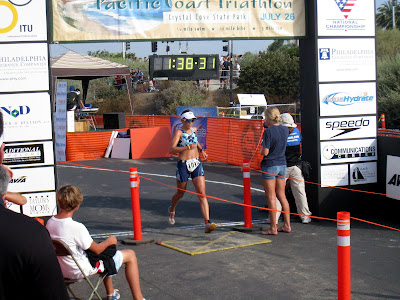 Chillin post-race with Brynn and Chris who also did Vineman last weekend! 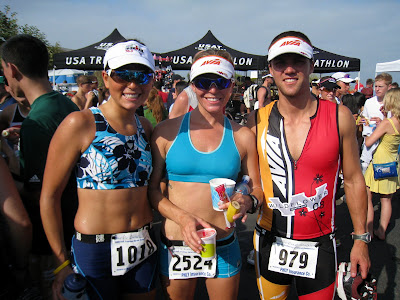 And hanging with my spectacular race sherpa of the day, Mr Ian Mikelson himself, who also did Vineman last weekend but wasn't gnarly enough to race again seven days later. Clearly, he was still suffering. It's OK Ian, we understand ;) 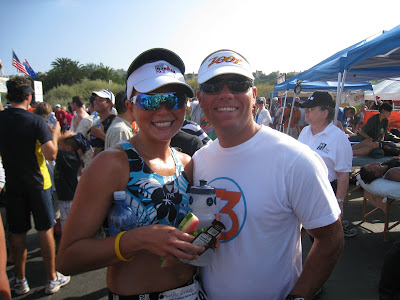 And then we get to awards. Don't you love it when no other winners in your AG show up and you're in 3rd place. How embarrassing! 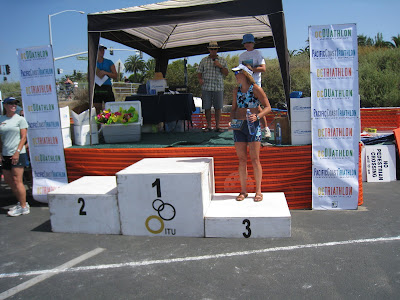 I always love being done with a race, even if it's just a sprint. Work's over, time to relax. However, more working out was still on my horizon. Ian was going to hang around in the area for the afternoon and do his long run (well, I guess he's legit after all) and I had the genius idea to join him for a portion of it! Silly me! At least I was smart and chose to meet up for the last 30 min of his 1:40 run. We got back to Lake Forest and he set off in the heat of the day, and damn does LF get HOT. Even just the 30 min I ran with him left me drained.

Thankfully, that was all the working out on the agenda. Too hot! Next up was refueling. We kinda skipped a "real" lunch and headed straight to frozen yogurt instead. Self-serve, with lots of sampling, of course. I'm proud to report that I outdid Ian by getting not only a bigger-sized cup, but a lot more of the good stuff in it. I'm a sucker for frozen yogurt!
In other good news, I'm house-sitting yet again for a different coworker in Capistrano Beach for the next two weeks and the newspaper wants to keep me on board for longer (I'm turning what was supposed to be a two-week gig into a summer-long-if-not-longer gig), which is great because I love my coworkers, writing and, of course, making extra cash! Speaking of cash, I just spent a whole bunch on more races: Santa Barbara Long Course Aug. 22 and the 2010 Ironman 70.3 California.
And last but not least, Monday I felt like a proud parent: My sister, Karlee, was heading out for a bike ride to Irvine Lake and back (30 miles) and I decided to tag along and make it a recovery ride. It was only her second time ever riding that far, and she did great, even shaved off 10 minutes from her first attempt at that ride! She looked very comfortable in aero bars and is a strong rider, especially with climbing. I can't wait until she's ready to do a triathlon (but I promised not to pressure her to do one just yet). 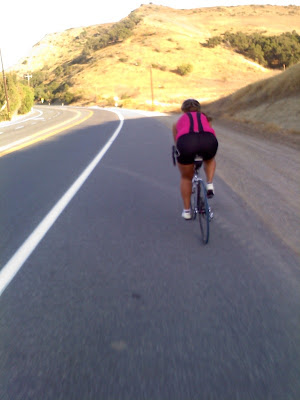 That's it. Next priority for me is constructing a Clearwater training plan, while also preparing for the three races I have before that!