I know I keep repeating the same thing, but yet again, it was another stellar weekend. Definitely one that I won't soon forget--escaping the OC to be part of a houseful of triathletes with a solid agenda: train, eat, lay around, sleep, repeat. I often hear about such weekends that go on down in San Diego at Charisa's, so I was stoked to get in on one for the first time, except this weekend we were up in the South Bay area at Ian's Casa. Of course, I didn't actually train with the guys--are you kidding me--keep up with Ian and Brian Scott, both Kona bound, and Kevin, who's doing IM Canada soon? Ha. But I planned my workouts to fit in with their schedule, so I got some quality time with them during the most vital moments of the weekend--eating and laying around all compressioned up. 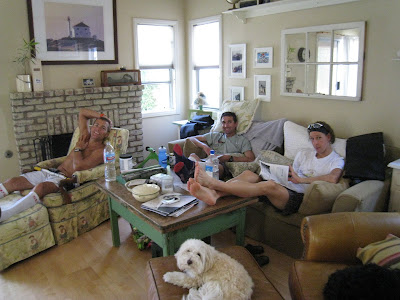 I got into town Friday to kick off the weekend with a long swim. We went to a very luxurious, spa-resort-like pool in the beautiful city of Hawthorne... well, not exactly... but there was a pool with three lanes for lap swimming open for two hours, which was good enough for us. It was a great way to get the big weekend rolling, and once the group was all settled in Friday night with enough gear to start our own triathlon store, it was off to bed.

On the schedule for Saturday: morning bike, break, then afternoon long run. After Ian, Brian and Kevin headed out for their 5-hr ride, I fueled up (with Delicious Strawberry oatmeal) and was just about to go when my front tire decided to flat. I took that as an omen to change my back tire completely, which was super old and worn down, not wanting to risk any problems while out in a new area all alone. So I changed everything--not to brag, but I did so flawlessly in PR time--and took off. I owe you some tubes, Ian!

The PV Loop was a gorgeous and fun ride with some good climbs. I was planning to ride for a couple hours, factoring in the potential of getting lost or stopping to enjoy the views--I didn't get lost, but there definitely was some breathtaking sights to stop and take in: 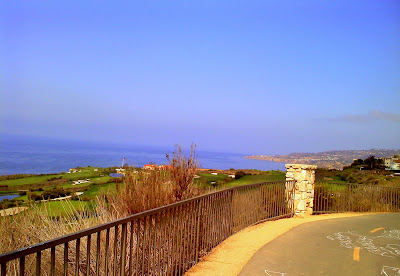 I kept riding even after completing one loop, and about 30+ miles later, I felt like I had lots more left in my legs, but knew that a gnarly run and huge ride awaited me, so I cut myself off and went back to Ian's to shower, eat lunch and get the relaxation started before the dudes got back.

I can't even express how entertaining it was for me to watch the guys come in from their rides and run over the weekend. They were filthy, smelly, sweaty and food-and-beverage-consumption machines, expressing a combination of exercise highs and exhaustion always with huge smiles and lots to talk about, but I also caught the occasional stare of delirium. It was classic.

Saturday afternoon, after getting in some quality couch time, we all headed down to the beach for the long run. I, B & K were running for 2:15; I was running for 1:30. I started off with them, and as soon as their pace got into the sub-7 range I backed off knowing I could never hold that pace for my planned 11-ish miles, let alone 4 miles.

From Redonodo to Manhattan, it was a zoo of drunken partiers, beach cruisers and the AVP Volleyball Tourney mayhem... Then us: Runners geeked out in tri attire head to toe (glad I'm not the only one who wears two watches, Brian!) weaving through the traffic.

I took a breather at my 5.5-mile turnaround at Manhattan Pier, and made it back in the planned 1:30, although the last few miles were pure torture. I recently made a switch to Zoot running shoes, which I totally love, but unfortunately the back tab thing rubbed my Achilles/heel area raw, leaving me all bloody and cringing in pain. I had no way of covering it (socks were too short) so I just endured the pain rather than giving up and walking.

I like that I'm only training for half-Ironman with a group of IM-training freaks because I got to enjoy a lot more of these types of moments while waiting for the boys (they ran 19+ miles!): 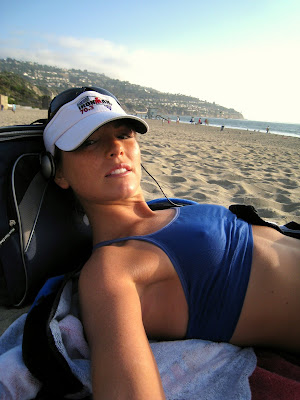 Saturday night was simply awesome. We cooked something like 7 pounds of chicken, 3 pounds of salmon, several Trader Joe's pizzas, corn on the cob, fruit, etc... and it all was effortlessly consumed. We had two others joined in on the fun, Ryan and Brynn, and we all sat around too late talking, eating and enjoying the company. Bed at 11 p.m. was way too late, but it was worth it hanging out with a fun group like this: 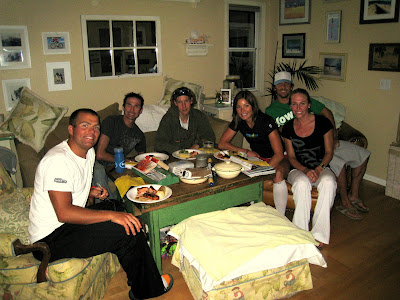 Sunday came to early, but one by one everyone geared up for the big day ahead. Boys: 7-hour ride. Girls: 70 miles (time? who knew). This was Brynn's first ride of that volume, and since we were both in unfamiliar territory it was just about getting it done. 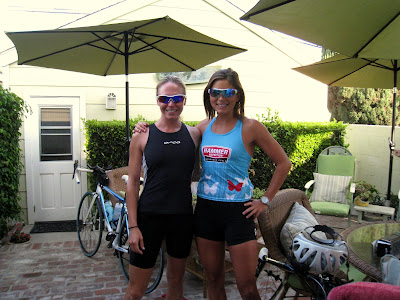 We were originally going to just ride north for an out-and-back, a mini version of the boys who made it up to freakin Oxnard, but we weren't liking that route and turned around just before Venice to go do the PV Loop. I felt surprisingly great the whole ride, pushed hard when the terrain allowed and was loving the fact that 70 miles isn't such a daunting task for me anymore, even on top of a hard training week leading up to it. Yea, I cursed any hill we came across toward the end, but I didn't feel completely wiped out. Plus, it was great having a partner along, too--nothing like some good girl talk when you're out on the road for hours. I wonder if boys talk about similar things as the girls? Hmmmm.

The boys rolled in with after riding nearly 140 miles, all raccoon-eyed and covered in LA nastiness. Those guys truly inspiried me this weekend--all their hard effort and still having enough left in the tank to be cheery and smiling and not just crawl into bed and go into a coma. Not to mention, they all said without question they'd be working out Monday too.

Being around these high-mileage triathletes clearly had a good effect on me too: This was the first weekend I've ever ridden 100+ miles and ran more than 10 miles within two days. And I felt pretty darn good through it all. Slowly but surely, making progress and enjoying the ride... 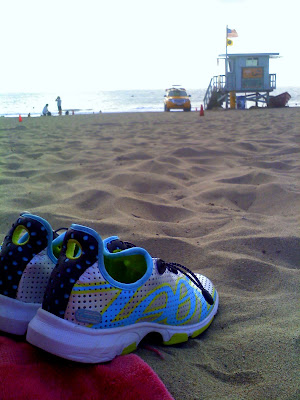