I've done 12 races since last November--that's a bunch for me!--and every one has given me an experience that I wouldn't trade for anything. The one thing I haven't done a lot of lately is sit back, relax and play sherpa. I love to be in the game, not on the sidelines. But a special opportunity has come my way, and I couldn't been happier to say that I'm backing out of the Mission Bay Sprint. I'm doing it to give my slot to a cool little dude named Calvin. It will be his first triathlon. 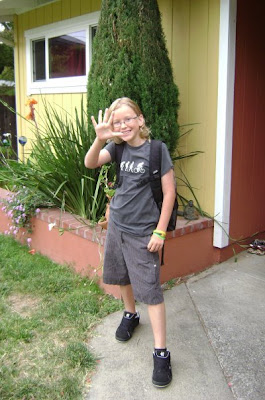 I met Calvin, 10, the night before Vineman 70.3. My dad works with his mom, and our families went out to dinner for my pre-race meal. Turns out Calvin's dad, Mike, was a major STUD triathlete back in the day and is still a stud in the endurance world. I took some pictures off his Facebook from his triathlon "glory days" to prove my point: 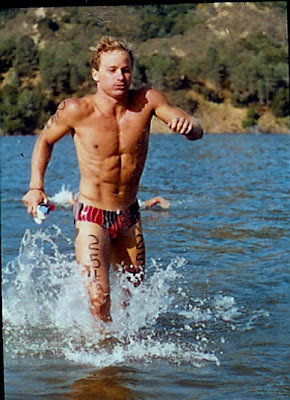 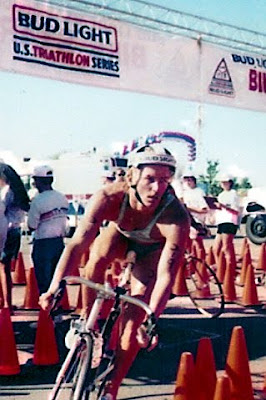 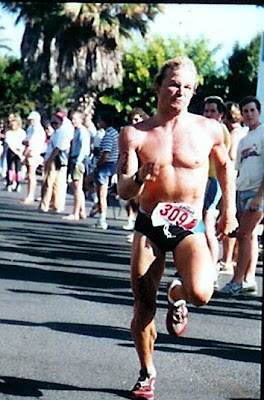 To this day, he's still killing it out there (you wouldn't believe some of this guy's stories!)... 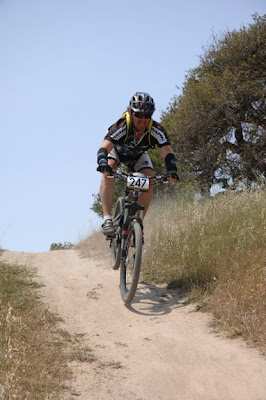 Mike, who's worked at Marin Bikes for years, is now lucky enough to have a son who he can bring along for early-morning runs, bike rides and swims. And it sounds like Calvin got the good genes for endurance sports--the day I met him he had just placed 2nd in his first-ever bike race. I hear he's also quite the runner, giving the older guys a run for their money. Already, Calvin's done some running races with his dad... 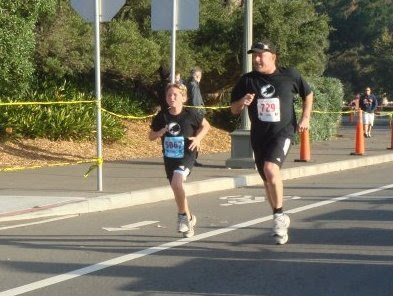 And he rocks on the bike just like Dad... 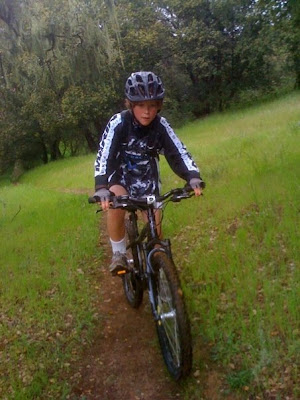 Well, after meeting Mike that night before Vineman, he apparently got the urge to do a triathlon again (hope I'm responsible for that!), but this time with the twist of having Calvin do one right alongside him! And you know how I feel about a family of triathletes--nothin' better! We talked, and Mission Bay seemed like the perfect opportunity.
Unfortunately, they waited a little too long to sign up and it sold out. Bummer.
Then I got to thinking... I don't need to do the race; I'd be a million times happier and satisfied watching someone enjoying the thrill of a triathlon for the first time. It was a no-brainer: I offered my spot to Calvin. That way, at least Mike could see his stud-in-training son do his first tri on a great course. At first they were hesitant to accept because they know how much I love to race, but I convinced them that I didn't want it any other way. Thankfully, Koz Enterprises allows you to transfer bib numbers and Calvin's just old enough by their rules to participate. Sweet!
The only problem: We still didn't have a spot for Mike. The search was on. And wouldn't you know--I found a spot from my SD girl, Giselle.
Giselle and I worked together at The Daily Aztec at SDSU and have since stayed in touch. She's been bitten by the endurance bug--I'm thinking her killer job at Active.com helped with that--but unfortunately a calf over-use injury is preventing her from racing at Mission Bay. She's wisely backing out of what would have been her first triathlon to get better enough to run in her second marathon in Las Vegas this December. Let's just say Giselle is the angel in this equation. When she gave me the good news that we could have her spot, I immediately contacted Mike and he was stoked to say the least.
So now the father-son duo are busy training their hearts out for the big day October 4. Here they are along with wife/mom Robyn, who's as sweet as they come: 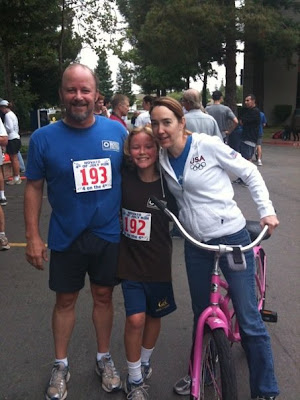 As for me, I don't know if I've ever been more excited for a race! Seriously. I get to be the cheerleader/sherpa/photographer for my dad (his first triathlon ever), my mom, Mike, Calvin, as well as our good family friends, Larry, who recently won his battle with throat cancer and is celebrating by doing his first triathlon, and Larry's sons, Scott and Keith, who are in their 20s and new to triathlon too.
Larry's story deserves its own blog post, partly because of his amazing cancer survival story and partly because he and my dad are best friends from their college days and are currently training together for MB, making for some great (funny) stories.
Posted by Tawnee Prazak, M.S., CSCS at 5:46 PM