I have to break down my Boise 70.3 adventure into two parts: 1) the actual race and 2) the trip in general. Blog numero uno is the race report, which unfortunately is the "bad news." Hm, maybe "not so good news" is less harsh. Either way, it was a tough day for me on a lot of levels.

But it's all good because the future Blog #2 will wrap up my story of this past weekend on a good note--i.e. the fact that going to Idaho with one of my best friends, Sara, was so incredibly fun and even with a 70.3 carried out as an aquabike, it still was one of the funnest trips ever. No regrets. Seriously.

Just look at this place: Pre-race
A 2 p.m. start sounds cool, and in the case of Boise, I definitely preferred it over a morning start given the frigid lake temps/cold mornings. However, I would rather start a race at 7 a.m. any day. Sitting around waiting to go is tough. Knowing how much/how little to eat before the race is tough too.

We left our house at 11:30 a.m., which ended up being way too late. We were late to drop off run gear at T2, which was closed by the time we got there. We begged the security guard to add our bags. He did: 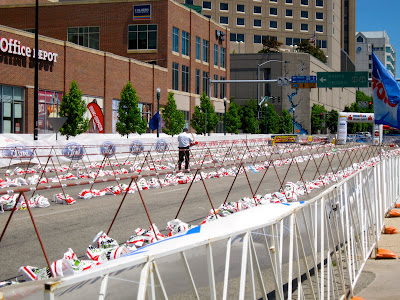 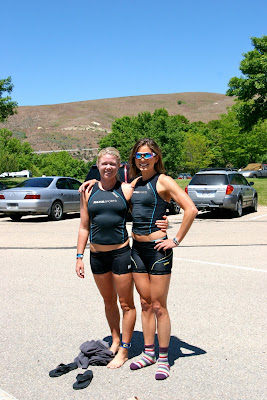 But wait. stress was a comin... we were late. I HATE being rushed before a race, and that's just what happened when we got to transition. I had non-stop prep to do that I didn't even finish before transition closed. I was shaking with anxiety, and literally blacked out to the rest of the world. (Sara and I were talking about it later, and I have no recollection of some of the things she said to me.) Thankfully, I calmed down a little bit before starting, as our wave was 30 min after the pros.

But while waiting, the sweating began. See how sunny it was: 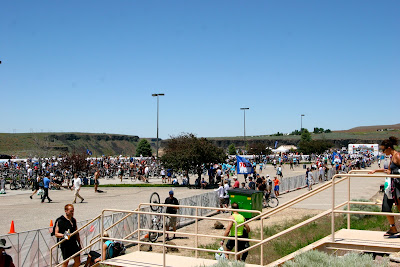 And crowded. Getting corralled down to the lake in sardine-like crowds: 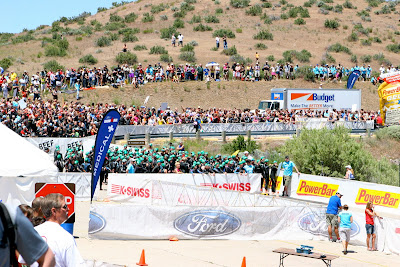 It was so hot standing in our wetsuits before the swim that I opted to not apply Bengay on my lower legs/feet, which I was planning to do given my tendency to cramp during cold swims. (Using Bengay to stimulate warmth was a tip I received from a good friend/athlete in SD.)

Swim
Finally into the water. Frigid. As soon as we got in, all heat left my body and I was immediately freezing. The lake water was apparently in the low- to mid-50s. Colder than the ocean. major uh-oh. The snow just recently melted off those mountains: 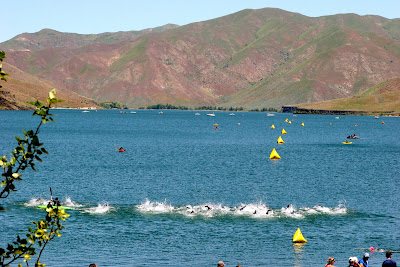 The swim was awful for me except for my sighting--I stayed pretty much on course the whole time. But I felt like crap. I had no "oomph" in my stroke. Maybe it was lack of taper, maybe it was the freezing water. Whatever it was, it was beyond demoralizing to feel so flat and blah. Then the leg issues came. I don't kick too hard on triathlon swims, but this time I played around with my kick force hoping to maintain warmth. Nothing worked, and my legs were turning into ice blocks/anchors. It didn't take long for that familiar tingling to show up, then full-blown cramping hit at about the halfway point. Doomed. The pain and annoyance of that caused me to feel claustrophobic.

I had the slowest swim I've ever had in a half-Ironman, which kills me more than I can even describe. I know it was freezing and blah blah, but I cringed in disappointment when I saw my time. I was ready to cry, but not ready to give up. 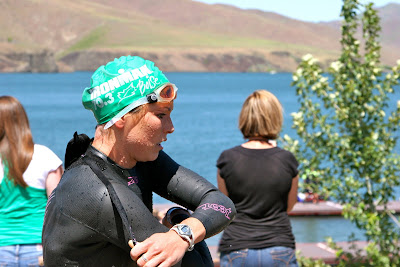 T1
I took my sweet time in T1 like never before. For the first time ever in a triathlon, I put on socks because that's how bad my feet hurt from the cold, even though it was ridiculously hot and sunny outside at that point. I headed out.

View heading out of T1: 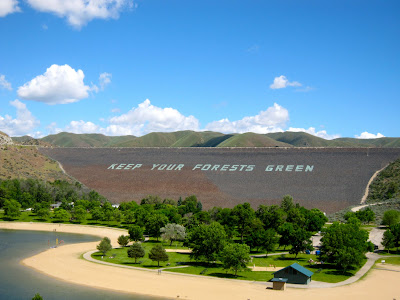 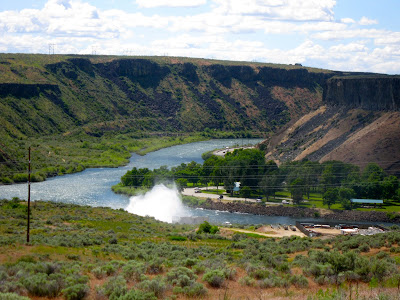 Bike
As I got going, I still was undecided on run vs. no run. Maybe a subsequent half-marathon could happen? But about 30-40 minutes into the ride, the knee pain started. Eventually, I felt it all the way up my IT Band. I decided not to bike as hard as I would in an A race scenario, and I took it down a notch. I couldn't let this ride be my season-ender.

Then there was wind.... crazy mo-fo wind! Hold on it's gonna be a bumpy ride, yee haaawww!

I've experienced gnarly winds, but never nonstop gnarly winds for a full 56 miles. For the most part it was either a headwind or scary crosswind. I heard the gusts were between 30-40 mph. Not sure if that's true, but let's just say I was more than ok with going 10 mph on some stretches vs. death and dismemberment.

At one turnaround point between miles 20-30, I was singing songs (I tend to do that) and waiting to see Whitney and Sara go by in the other direction. They eventually passed, in that order. I was about 6 min behind Sara, so I was making up good time from the awful swim (she swam 4 min faster than me). For a few minutes I got super motivated. But my ITB/knee was still hurting, and I think I realized my fate at about mile 30. Don't overdo it, I thought.

Meanwhile, more issues... like forgetting to take electrolyte tabs before the start and forgetting to put extra tabs in my bento box. It was pretty dang hot, and GUs+Gatorade helped but weren't enough to counter my major sweating/electrolyte depletion. Or how about this one: My saddle was slowly dropping the entire ride and destroying my lower back, knee, power & sanity. I questioned whether I was imagining it? Nope. Failed at the bike-building. Rookie! At least my handlebars stayed securely in place.

Adverse situations were hitting me hard. What could I do? I just laughed like a psycho as tears welled up in my eyes. I was loony, yet determined to stay positive. I thought about how great a trip it'd been so far; thought about Benoit, my tri friends and my family. I even thought about my triathlon-related jobs/commitments and this dang BLOG, which, btw, is always on my mind during races!!! It's cool to have followers and no longer be an anonymous face/name in the tri world... but scary too! haha :)

In the end, what a journey those 56 miles were. Incredibly brutal, but I'm glad I experienced it and survived. My time was ridiculously slow (slowest to date) but given the circumstances, I was not disappointed in that time. A lot of others said the bike was insanely hard on them, too--physically and mentally. Glad I wasn't alone on that.

For those wondering about the Boise bike course: The scenery is awesome if you like looking at mostly undeveloped open space with rolling green hills, livestock, trees, rivers, nature, and eventually downtown Boise. As for course profile, without wind, I'd say it's a moderate course: fairly hilly but not the hardest of climbs, good flat sections, decent descents, always changing directions and not boring with spectators cheering throughout the whole thing. But add in wind, and it's hard as can be! 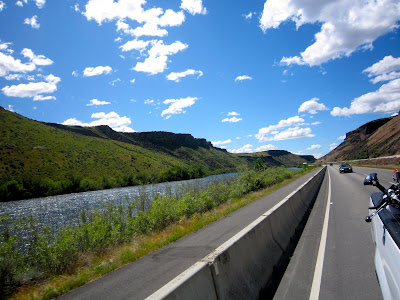 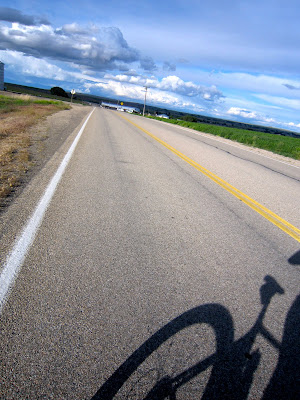 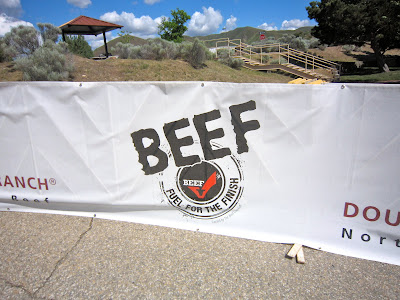 T2 & The End
The most emotional part of the day.

I hopped off the bike, hobbled to my run bag, put on my shoes, jogged back and forth in transition deep in thought.... A 13.1 mile run would likely mean the end of my season. Heck, I was suffering on the bike and could barely "run" in transition area! I couldn't bear the thought of digging myself deeper into an injury.

Next thing I know, I was in medical with an ice pack on my knee and a smile on my face. I didn't feel like smiling, but I made myself do it anyways, and eventually that smile felt real....

I know I made the right decision and am thankful for all I learned and endured during the race. Oh lots was learned, and it wasn't easy.

Hanging out at the finish and cheering. Bitter sweet... 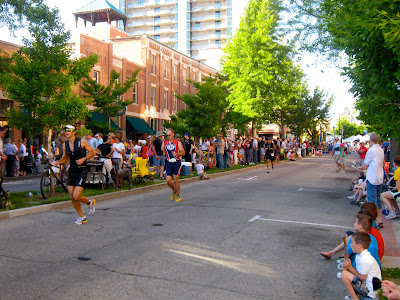 Waiting for Sara (who did great)... 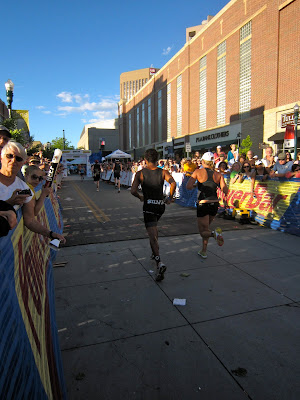 Just like that, the day was over. At around midnight we remembered that we had to pick up our bikes. Oops. We were nearly the last ones to do so, even the racks were taken down by then... late again haha.

Here we are getting the bikes, all smiles. I was down but definitely not out! Life could be worse. And you better believe that beers and good times followed. We played until 3 a.m.!!! 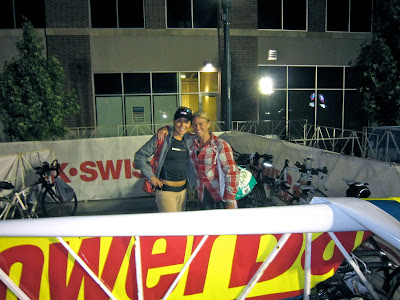 Next up, story of the best girls trip ever. 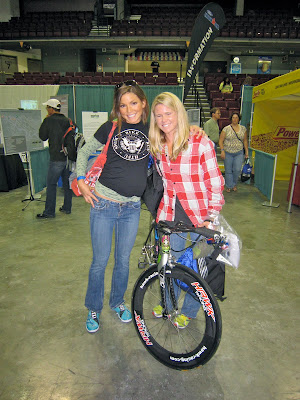 (Oh, and PS - I will get out those recipes from the Food blog soon. Thanks for the great comments)
Posted by Tawnee Prazak, M.S., CSCS at 10:54 AM