View of downtown Boulder from above..... 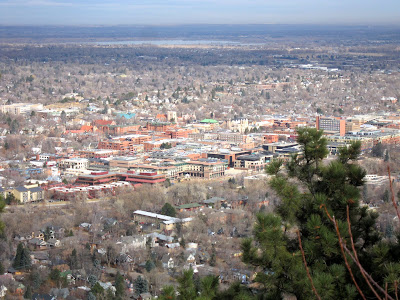 I had to fit in one last trip in 2010 and Boulder was calling my name. Multiple reasons for that...

1) I've heard such great things about Boulder from the triathlete community that inhabits the area and other friends, so it's been on my destination list for a while with the ultimate idea being: I might leave SoCal eventually and need to explore potential places to live.

2) I wanted to get in outdoor activities in real mountains away from crowds and stoplights, i.e. somewhere other than the typical SoCal scene.

4) Experience the culinary scene, of course!

5) Be part of a research experiment testing a new device that may enhance athletic performance. Cutting edge. More on that later.

6) My good friend offered me a cozy guest room to stay in and I could afford to take a few days off, so that sealed the deal!


Sunday
After four hours of bike/run that morning I grabbed my bags and was off, on too much of an adrenaline high to give into tiredness from the past week's craziness. I arrived at DIA in the dark and headed into Denver for dinner. My first culinary adventure occurred at a noodle house called Bones, where I tried bone marrow for the first time, as well as an amazing Soba noodle dish with lamb carpaccio.

For those unfamiliar, bone marrow is a nutrient-dense fatty protein served in the bone (right from the source). It's a gourmet delicacy, nutritional powerhouse and very primal, triple whammy! 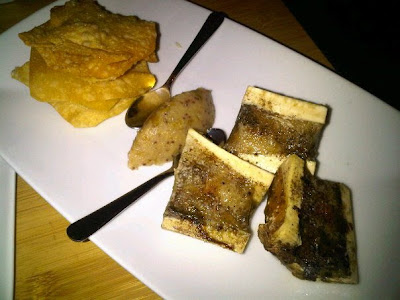 Monday
The action began bright and early with a hike up Mt. Sanitas, which is a fairly steep climb that was about a 2,000-foot elevation gain from my starting point in town. Sanitas reminded me of the mountain version of Thousand Steps Beach in Laguna Beach... times 10. After making the summit, it was a quick trip down and over to Boulder Creek to explore more. All the while, I definitely felt the effects of being in altitude, but it wasn't as bad as I expected.

From the top of Sanitas Notice how open space surrounds the city. That's not just by luck. 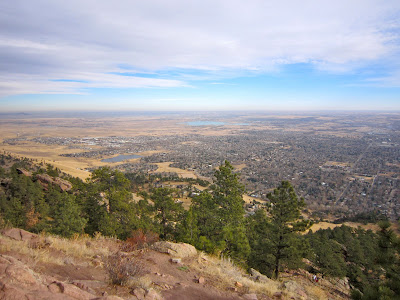 Near the bottom looking back up. 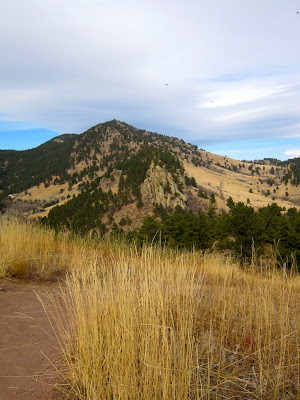 Boulder Creek (which is like night and day compared to Trabuco Creek by my house, the latter being dirty bacteria-ridden chocolate-milk-like grossness lol) 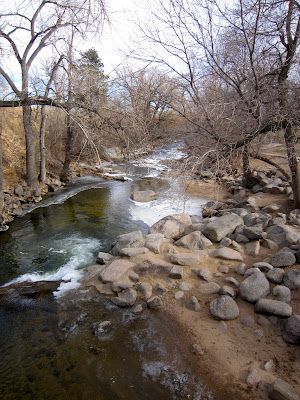 That afternoon I explored downtown Boulder with my tourguide, Allen Lim. I fell in love with the town, probably because it's the polar opposite of a place like Rodeo Drive in Beverly Hills, an area I truly dislike. Boulder is full of funky, cool, one-of-a-kind shops that are anything but mainstream, and the crowds are friendly too! As for the dining scene, pretty much every restaurant is also unique and offers fresh, locally harvested food that's prepared fresh and flavorful. Fresh fresh fresh. I wish I could always know the source of my food here in SoCal -- it seems so easy in a place like Boulder!

Monday night I had the privilege of eating at Frascas with Allen. This place is a must if you're in town! The place offers gourmet Northern Italian cuisine (so not the typical pizza/pasta Italian joint) and the most hospitable service ever. The most unique spin on the night was our table location -- Frascas has a new concept where they seat guests right in the kitchen where the action happens. 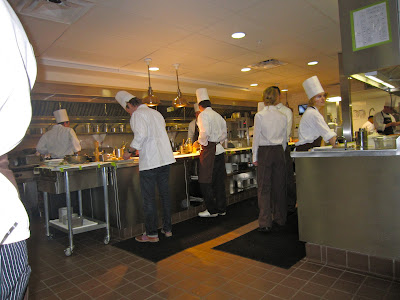 Our meal was six courses all paired with wine. Everything with light and in smaller portions so even though it was six plates of food, I never felt overly stuffed. Plus, it took about three hours to get through the meal -- nice and slow pacing, the way to eat. 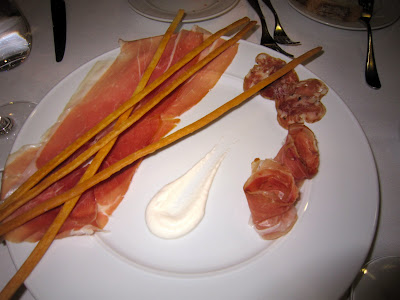 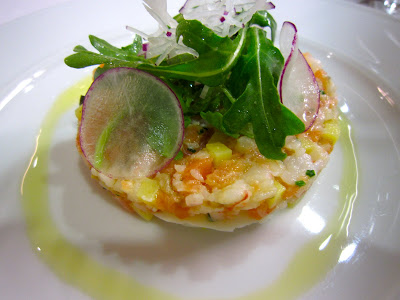 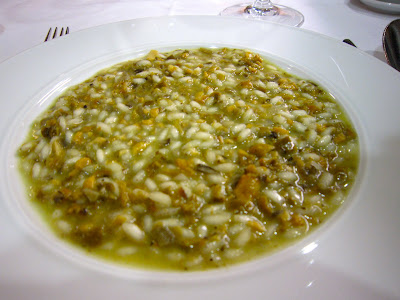 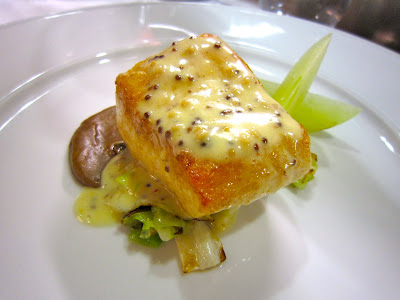 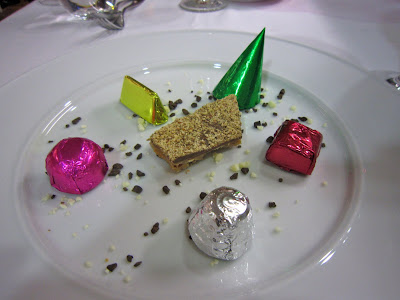 Tuesday
Cross-country skiing / dental appliance day! More on the latter later :) Anyways, thanks to plans made by AL, a group of us headed to Frisco for cross-country skiing, something that's been on my bucket list for a while! Boy, was I in for an adventure.

Before we headed out I got to witness the legendary creation of "Dr. Lim's Rice Cakes." I've been wanting to try these little morsels of amazingness forever, made by the doctor himself -- finally! Conclusion: I'm hooked. Click the link to see how these things are made. Perfect fuel for exercise. 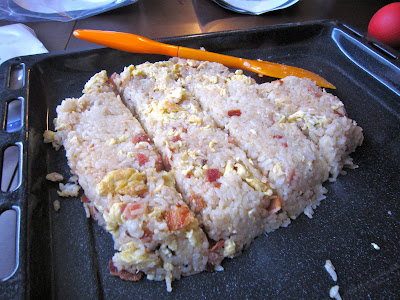 To sum up my first experience XC skiing: I started off as a total klutz -- just going forward was a challenge haha. It was pretty funny to watch, I'm sure. Despite having years of experience snowboarding (even some downhill skiing and ice skating) I was a dud on the XC skis. I thought I'd be doomed to the mini "beginner's loop" for the day while the rest of the group went off on the trails. But I don't easily give up nor was I going to get frustrated; I just kept trying and smiling and laughing and sweating.

Allen, me and Ian MacGregor (former pro cyclist from Garmin-Slipstream) 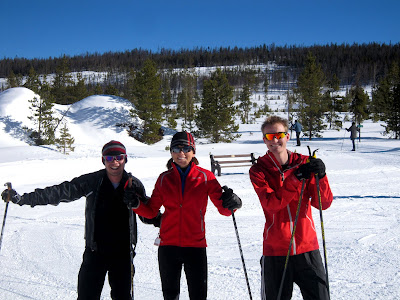 Eventually I started getting the hang of it; well enough that I could go off onto the real trails with the group. Man, that was so fun!! Everyone said I won for "most improved" that day. Overall: total BLAST and one hell of a workout! No wonder Nordic skiers are known to have the highest VO2max around.

I skied with people who knew what they were doing... it's OK because they turned around often to make sure I was still there. I didn't mind bringing up the rear at all :) 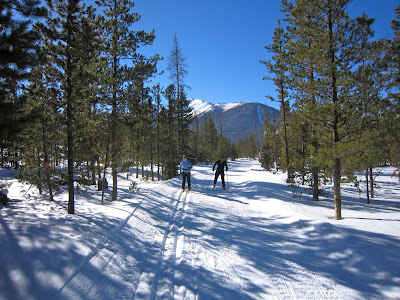 Random chair lift... good place for a quick breather since I wasn't a very efficient and probably was working harder than the others, but in a psychotic way I didn't mind that at all :) 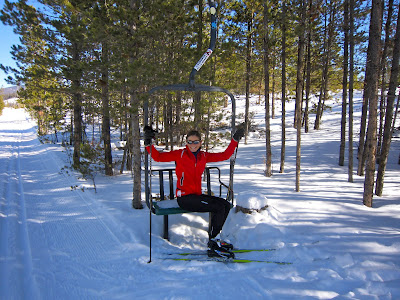 Tuesday afternoon was a rush to get to a dentist appointment (yes, I'm serious). But not just any appt.; this one involved observing and being part of a research experiment. The ordeal involves custom mouthpieces that might improve endurance performance. It's quite a concept, but I'll save details for a later post. It's getting some attention though, and even renowned physical therapist Kelly Starrett was around to check things out (it was quite a treat meeting Kelly, btw), as were other pro cyclists who were getting fitted for a piece, including Taylor Phinney. 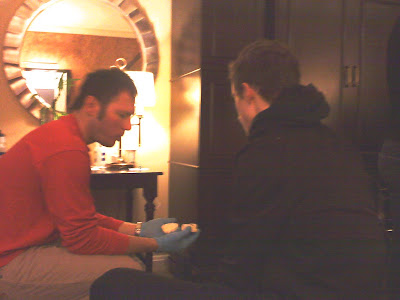 My mouthpiece fitting took 2+hours. A long process; and that's just part one. As you can imagine, I was hungry after that -- I was probably still burning calories from my inefficient attempt at XC skiing -- so off to another culinary adventure: dinner at The Kitchen. Like Frascas, go to The Kitchen if you're in Boulder. Here was my main dish (talk about color, flavor and freshness): 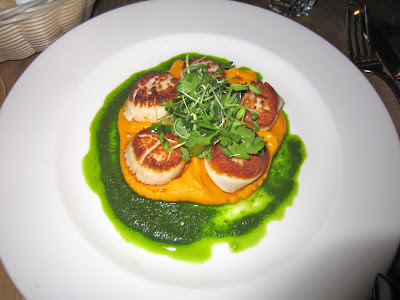 Wednesday
My last day, so I had to get in more outdoor activity (aka sight-seeing while exercising, the only way to go!) before leaving. I bundled up and headed out for a picturesque run along Boulder Creek. Cycling, running and even walking, in my opinion, are the best ways to get to know a new area. There's so much more you see and take in vs. driving. During my whole run I was devising plans on how I could move to Boulder sooner than later ... it only took a few days to realize this place would be good for me at some point :)

Morning fuel before the run... elixir of freshly juiced veggies/fruit with protein powder and other healthy stuff + nut butter mm mmmm. Too bad I was burping broccoli on the run haha! 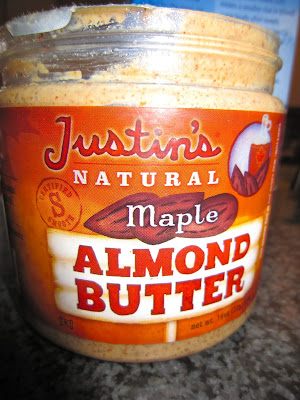 Chily run... but I just missed the real snow storm! 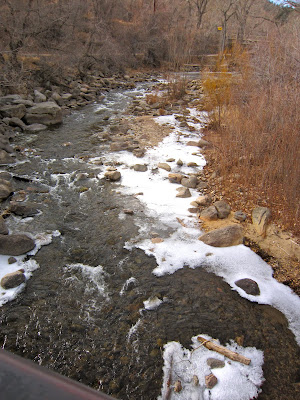 Before leaving, I had a few more stops to make including 1) Amante's for another of their excellent espresso drinks, 2) Whole Foods to pick up some of a Boulder special: Justin's Honey Almond Butter... (there's also maple, chocolate and some others... bottom line: Justin's Nut Butter might be the BEST in the world), and 3) the base of Flatirons to get what's apparently "the iconic Boulder photo." 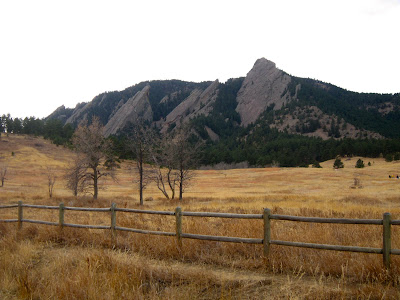 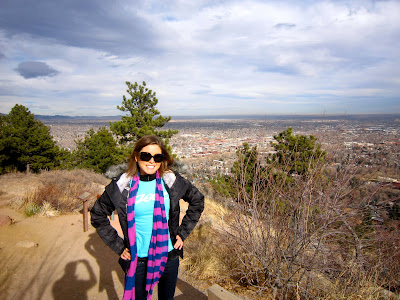 Then back at DIA waiting for a my flight. Of course it was delayed... but I'm just thankful I made it out given the weather conditions and crazy flight situations all over the U.S.
Posted by Tawnee Prazak, M.S., CSCS at 8:00 AM

Email ThisBlogThis!Share to TwitterShare to FacebookShare to Pinterest
Labels: Boulder