An Actual Day Off, and a Cover Shot?!

Weird things happening around here. Must mean one thing: Race week! (That doesn't really make sense, but whatever, go with it haha). It's been since August since I really felt the "race week" vibe. I didn't really do anything majorly taper-ish last week (that was the plan), but this week I will. Although, last week I did take a full day off from any physical activity. I decided to sleep in, was super busy during the day (a drive to LA, teaching classes in OC, etc) then lost all motivation to train that evening. I felt fine and I'm sure the workouts would have been decent, but I think mentally I wanted the day off more than physically. It happens; not often though...

I was looking back at my training log as I wrote notes on my day off, and realized, technically, I have not taken a full day off since mid-January. I have swam, biked, run, and/or sweat in some form more consistently than ever, I think. That was never a goal or something I was paying attention to; but noticing it was interesting. I am loving that I'm at that place where mentally and physically I can hang like that. Technically, in that time period, I had three "s/b/r off" days in February but they weren't just lying around: two were hard, full days of snowboarding, and one was a full day of modeling, which included a lot of running (you can see more on that below....).

The point is: It's possible to build the body and mind to train daily, if that's what you desire. Doing it "right" is the key, though. Easy days are truly easy, and hard days are hard. Simple but often not followed by many of us because we get too wrapped up in pace or whatever.

For example of how this works:
An "easy" day for me -- actually two easy days in a row -- consisted of:
Easy Day 1) 1400 yd recovery swim, and 25-30ish min of functional strength training.
Easy Day 2) A 60min spin on the trainer with HR/watts Z1-Z2 (on easy trainer days I usually just ignore data and ride easy by feel).
Also note, those easy days weren't really planned by Lucho and I. Rather, I just happened to not be feeling so hot so I scaled back. But it paid off, because I followed that with two hard days:

I even trained through sickness for close to 2 weeks, but by taking care of myself I was still able to get in good training and recover from the cold. That's tricky, and I was second-guessing my activity level at times, but I was determined to get sh*t done because it was the thick of O-side cram time. I survived. Been feeling 100% ever since.

Enough on training. There's one more thing I want to share. Going back to that "full day of modeling" that included running around. This week/month, the hard work from that day is on display: 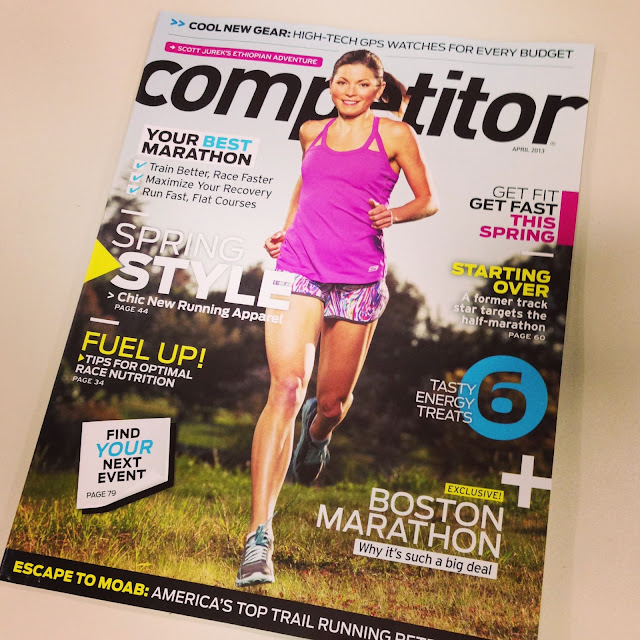 It's truly an honor to be on the cover of this magazine -- a publication I've been reading regularly since I got into endurance sport! I also had the honor of working with a really cool team of people which made the day super fun and fly by (thanks Scott, for being an awesome photographer, Allison for the great clothes, etc).

We all see cover shots like this 24/7 on the stands, and it seems simple: Just run in front of the camera, right? Nahhh...This particular shot was the first of the day in SD and it was still pretty damn chilly outside (woke up at 3-something, arrived in Balboa Park at 6am, then makeup, and running by 7am). I think I wore about three outfits that were potential cover material (options!), which required changing on the set (see photo below, haha). To get the shot, you just run in little laps and at one point in the lap you hit a certain spot looking "perfect" while the photog shoots -- just one photo at a time. Running for the camera is quite different than your little jog around town when you're makeup-less and looking like crap-o-la. It's really an interesting process that I love. A good challenge, and a good payoff. (So.... you can see how that was not a day off... after that we hit up various spots around SD where the running and whatnot continued!)

Make sure to grab a copy of this issue (April edition). Mario Fraioli says it's one of their best yet (nice!); plus, the cover story featuring yours truly as the model includes a lot more fun pics inside with SUPER cool running gear for guys and girls. After having tried on all the women's clothes and shoes that are featured, I can say with confidence that everything was ALL quality and something I would sport....

...Actually, I take that back. There was a "running dress" (yes, dress) that I wasn't too fond of... now you really have to get the mag to see that one haha.


A couple more from behind the scenes that day: