This may sound crazy, but I never run on a track for my training. Ever. I've had this preconceived notion that it must be so boring just to run in circles. (Kind of like how I used to perceive swimming laps.) It'd probably help if others were running with me, but the OC Tri Club's track workouts don't work with my schedule and I haven't researched when other nearby OCers run on tracks. So, basically, I stick to the roads, and do farlek and tempo runs for my higher intensity days. The Garmin 405 keeps me in tune with distance and I can get in more hills that way too.

But Thursday I decided to give track a chance. I ran over to my alma mater, El Toro High School, and it turned out to be a great experience. I'm all for track workouts now! First off, since I graduated, the school's put in a deluxe track, so that right there made me feel pro. Ha. For real though, being in a controlled area really let me test my limits and push my running. I had a hefty load of HIIT, and I was working in a high HR zone (80%-94% of my max) for a good portion of the session. I was worked by the end, but stoked. Having a structured run workout like that made the time fly by. Also, my ankle is feeling great! No pain (knock on wood) at all!! I must credit my awesome PT crew at Aliso Creek Physical Therapy. We have this running joke that I keep getting injured just so I can hang out with them... the ankle deal is the third issue in the last year-ish that's had me there on a regular basis.

While I was running, they were doing what?!

There was something else going on during my run that was depressing as hell: 6th period P.E. Yup, those kids who don't play sports, the ones who have to dress out and get "physical." Physical? Riiiiight. It's depressing to see the state of physical education today.

The thing that made me the most angry is that the P.E. teacher was threatening the kids with having to run around the track if they didn't follow directions. Since when is running a punishment? I understand that not everyone likes running (I know I don't sometimes), but we shouldn't condition people to associate running with bad behavior. No wonder America has a problem!! He should have used the threat that the kids would have to go back to the locker room if they didn't participate; not being able to play the sport would be the bigger punishment in my opinion.

Watching the kids get active was pretty much a joke too. The class broke off into guys and girls. Wait, guys and girls can't even participate in the same activity anymore? Too risky? Geez. The guys did flag football while the girls were playing some softball-like game with a handball. Huh? Some of the guys were getting into the game, which was nice to see. However, most of the girls were sitting on the ground talking about their finger nails or weekend plans for all I know--not too much physical activity! Yet, none were "punished" with having to run. One of the girls asked me what lap I was on as I passed her clique, and I said "not sure." I heard them giggling as I moved on. To think that I was the "oddball" for being so active out there is sad. Then maybe after being on the field for 15 minutes, they picked up and left. The worst example of P.E. imaginable. I hope one day that changes.

Here's what I did:

After my workout, it was time to mess with my dog, Sydney. She's such a trooper for letting me do this. I must have been a little crazed from my run. Ha ha. You gotta love Border Collies, they're so smart, not to mention she has endless energy and can run run run! She's in the perfect family. Unfortunately (for her) I don't take her on runs with me anymore because she poops all the time, and running with a bag of poop isn't very fun. 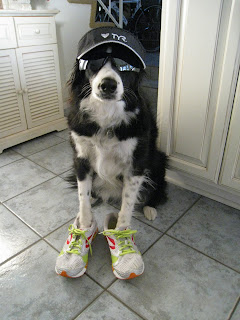 Here's Sydney asking to be fed. When we eat, she eats. Well, not every time--if she ate every time I did, she'd be a fatty. But she's hilarious, she'll sit there and tap her bowl until we fill it. She has my family so whipped! 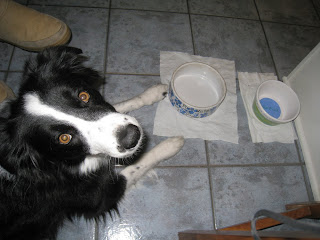