This has been the busiest week I've had in a while, but it's been one of the best weeks! I thrive off having tons to do, even if I occasionally bitch and moan about it - but that really only happens if/when sleep starts to suffer. This week was also my third hard week of training, and unfortunately my volume suffered a tad because I had to devote lots of attention to two major exams, a project, finals prep (such a nerd!) and work stuff, I also did some fun stuff like get an hours-long bike fitting and hear pro triathlete Chris Legh speak at Tribuys. Those last two were clearly not "mandatory," but they might as well be in my book! So next week is a recovery week, which works out well because I decided last minute to sign up for the Encinitas Sprint Triathlon May 17. I'm addicted to racing. Thankfully I have good friends in SD who let me crash with them.
My Sunday morning ride was probably the highlight of the week. Got on the road early after having my power oatmeal, and was extra excited to test out my new bike fit on a long ride. I love getting started before the masses are out. Something surreal about being in Santiago Canyon all alone, especially at the top of Modjeska Grade Road....which you can see below. Even though it was kinda cold out, I was sweating like crazy of course! 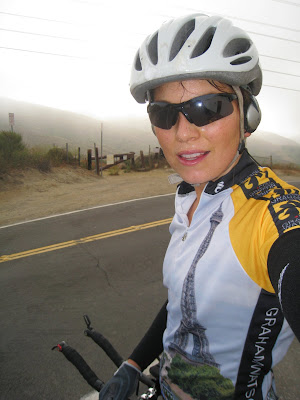 By the way, see that jersey? That's my France jersey that serves as motivation to do Ironman France. I really want to do it in 2010, but I don't want to do it alone and don't have anyone crazy enough to do it with me yet.

This next picture isn't from this morning, but while riding I made a mental note to mention it. The property below is on Modjeska Grade Road, and the original house burned down in the 2007 fires. Those fires were awful for everyone who suffered, but I was extra upset to see the canyon, which I consider my backyard, go up in flames. Anyways, after this home burned down, it remained a vacant lot for a long time. A U.S. Flag and a sole chair were the only things there. It was heart-breaking to ride by it all the time. A while later construction began, but it's been slow to progress. Finally, things are looking promising for the owner of this property, as the house is really coming along! I took this photo about 2-3 weeks ago, and this morning there was even more work done! It's been quite amazing to watch the transformation of this property, and I can't wait to see the finished product! 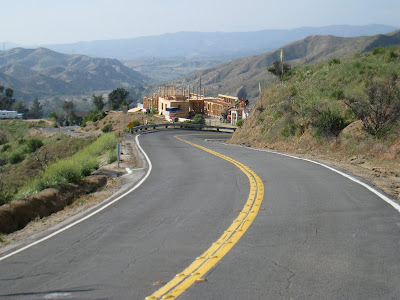 Another thing that caught my during my ride was OC Duathlon signs! I can't believe I'm doing this race. What am I thinking? My running fitness is nowhere close to what I wanted/expected it to be by this point in the year, but that's life for ya. Damn ankle sprain. And as nervous as I get about the swim before a triathlon, I don't think running a 5k right off that bat sounds ideal or even that fun. It should be an interesting experience. At least I know the course like the back of my hand. 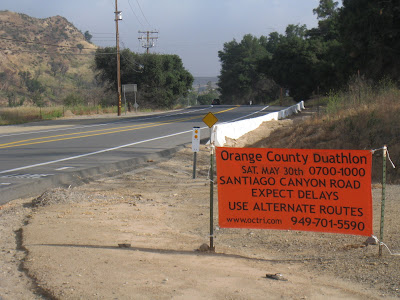 So my ride was basically epic. I was happy and smiling. Life is good right now. I sang out loud to the songs on my iPod, I drained the sinuses with a gagillion snot rockets, I reached and held speeds of 35 mph+ multiple times (shhh, don't tell my mom) and the best part: my new bike fit is PERFECT. The Felt is finally truly dialed in to fit me as much as it can. I also had an epic "target practice" win. The guy had been drafting off me for like 15 minutes, then he finally passed me, then I got stuck at a light that he made, but I still passed him going up a long hill and on the downhill I never saw him again. Woo hoo!! After the ride, I got in my fourth run for the week. This one was a lot cooler than the scorchers I put myself through (on purpose) on Wed & Thurs.

To wrap things up, I have to mention this last picture because I love Syndey. (We've almost had her for fives years now; can't imagine life without her, or a dog around for that matter.) So, I do a lot of work on the desktop in my room, and Sydney loves to distract me and try to get me to play with her. I'm such a sucker. I always give in; how could you say "no" to a face like this: 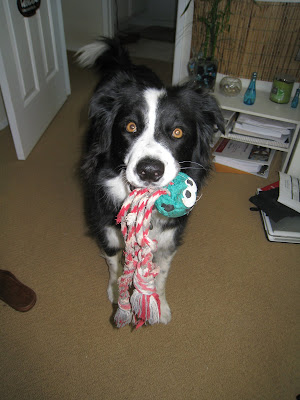 Happy Mother's Day to all you moms out there. I have the utmost respect for you all!!