Warning: My parents actually came to this race so there's lots of pics and even some video in this blog. All tech'd out!
So June gloom came a little early and in the form of what I consider rain (those who have "real" weather would probably disagree). Into Friday night that was the name of the game, so I couldn't wait to see what Saturday morning would be like for the OC Duathlon. I was ready to race in any conditions, but to my surprise Saturday morning was fairly dry and not even that cold.
Now this was cool: How often do I ever get to ride over to a race from my front door step? Hm, like never. The du was 3 miles from my house, so I took off at 5:45 for a nice little warm-up ride. Here's Sydney seeing me off... you can see it looks kinda damp/crappy out. 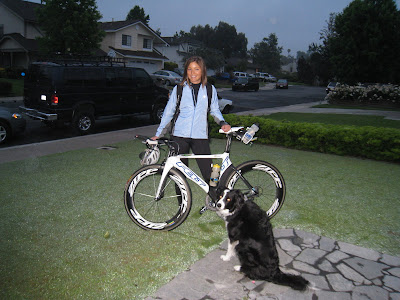 Got to the race earlier than most (as usual), racked up and hung out with some familiar faces. Here I am with Pete and Corrine, they both do ultra-marathons and are just really good, nice people. Glad to know them. 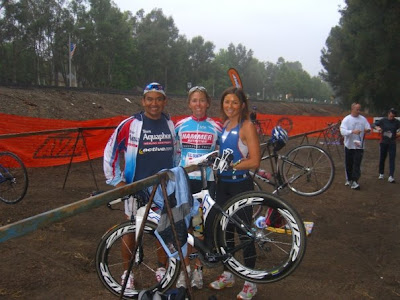 Another plus to having the race close to home: Before my parents I came I made a special request: Bring deodorant! I forgot to apply before I left, so thank God they grabbed some for me. Would hate to offend anyone.
Wasting time b4 the race, overlooking transition and trying to scope out Michellie Jones' rack spot. Her Felt puts mine to shame, ha ha. 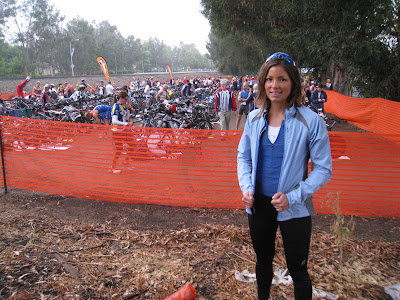 And here we are right before the race start. 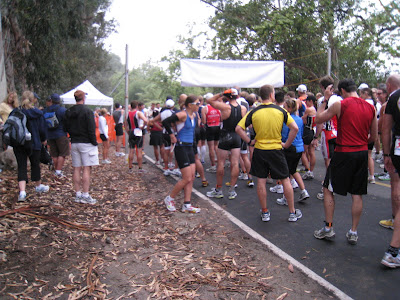 Now, I didn't taper at all this week and it's been another hard training week, so I didn't have big expectations for this race. Plus it was my first du ever, so who knew how it'd go. My goal was to do the 5k's in 23 minutes or less, which I know I did on the first one--wore my Garmin and avg'd about 7 minute miles. I didn't try to kill myself and go all out. Good advice I got: leave some gas in the tank for the 2nd 5k!
A video of me finishing the first 5k:
Going into T1 was crazy. Since it was a mass start, there was lots of traffic in transition heading into the bike, as you can see below. I politely told the dude in front of me to "pick it up!" He was moving like molasses. 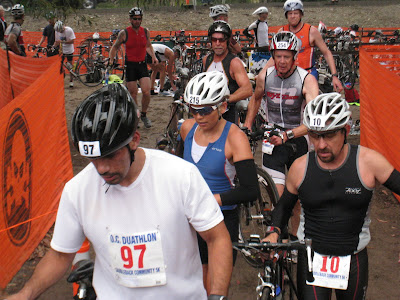 Onto the bike. Within 2-3 miles (heading into the canyon/mountainy zone), it was WET! Super heavy drizzle/light rain. Before I knew it, I was covered in specks of muddiness as was my bike. Visibility was sketchy, but I was glad to have my Rudy's blocking raindrops from stabbing my eyeballs.
It was crazy to race on my regular weekly training route... I liked knowing what to expect at every moment. The guy who normally sells beef jerky on the roadside wasn't there. Too bad. And too bad we didn't do Modjeska Grade Road! ha. It was also crazy how alone I was for most of the bike. It was pretty spread out and not a lot of passing went on my "time zone." It was even crazier to see Luke Bell, Michellie and all the other pros/elites fly by! I wonder what they thought of the course.
Overall, I was happy with my bike. I wanted to average 20 mph, ended up averaging 19 mph. I attribute that -1mph to the conditions ha ha; although, I did get up to roughly 35 mph several times. Adrenaline rush on slippery roads!
Here's me about to dismount with some beautiful blue scenery in the background. (That's not a lot of Port-o-potties for a race, huh!?) 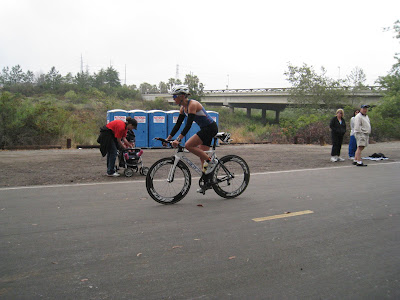 The second 5k was of course more difficult, but I just went through the motions knowing it'd be over soon. I looked at it as if it were a regular T-run after a Saturday ride--with a little more oomph. I was not a fan of the surprise hill at the very end of the run. That sucked.
Here's Michellie Jones crossing the finish at 1:40:47... first-place female (of course). She's so amazing, love her! Luke Bell won with a time of 1:30:47. 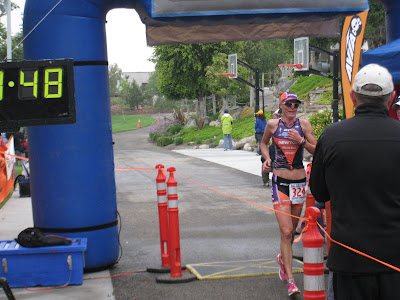 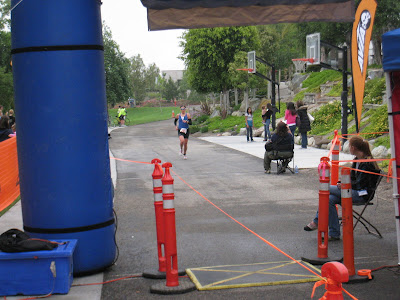 I caught up with my dad and Syd in the "dog zone" post-race. Saddleback Church (where the finish/post-race events were) would not let doggies close to the action so they had to hang out in the distance. I'm sorry, but I find that to be lame. 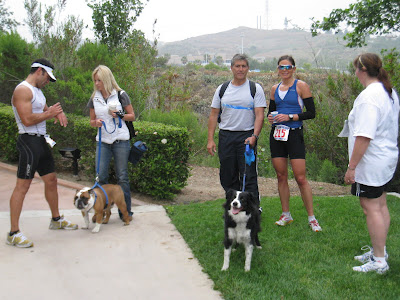 Then time for awards. Now here's something that makes the statement "it's a small world" so true. The OC Tri Series race director, Bill Leach, was my mom's teacher at Corona Del Mar High School back in the '70s. He and a student fell in love back then and together they went to the Olympics for kayaking. Then, she, Julie Leach (Bill's wife, who my mom had many classes with growing up) went on to win the Ironman World Championships in 1982! Gnar. And today, they are clearly both active in the tri world.
Here's what Bill had to say about my mom and her dad (my grandpa) when I got my award...
Then I had to leave cause I was freakin freezing. When I got home I realized how DIRTY my bike got. This picture doesn't even do it justice, but I assure you I cleaned it right away. Well, that is, after I ate a nice big meal first. 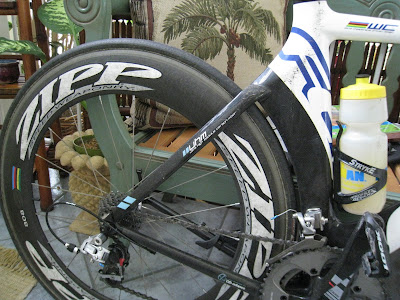 After eating, cleaning and looking at Honu 70.3 updates, I took my mom out for a 30+ mile ride (for Mother's Day I promised I'd "kill her" on a grueling swim, bike and run). We've done the run, so today was the bike. But unfortunately my legs were toast. I was pissed about how crappy I felt, but I'm still glad I got in some solid riding after the race... My mom kicked ass, so I'll have to really push her limits on the bike another time.
Posted by Tawnee Prazak, M.S., CSCS at 5:59 PM