I was reading a post on Mark's Daily Apple today on weight, and I found it ironic that in the last couple weeks my weight has been on my mind quite a bit, so much so that a scale has creeped into my routine--yuck! 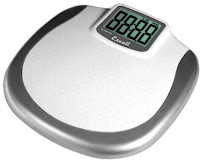 It started when I went to the doctor for a routine visit and I was shocked when I stood on their scale--up nearly 10 lbs since the last time I weighed myself (ok, yea, I had just eaten and was fully clothed). Still, I was a little taken by the number because I NEVER weigh myself, so this was news to me. Last time I stepped on a scale was maybe back in January or February? I like to go by how I feel and how my clothes fit, rather than focusing on a number. So I retested my weight the next morning at home, before eating and in minimal clothing, and sure enough I've gained about 7-8 lbs. But I have an idea what the dealio is with this unfamiliar number.
1) I wanted to gain some weight. Going into IMCA I was a tad on the skinny side, very low body fat and just not enough substance (i.e. muscle) to power me through the race like I wanted to. So after April 4 I declared I wanted to make some changes and become more of a powerhouse...
2) Subsequently, I've increased my caloric intake a bit, particularly taking in more calories with and after workouts. I also will have maybe a couple extra eggs at breakfast, an extra serving at dinner and eat a lot even on days off. The thing is, I eat insanely healthfully, like borderline crazy, but I guess you can even have too much of the good stuff.
3) I don't deprive myself. I snack, and it's often at night. If I'm eating out with friends I don't overly analyze what I order--no one wants an anal eating companion. I have wine and/or beer every now and then. Etc, you get the idea. But maybe I've been indulging on all of the above a little too much.

4) This may be the most significant factor: I've been strength-training a lot more and have actually gained muscle mass! And obviously that means I've gained weight, and those are lbs I'm OK with. I'm honestly stronger than I've ever been right now and am stoked about it.
However, though I've gained the muscle I was hoping for, I've also gained some pudge as an unintended side effect. Hey, I don't have my body down to a science. You'd think burning anywhere from 700 to 3,000 calories in one workout nearly every day means you can eat whatever, but not necessarily, at least for the type of high-performance body (machine) I want to have. I got a little more love-handle going on right now than I'd prefer.
I'm not sccrrrrrd though. It's time to get serious. I've had to lose weight before... Yup, I've been through chubby stages and I put on that freshman 15 back in the day (Ohhh SDSU), but I know how to get it off. It's not rocket science--calories in vs. calories out.
But now that I'm a focused athlete, it is a little different. I don't want to lose any of my precious muscle, nor do I want to workout in a deprived state and have a sub-par performance, so I'll just have to be creative and smart. And, in reality, I don't even need to lose much weight, maybe 3-5 lbs? I just see it as a new challenge.

Anyways...
NEW FAMILY MEMBER
In other news, I new addition to the family arrived today. My fixed-gear bike! After a lot of Internet research and bike-shop hopping, I found a sweet deal on a fixie at Republic Bike. They're based in Florida, and have great deals on new, custom-made bikes where you pick the colors. Still, I was a little skeptical. But then I noticed Charisa has a new fixie that looked similar to the ones at Republic, so I asked her... sure enough hers was from Republic, and she had great things to say about it, so that confirmed this wasn't some gimic. So I picked my colors and placed an order. (I warned Charisa that I might end up with the same color frame... the wasabi is just so cool!) I didn't expect the bike to arrive so fast, but today, I got to build this: 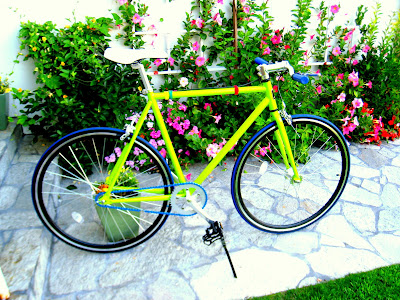 Can't wait to take him out for a real ride. Wonder if I can make it up a legit hill? Well, I'm going to have to learn... This baby is going to get a lot action, taking me around CSU Fullerton, down to SPI and many other places. Now I just need a sturdy lock.

Annnnd lastly, I'm getting ready to leave for my favorite place: San Diaaggooo. San Diego International Triathlon is Sunday, and thankfully I'm pretty much fully recovered from what turned out to be a nasty nasty cold. I'm still blowing my nose like a crazy woman (riders near me on Sunday, beware of flying snot and don't take it personally if I accidentally shower you). But I feel lightyears better than I did last weekend, so we'll see how things go! I'm really excited. I'll be looking for familiar faces out there... and trying not to snot or sneeze on you.