Ahh what a weekend. Can't believe all I've done in the last 48+ hours. Exhausted. The highlight, of course, was racing San Diego International Triathlon. All things considered, the race went very well and I'm stoked on the results.
I say "all things considered" because a couple minor things worked against me in this race. 1) I'm still battling a cold; 2) My transition area was in BFE. Normally I wouldn't even mention something like that, but it was so far in the boonies that it likely added on 2-3 minutes extra transition time that not everyone had to deal with. But that's racing, and those were the cards I was dealt. Rise to the challenge, right?

I had two goals for this race: 1) Feel pain, the good kind 2) Get a sub-2 hour finish. I achieved one goal: I made myself suffer. Didn't get the sub-2hrs, though; maybe it was the transitions because according to my watch I got the times I planned for myself on the 1k swim, 30k bike and 10k run. I finished in 2:02:39 (so close!) and got 2nd in my AG, literally 5 seconds behind 1st place in what was an INTENSE sprint to the finish line. Whitney Handy, who I know and like a lot and who's doing Vineman 70.3, was the rockstar who just edged me out. Good job girl!

Pre-race
Got into town early to enjoy the weekend. Saturday morning I did a 35/20 bike/run in La Jolla as my pre-race warmup. During, something totally unexpected happened: my heart rate shot up into the high 170s, wtf?! I don't know if it's b/c I'm still sick or the couple glasses of wine I had the night before, but I didn't like that. At all. Hmmm.

Saturday night we ate at Bali Hai on Shelter Island (great view), and I ordered a Kona Special dish. Appropriate, right? I also wore my Newtons to dinner b/c my feet were killing me after tons of walking in sandals earlier at the race expo/bike drop off and I had no other comfy shoes. Yea, I looked dorky. 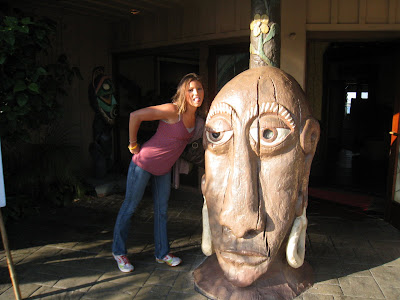 Dinner with friends went late, and I managed to sleep maybe 5 hours. Blah. We also set 3 alarms which all gloriously awoke us at 4:30 a.m. That was fun.
Race morning I ran into some very special people... the Golden boys. No, really. Brad Golden (my ex/now good friend), Brian Golden (dad) and Rory Golden (bro)...in order w/ my mom and me in this picture: 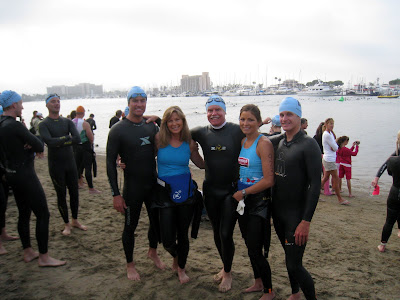 I had just finished picking Brad's brain of everything race-related merely hours before because the dude just qualified for Kona at IM Cour de'Lane. He gave some good tips, one of which helped me tons today, something I'll for sure do again at Vineman! The Golden boys were swim buddies at the race and it sounds like their help was very much appreciated. Good job guys!
Swim
7:15 and I was off! Great conditions all around. It took a while to get my groove, and when I did, I got kicked. Twice. Hard. In the ear area. I've never been kicked so hard where it leads to a ringing noise, pounding head and discombobulation. I sucked it up and continued on. Found a rhythm again and was feeling OK. I think I did alright for my weakest link, finishing in 16:xx I believe.
Look! There were still a decent amount of white caps (my wave) behind me, (I'm the crazy girl running out with her eyes closed): 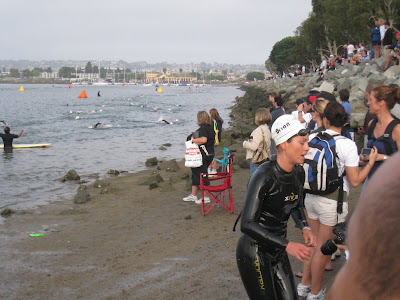 T1
Because of my ridiculous transition area placement, this time was ugly. My T skills were fine though!

Bike
I wanted to hammer on the bike because, well, it's my strength. My goal was to average 20mph or more, which I think I did. Finished in 53:xx for 30k according to the Cateye. Thankfully, I've ridden up to Cabrillo Monument several times and knew what to expect. Talk about a gorgeous view and even more gorgeous day! I ate a Hammer gel halfway thru even though I didn't feel I needed it and also drank a water bottle with Zym. Tummy hurt toward the end. Bummer. But not devastating.

My dad caught me biking in... 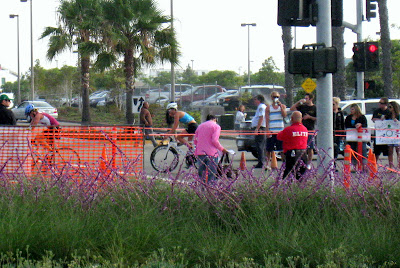 Ohh Dad. I appreciate and love so much and am so grateful to have him support us, and he really tries to get pics of us racing, but inevitably we end up with a lot of these (my favorite): 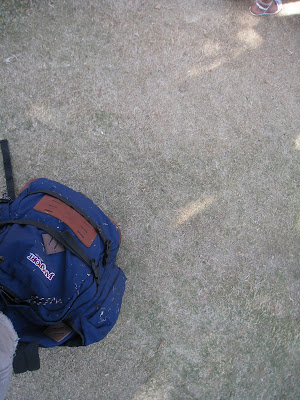 T2
See T1.
Run
This was my biggest personal test of the day. I could predict my swim/bike times fairly well, but my running is schizo this year. So the plan was to make it hurt... could I pull of a 40-minute 10k? Well it hurt, but I didn't get the 40 min. I know I could have dug deeper and pushed harder, but hindsight's 50-50. Right? I averaged ~7:30 min miles; don't know the official split yet. I remember seeing Beth so far ahead of me on Harbor Island and just wondering how she does it. I hope to be as good as her one day. (Not trying to be a kiss ass, really.)

The highlight of the run was the last half mile. I recognized fellow 20-24 AGer Whitney up ahead, within catching distance, so she was my target. I got just behind her and made my move to pass on the final straightaway. She responded and started sprint battling with me. My body was hurting all over and I tried to find it to beat her, but she barely got me... and took 1st place in our AG by 5 seconds. Whew. Then I got to thinking after the race... If it hadn't been for my darn transition area I might have made a successful pass on the run earlier on to pull off 1st AG. The logic: I'm pretty positive Whitney was with the Breakaway Training crew in the VIP/Pro area... i.e. not dealing with the extra BFE transition mini-marathon runs. But no biggie. I'm super stoked for Whitney and her win! She nailed it. We were all hugs after the race and agreed that she's going to help me with swimming and I'll help her with running (although, she might want to go to Beth for that haha).

So overall, good day. I stuck to my game plan and executed. I even kept the snot rockets in control. Kinda.

Post-race
I downed like 8 cups of water within 1 minute of finishing. It was hooottt out! And I was a little shakey after my sprint battle. Then I met up with the Golden boys again and did the usual post-race chatting while eating a million Clif Bar samples.

Also, had to wait for Mom to finish! And soon enough, there she was. This was her second race of the years, and it went excellent minus the run. She was with the top 50-54 females until the run, where she got dropped. She finished 2:17, and felt better than she did after Superseal. Improvment? I think so!
There we are all chatting in the mix of things. My shoulders got super sunburn today. Ooopps! 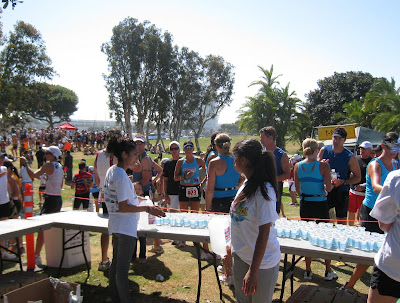 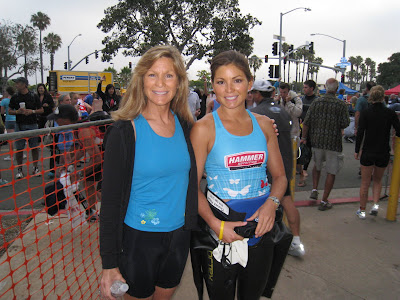 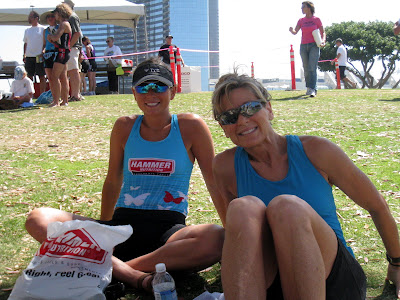 I have to say, Koz put on yet another great race, especially by getting through the award ceremony in a swift manner. Man, sometimes those can drag on forever! But I am questioning the logistics behind the transition area setup. Heard some other folks talking about it who were also PO'd, so I know I wasn't the only one who noticed. Hmmm.

I have some other later-season news, but I'll share that, well, later!