It's no secret I have a million jobs/things going on. Well, I came to a realization this weekend. I truly think my favorite gig is coaching. Maybe it's because I've been blessed with some really cool athletes whom I enjoy immensely; maybe it's because I like pushing people to get better at sport and then seeing happy faces/emails when good things happen; maybe it's the challenges of working through rough patches and handling the curveballs with them.

Whatever the reason, coaching is just plain awesome and more satisfying to me than I ever expected. I think part of that is because I only take on a handful of athletes in order to give them each the attention they deserve. Unlimited communication and developing a real relationship are key in my opinion. I won't--I can't--be the coach that runs a mass-consumer biz; you'll never see a one-size-fits-all plan from me.

Being a triathlete myself helps a ton; at least a couple times a week I train with my local athletes. It doesn't matter if we're at different fitness levels, we can still be out there together for moral support! Plus, it gives me the time to analyze them a bit and make mental notes of how they're doing. (Of course, I do offer the option of doing SBR analysis with video, in which I don't workout alongside but rather direct/watch/critique.)

We even race together... here's Marta and I at a Bonelli race last year... we both podiumed I believe :) 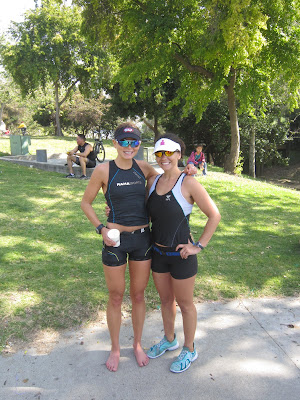 Lately we're doing the cold-ass lake swims about 1-2x a week, and it's pretty funny to watch us wimper as we get in the freezing water, get going and then start loving it. I'm seeing my athletes toughen up and improve (actually, I'm seeing the same in myself too lol). Pretty cool to share that together, as I know none of us would probably be doing the lake swims alone.

This swim wins for the craziest... extra cold and raining the whole time.... 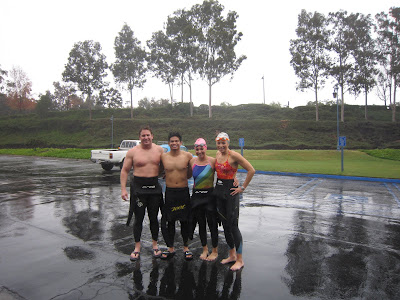 A little delusional after too much brain freeze... 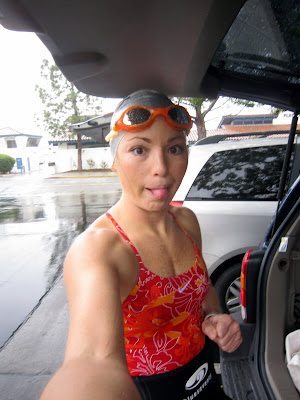 This past weekend was pretty cool too on the coaching, racing and training fronts. Saturday I did a run with one of my athletes on the half-mary course where we're racing next weekend. I've seen this guy go from essentially a non-runner to 13.1-ready in record time--so proud! Anyways, we did two out-and-back loops, and besides warmup/cooldown we never ran side by side, but you can bet there were plenty of high-fives every time we passed. Meanwhile, while I was running, one of my other athletes went flying by on her bike. I was so stoked! (Btw, this half-mary is going to be HARD! Super hilly, like mountain-y hills. With that, I'll be happy with an average pace around the 7:40s overall--slower uphills then speedy downhills.)

Anyways, Sunday I made my way up to HB to watch the Surf City Marathon/Half, tying it in with my Sunday long ride. I knew a bunch of people doing it, including one of my athletes, Ray, whom I've never witnessed doing a running race. When I finally caught sight of him (maybe at mile 9ish?) he looked so dang good--great form, solid pace, etc. I couldn't have been happier. He had a great run, negative splitting it all, and it was so satisfying for me to catch it live instead of the usual post-race phone call.

Foggy morning on the coast, perfect weather for a long run... 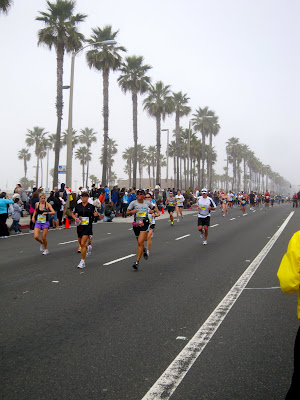 Ray and I celebrating a great start to his season (Ray's making his half-Ironman debut this year, as is another).... 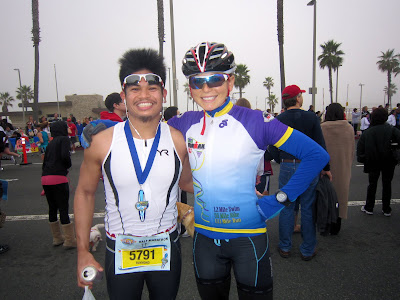 Evan (the other soon-to-be half-Ironman racer) and I gearing up for a ride... Notice, I gotta have my gum and my ZOOT Active Compression!! 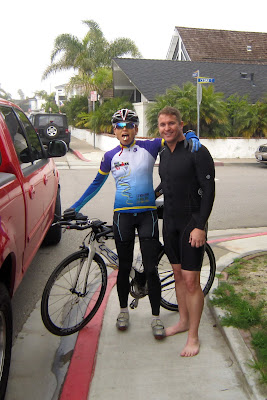 After Surf City, Evan joined me for a portion of my last long bike before the kick off of a much-earned recovery week (perfect timing with Super Bowl Sunday). From the get-go on the ride, my legs were fried, and even all the GU in the world couldn't save me. (That reminds me--tried the new GU Peach Tea Chomps, the bomb! I don't always like a lot of intense flavor, so these are perfect!!! ) Many hours later--temps had gone from low 50s to high 70s in the time I was out riding--I had managed to get in the miles. There's no doubt that being a coach and being involved with my athletes motivates me with my own training.

Anyways, all that said, I'm thinking about taking on more coaching clients... asap.
Posted by Tawnee Prazak, M.S., CSCS at 6:21 AM