Just writing "race report" in a blog title makes me smile. The last time I raced was June 2010; but it's been since last May since I actually raced from start to finish. (I made June's Boise 70.3 an aquabike due to the injury.)

So Saturday was a big day for me in many ways. I got back to the race thaaang and did a local half-marathon with my athletes Marta and Evan. The course is in Lake Forest where part of the OC Tri bike and run go, as well as the Santiago Cycling TT--on the bike path heading out to Santiago Canyon, for those of you familiar.

If you look real hard in this pic, you can see a black dot, aka me, coming from the distance :) 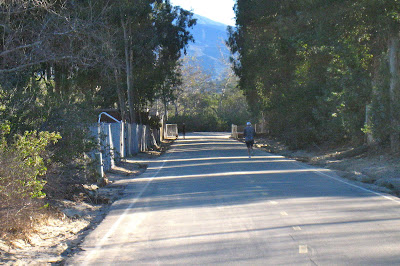 It's a gradual uphill that has some teeth, so to speak, but on the flip side it's an out-and-back multiple-loop course so there were lovely downhill sections--major relief after the 3-mile ups! The course elevation profile made for some psychotic splits--my miles varied a 6:35 to 8:07.

The best news to report is that all three of us PR'd! Not only that, but Marta got 1st overall, I was 2nd overall (of male and females). You're probably thinking, "whaaat?!" That said, in terms of placing, it's really not thaaat big of a deal... this was a very small low-key race, I'm talking 25 people only. So 1st/2nd is cool, but, well... you get the idea....

Here's us post-race with the RD, Charlie (red hat) and Ed, who plans to run 111 marathons this year (he did two marathons at this race!). 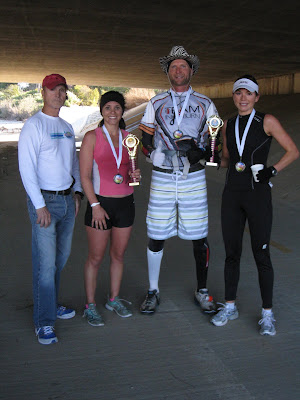 Time-wise, I ran a 1:36:38, average pace of 7:22. That was a pleasant surprise for me, as I was expecting to be slower on this course and with my current fitness. It was good to see I've made progress since recovering from the injury, and also good to see a faster time than my last and only other open half-mary January 2010 in Carlsbad, where I ran 1:37:5x. So PR! I'll take it. Not to mention, I've had a nasty little cold all week, which took a toll whether I like to admit it or not, but it was all about HTFU on race day. No complaints. Being sick just means I also won for: "most snot rockets of the day" and "the best snotty attire" lol. It got messy... oops... 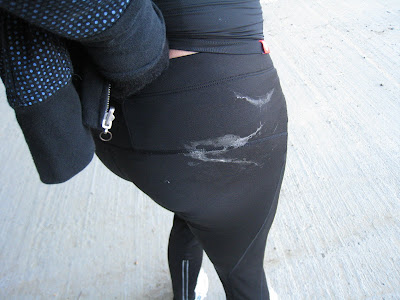 The half and full marathons started super early at 6:30 a.m. Brrrr (for socal anyways). One guy was doing his 777th marathon, plus Ed and his 111 goal. What a crowd! I love love loved it. The race itself had that ultra-marathon sort of vibe; everyone was friendly and just out there to enjoy and be social, not smash world records lol. There was only one aid station with lots of regular food, water and juice (i.e. not the "latest" scientifically-proven sports nutrition fare haha). Charlie, the RD, puts on an average of 1-2 running races per weekend every weekend of the year, everything from 5ks to 100-milers. Wow! Here's the link to the race series. Try one out, they're fun!

Anyways, we got started to Charlie simply saying, "readyyyy and go." Marta and I immediately took the lead and were running together pretty far ahead of everyone else. That felt weird to be in front. But it's not like this race had motos following the leaders lol... in fact, no one was even at the turnarounds--it was on your own good will to be honest! But who cheats? Honestly?!

Marta and I ran side by side for the first 6+ miles. It was a three loop course; two big loops, one smaller loop. I later saw a Tweet from a fellow runner who said: "@KnightsEdgeENGR 10th 2:29:23..... (but I was more impressed by the two women flying by under 1:40:XX...) U could feel their sonic booms"
Ha! how nice!

During the second loop on the 3-mile trek uphill, M started pulling away and I wasn't about to respond. I was already running that uphill faster than I ever had in my life; even faster than the first loop. I was fine with my pace. And that's pretty much how it went for the rest of the race.... just watching Marta right ahead of me. No doubt, that made me smile, cheer loudly and made me work! 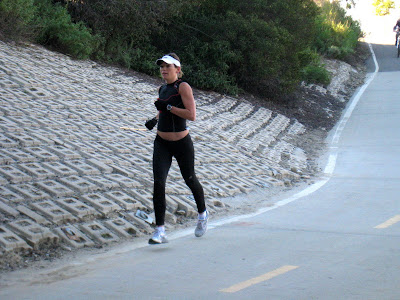 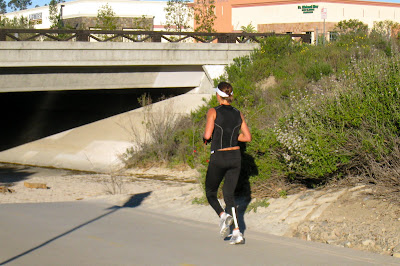 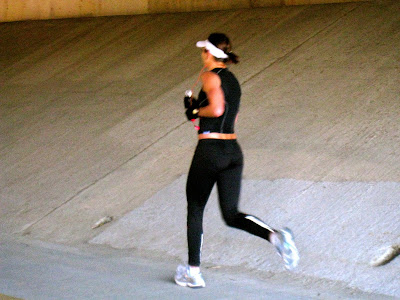 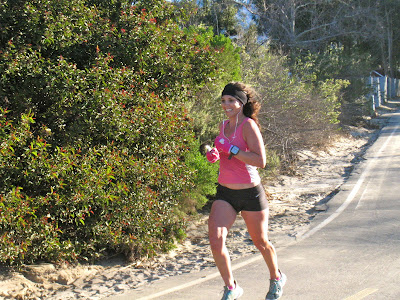 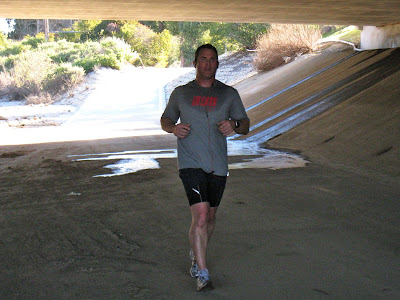 The only hiccup for me was during miles 8-10. I started getting a nasty pain on my R medial knee. It bad enough where I stopped during mile 9 and allowed myself to walk for a minute to "shake it off," do some dynamic moves. That helped a little, but I swear I debated whether it was worth it to run the next 4+ miles... I guess I'm just hypersensitive about every "odd" feeling and anything injury-ish. But I started running again and the pain subsided. Two days later, the pain is gone, but I will keep and eye out and "respect it."

Oh yea, the only other hiccup, surprisingly, were my Yurbuds. I got them in my media bag at Kona, and so far they've been just fine, but in the half-mary they kept falling out of my ear. Hm, interesting considering their tagline is "they won't fall out." Whatever, I just ran with them flailing about around my neck haha. Missed my Girl Talk and The Black Keys mix :(

Marta then me finishing 1st and 2nd: 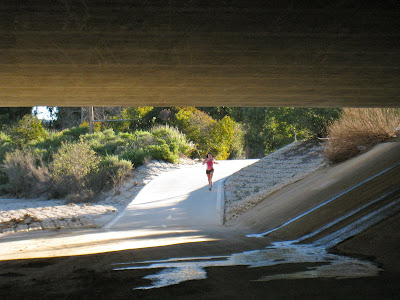 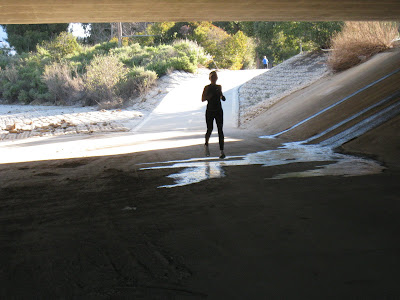 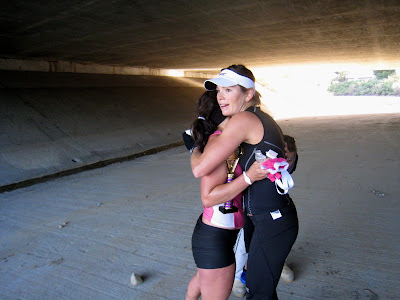 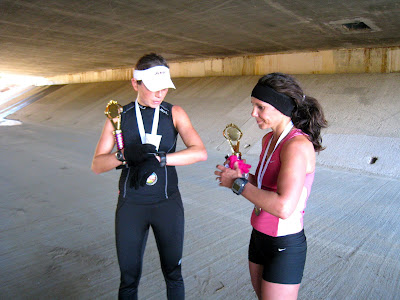 The biggest best part of the race: My DAD, mom and Sydney were all waiting at the finish. Yup, my dad got released from the hospital Friday night and made it out to watch me run. Having him there was more special than I can describe. He's doing great and will even be able to start light exercise soon! 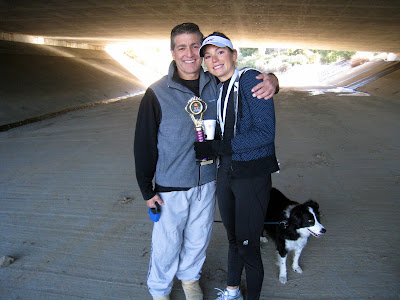 1) witnessing Marta kick butt and PR her half-mary time by more than 4 minutes! Guess I'm doing my job well with her :) 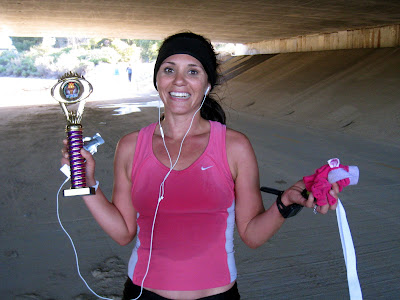 2) watching Evan do great; 9th place! He had a little pre-race incident, so I was even happier that he handled the run fine. On Friday, the day before, he was doing an short EZ run in Huntington Beach at 11:30 a.m. on the boardwalk and some drunk D-bag was riding a beach cruiser and totally took him out--literally ran into him and knocked him off his feet. Cuts, bruises and pain ensued, but Evan handled the situation well. I mean, c'mon now, who's drunk at 11:30 am.?!?! Geez. So Evan raced with battle wounds: 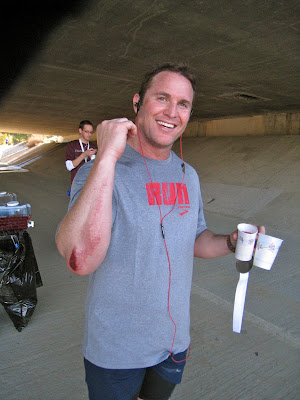 3) finishing myself and PR'ing. Heck, finishing a race always feels so dang good. Especially after such a long hiatus. 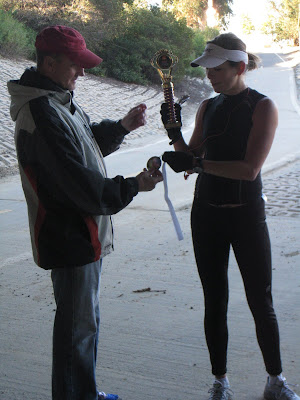 Thanks GU for fueling me just perfectly!! 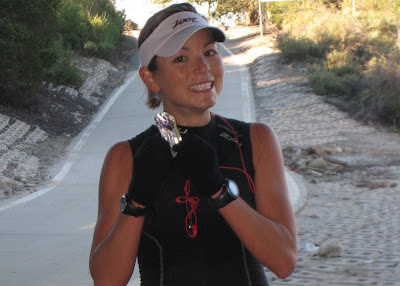 I ended the day with a ride over to the pool for a swim (I took the long way lol)... I couldn't help it; the weather was perfect--sunny and in the 80s! But don't be too jealous, they say rain is on its way blah. At the pool, some swimmers called me out for being a triathlete, lol.... 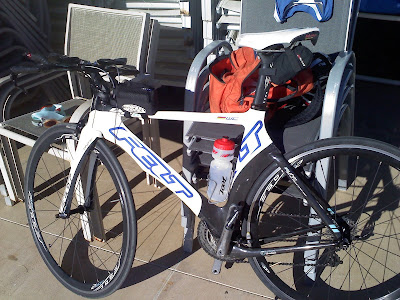 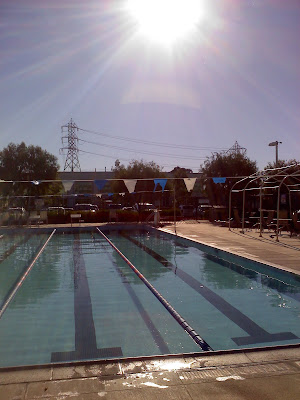 Other than that the rest of the weekend was low-key and all about kicking this cold. Unfortunately my grandma-ass missed out on two invites to be social on Friday night and Saturday night, but I redeemed myself Sunday night and made it out to celebrate my friend Nick's birthday at one of my favorite restaurants, Eva's Caribbean Kitchen in Laguna Beach. I've known Eva for years and she goes to my gym. I love her to death--she's the nicest woman on the planet and cooks up some amazing food. You'll be blown away by her hospitality as a restaurant-owner. Here's a little taste of the dessert... 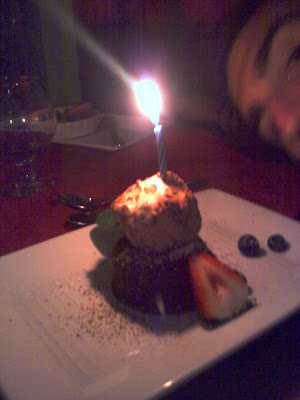