Running Around, Even in a Race! (RR Included)

What a weekend! From a picture-perfect long ride along PCH to a unexpected late night out with good friends Saturday (so fun, but so not conducive to my lifestyle) to an awesome house guest on Sunday-Monday, and so much more... it was a good one. Somehow I even managed to work a little every day too (workaholic, much?). Needless to say, I feel totally wiped out today from all the running around as of late, and it might turn out to be a day off from training, despite "the plan." We'll see. Must listen to the body. With all I've been doing, I can't believe I haven't gotten sick yet, but right now I feel like that could soon change.

Scene from long ride along the coast... pretty much the standard scene for the weekend: 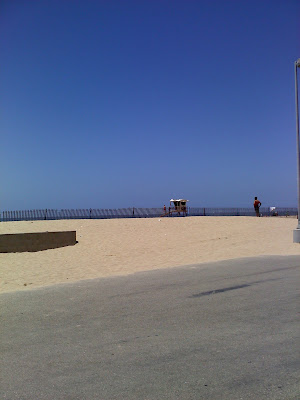 The highlight of my long weekend was running the Laguna Hills Memorial Day Half Marathon Monday morning. It's been more than a month since I've done a race (so sad) because "real life" has taken over -- I've had to budget both my time and dollars wisely, and racing hasn't fit into that scenario, unfortunately. I wish I could do it all, but that's life. So you can imagine my excitement to run the half, even if it was a C-level race on fatigued legs. Self-inflicted pain? Yes please! In fact, that was part of my excitement. It's been another two BIG weeks of Ironman training, with one day off before the half. I wanted to see how my body would fare amidst this IM training stuff, not to mention a "new" life that's keeping me busy outside of training, but that's another story ;) Even on Sunday, walking up stairs burned and hurt, so I knew I was in for it on Monday.

I didn't set a specific finishing goal, and I told ER to expect me anywhere from 1:35 to 1:45 (she was doing the 5K to test her speed sillzzz, so she'd have to wait around for me. Btw, her 5K pursuit sounded crazier than what I was doing. 5Ks suck, but I was stoked for her wanting to test that side of fitness). Anyways, in an A race, I'd be much more focused on setting time goals, establishing a detailed strategy, doing course recon, that sort of thing. But this race was simply a fun way to replace my usual weekend long run and feel a little bit of that race adrenaline I was craving. That said, A- or C-level race, I'd still give it my all because, heck, I don't do it any other way. Bring on 13.1 miles of hurt.

The LH Half Mary course is interesting. It's lots of rolling hills the first 70% of the race, with the first ~5 miles netting a slight elevation loss overall. You hit Aliso Woods Canyon for the middle chunk, and that is a combo of ups & downs, outs & backs. The ups hurt, but then again so do the downs ;) The last 30%, or about 4.5 miles, is all uphill, some parts steeper than others, but overall a gradual climb back to the finish. Ouch! Everyone was saying how much that last section would hurt and to "save some" in the tank.

The gun went off just after 7 a.m., and I kept it moderate RPE-wise not "bat outta hell," which put me at ~7:20s in the beginning; that would help me still stay sub-8:00 in those last tough miles. My legs and hips -- heck, my whole body -- felt very stiff until about mile 3+. Pretty standard for someone in IM training from what I've been told. Or maybe it was the couple glasses of wine the night prior. Who knows ;) Thankfully, my HR and cardiovascular system felt great for the pace.

I ran with one of my athletes, Ray (the one with the hair) for about a mile, and that was a blast. I pulled ahead of him and then saw another friend who's a member at my gym. He's getting faster, I can tell... I say it's the fitness classes he takes with us!! :) Then at mile 5ish, I saw my boss/training partner, Mike, and was like, "What's up biaaatch?! There you are! I thought you bailed on this race!" (I didn't see him lined up at the start like I expected.) We chatted for maybe 2 minutes then he took off at a pace that was too much for me.

About 50-60 minutes into the race I thought disaster might strike. I didn't take a second bathroom break before the race because I would have been late to the start line, but I knew I needed that break. I was starting to feel it. I prayed that I wouldn't have an accident. God must have answered me because that terrifying sensation of needing "to go" went away. Was it mind over matter? Was it God watching over me? Was it my experience of having to hold it? Who knows, but I was glad I got past that.

By then we were weaving through Aliso Canyon. I can't even describe how perfect the weather was at 8 a.m. -- cloudless and brisk but warm -- and how beautiful the natural scenery was in the undeveloped canyon. "This is why I do this," I said to myself. I also love the entertainment I get during races by looking at the other runners. Got to love the peeps in tutus, or women in full makeup or how about the folks with enough nutrition strapped on them to last for a week ;)

Then I noticed reality: My pace was starting to slow a bit, and on uphills I was dipping into the 8:00s. No good. I started playing mental games of "shit how am I going to hang on to my sub-8:00 pace for another 5ish miles if it's only going to get more difficult?!" Then on an out-and-back I saw a couple people I knew who weren't that far behind me, people that I had to beat. That was the little motivation I needed to go hard in the last ~4.5 miles of uphill. During that stretch another fire of motivation lit within me when I saw the 1:40-pace-sign-holder dude. My goal became to go sub-1:40. "I may be fatigued from Ironman training," I said, "but I refuse to go over 1:40 in an open half." I was cutting it close, though, so I really had to get goin.

Those last miles were in the 7:30s overall. I was on pace to go sub 1:40 by mere seconds. Then the very very last section was the steepest hill of all! Bastards! (Just kidding). But seriously, it was maybe only 50 yards, but steep as hell leading into the finishline chute. I was going 150% to make it in time. And I did. 1:39 and change. Turns out, I was 2nd in my AG. That never happens in open running races, everyone probably slept in I guess haha.

Being the competitor I am and with how much training I do, of course I would have liked to have finished closer to my PR time of 1:36 and change. (Ian, your "drink the night before and PR the next day" theory didn't work for me. Probably just didn't drink enough haha.) But all things considered, it was a great race for me all around on a tough little course. I did what I set out to do: enjoy a morning geeking out on a race (man do I love geeking out on races!), push my body hard and test how much Ironman training is affecting my body. It was eye-opening to see that, yes, I may be missing a little bit of that speed I'm capable of pulling off, but the positive finding is that I know I'm able to do more and more SBR day after day after day after day without blowing up.

ER and I post-race. I'm wearing my new Ignis kit! And no, D, the Zoot bottle wasn't strategically placed :) I must brag that ER killed the 5k and podiumed in our AG too!!! And she was running on fatigued legs as well. Ya girl! 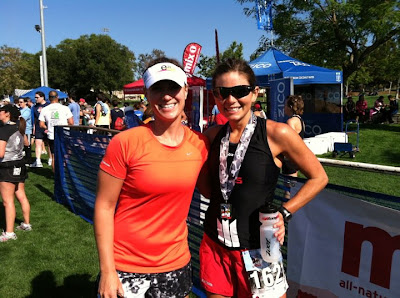 The rest of the day rounded out what was an ideal weekend, in a double-life kind of way. (I'm not going to try and explain that one, but trust me it makes sense. It's an odd style of "balance" you could say.) Anyways, ER and I hit up brunch and mimosas at a local Laguna Beach cafe followed by some shopping (she bought, I browsed) and then had some much-needed beach time/girl talk. Great day. I was out cold by 9 p.m. 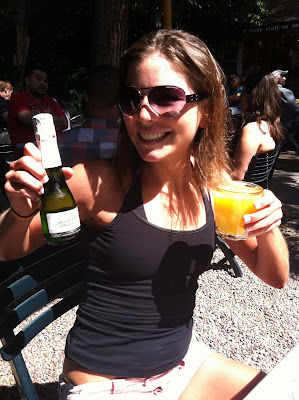 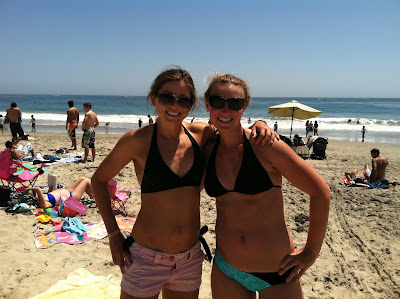 *Note to self (because, yes, I refer back to race reports to remember things haha): Keep an eye on that nagging R leg thing that surfaced after Fri ride and in the middle miles of half-mary. Must keep that at bay.
Posted by Tawnee Prazak, M.S., CSCS at 1:00 PM