Last night was Valentine's, and we don't do Valentine's -- we both agree that it's a rather silly holiday, and thankfully it's usually on a week night in which we each have a class to teach or something going on so we can ignore it. But it was Friday night this year so... well... nothing special... haha. We decided to do what we usually do: Cook at home, and go to bed before 10. In fact it was so crowded and trafficy around our area (Laguna Beach, CDM, etc) that we vowed to never go out to dinner on V-Day, and instead stay tucked inside avoiding over-priced pre-fixed meals and cheesy love decor.

The only difference for this Friday eve was that John did most of the cooking AND he baked, so that was fun for me, and, ya, I'll admit it was pretty romantic (in my eyes) since I'm the chef 99% of the time, so maybe it was a special V-Day. Plus, I'm sick (more on that later) so it was nice not to have to do a bunch of work.

On the dinner menu:


Ingredients and directions (makes 4 hearty patties):
-Chop up about 5 slices raw bacon into ~1/4" squares and fry on stovetop until they're about 75% done. Remove and drain on paper towel.
-In big bowl, mix together 1 pound grassfed beef, the pre-cooked bacon bacon, goat cheese crumbles*, salt & pepper to taste, and any extra seasonings you like; we do garlic and red pepper flakes for extra flavor and a kick.
-Form into 4 big fat patties and grill on barbecue to your desired done-ness. We like medium rare.
-Build your burger how you like; suggestions below with our faves...

*Goat cheese crumbles are like the consistency/shape of feta or blue cheese, but a tad softer and spreads more easily. I don't do well with most dairy, but I am ok with goat products due to the lower lactose content, which is why we go with that, plus it's more delicious in my opinion. 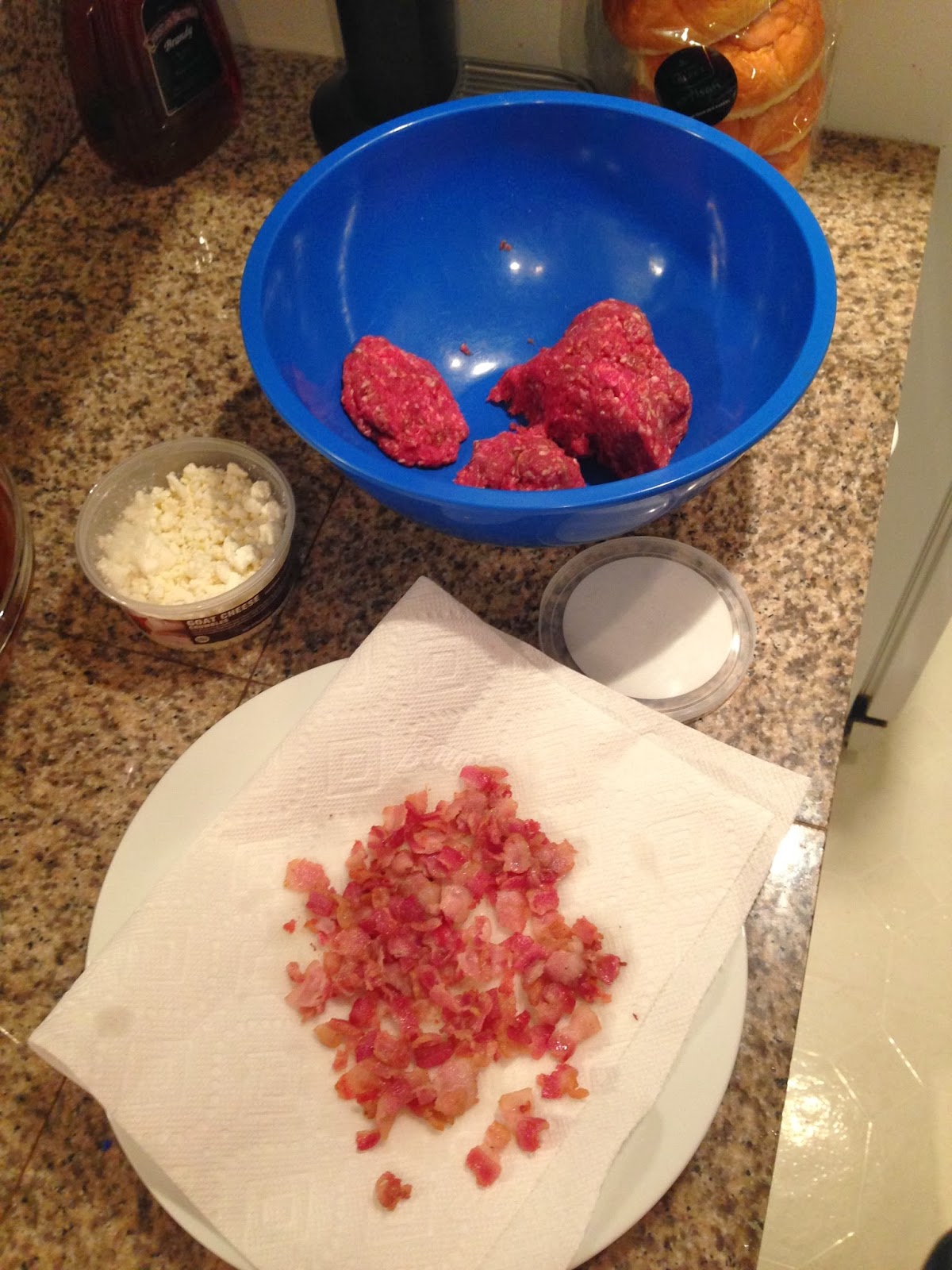 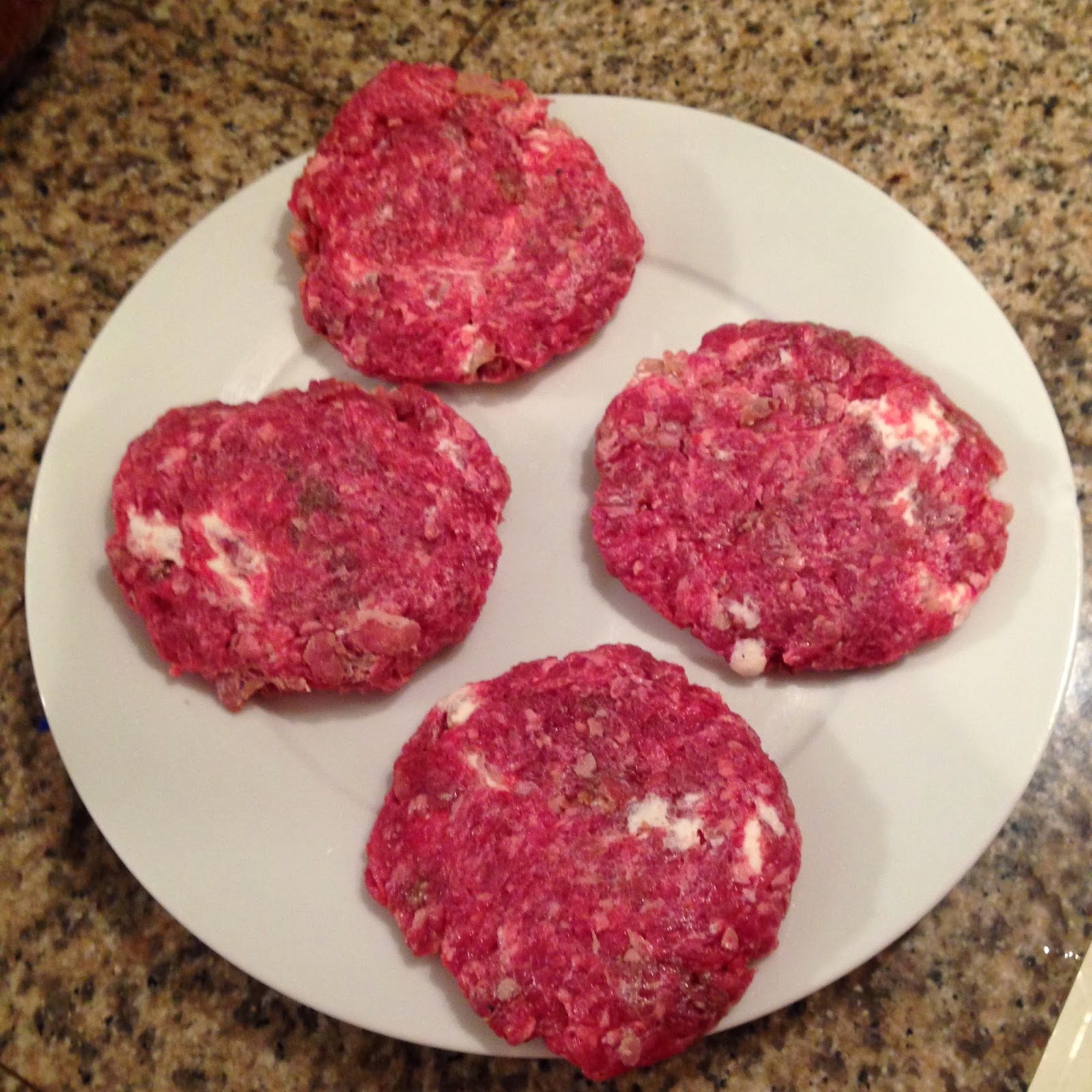 On the side and/or toppings for the burgers: 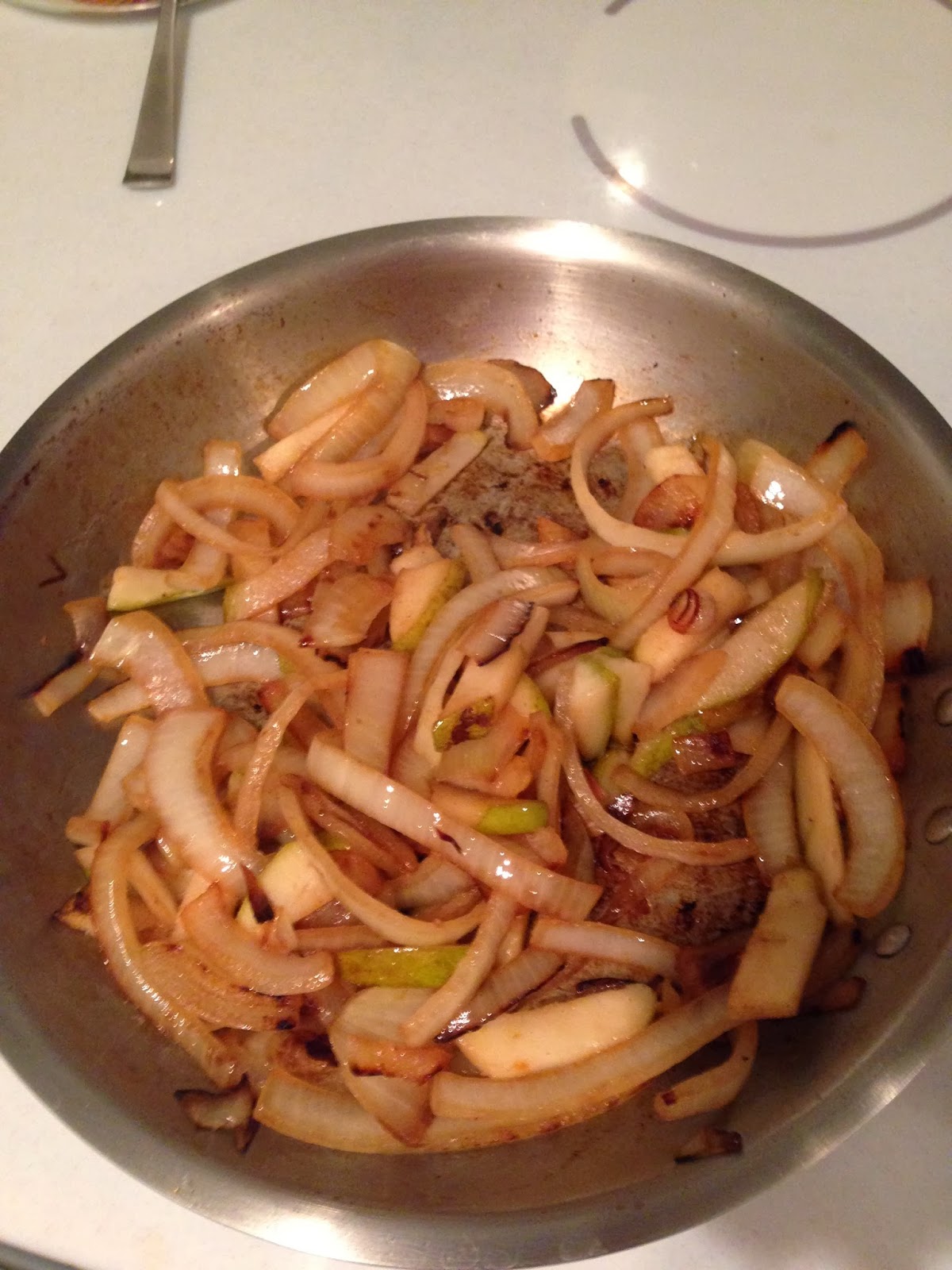 -Tomato sliced and soaked in balsamic vinegar
-Sweet white onion and pear slices, pan sautéed in coconut oil - Cook onion slices until nearly done, and add in thinly sliced pear the last few minutes
-Baby arugula
-Horseradish mustard
-BBQ-grilled asparagus (instead of fries!) - Usually we marinate in olive oil and lemon before grilling, but because I was being lazy, we didn't put anything on this time, and just threw it on the BBQ straight up, which ended up being amazing. It got crispier without the oil, like french fries, and the flavor bursted -- oddly sweet and no need to add salt or anything. Honestly some of the best asparagus I've had.
-Buns (optional) - John also does buns, but *gasp* I do not. I know, shocking.

His &Her Plates (I ended up spreading on more goat cheese after this picture lol):

For Dessert?
Flourless Chocolate Cake with Organic Blueberries
I had a glass of wine with dinner, and that masked the shitty feeling of sickness for a minute, but then it was back, and I realized drinking was a dumb idea. We had a bottle of brandy around for the Flourless Chocolate Cake(s) that John was making... he suggested some of "grandpa's cough medicine" before bed? Tempting, but I passed.

But back to those cakes. Ya, that picture right above looks pretty darn good huh. It was. I promise :) The idea and recipe for these came from Biju The Chef and his recipe in the FeedZone Cookbook. If you don't have the book, and want to recipe, click here (some people have had problems with the link; let me know if you have an issue and I'll send it to you personally). I was texting with Biju earlier in the week about them, and that's when we decided John wanted to be Mr. Chef with this recipe. 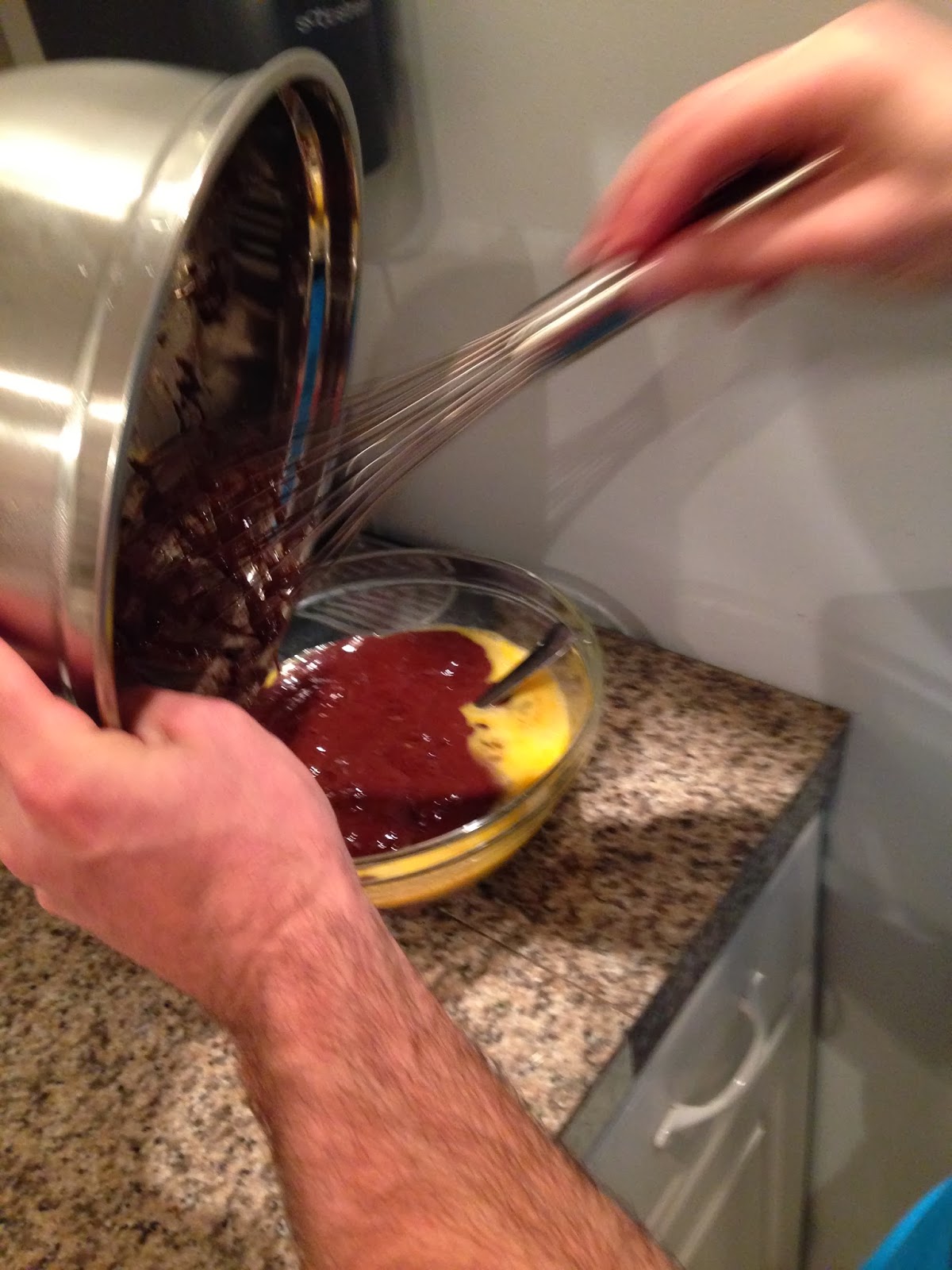 John's chef skills and the cakes did not disappoint. They were amazing, and even healthier than I expected -- go Biju! There's only a quarter cup of sugar in the whole recipe (plus what's in chocolate chips), then a lot of butter and eggs, both of which I love, and that yielded 24 little cakes. They are made in a standard-sized muffin pan, so you can imagine the size; I didn't feel guilty about eating a couple.... ok, so actually it was closer to 3 in one sitting :) 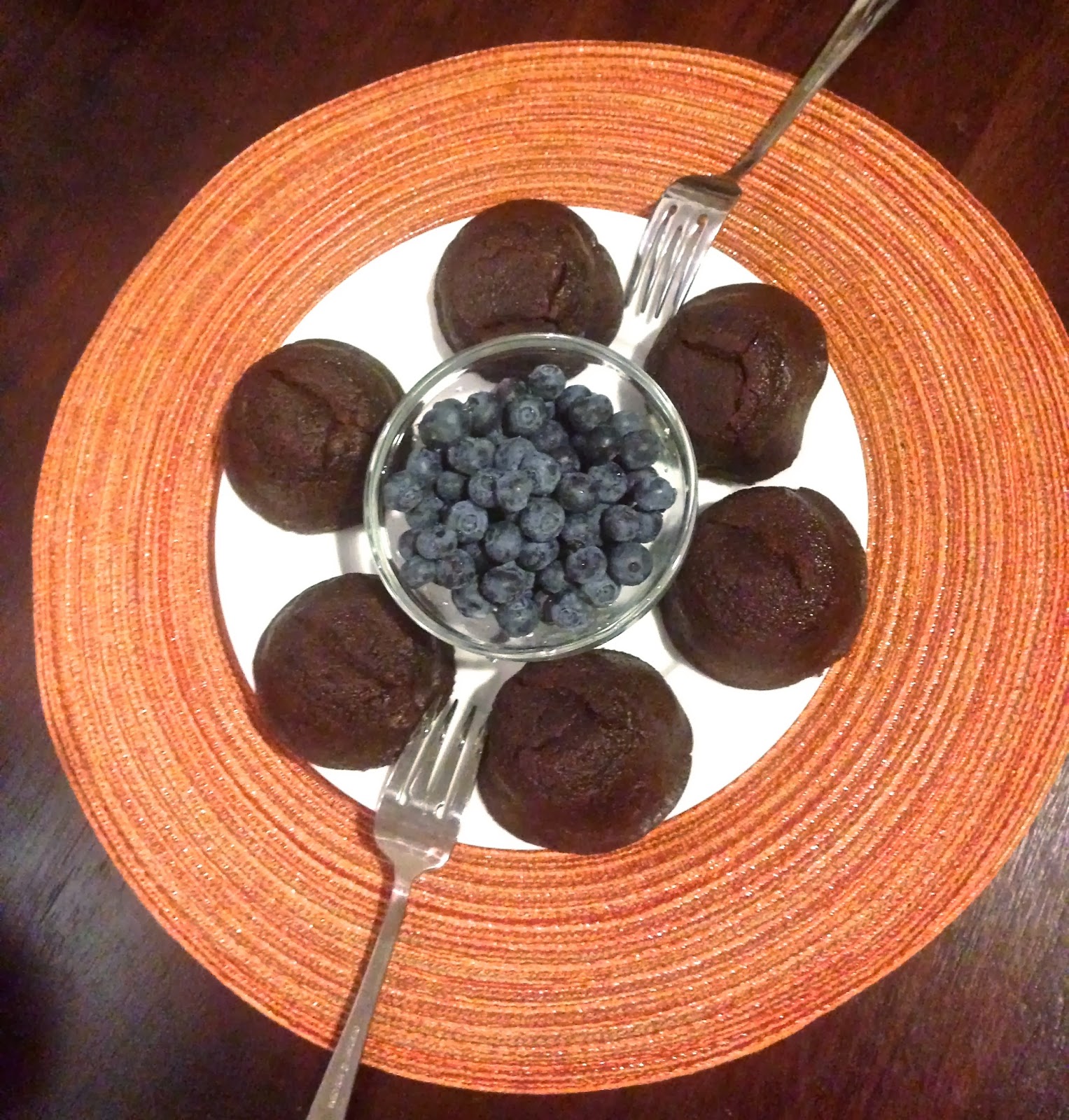 I thoroughly enjoyed watching John get busy in the kitchen, especially wearing his "I'm a Betty" shirt hahahaha!!! In fact he said he liked it too and misses cooking/baking. I think he's inspired to do more of it -- woo hoo! I love my time in the kitchen, but am happy to welcome helpers.

And now it's time to go find some natural remedies to get over this cold asap. Starting with a trip to the farmer's market.