Outrigger Canoe Race Across the Pacific... and Back

Our means of transportation (human power only! I'm third back in black)... 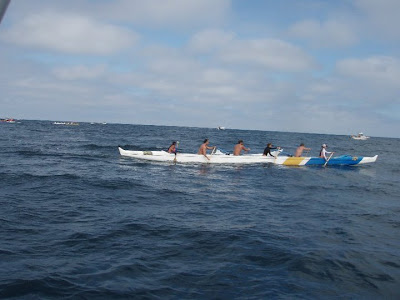 Our destination... a mini paradise only 30 miles off the California coast... 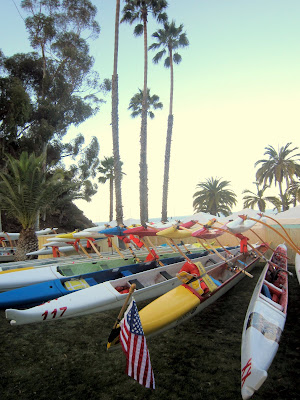 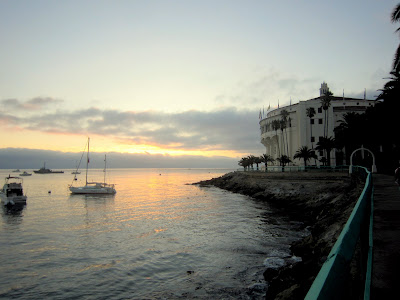 I thought paddling/racing an outrigger canoe for 5+ hours TO Catalina would be enough. But what happens when your team wants to paddle back the next day just for fun? Huh?! At first I was reluctant about doing a double. But how often does one get the opportunity to make the Catalina Channel Crossing twice in 48 hours with an awesome team?

I think it was sometime Saturday night, after a beer or margarita, that I made the commitment to paddle home and not take the easy way, the $35 Catalina Flyer. Hell no. Above all, I wanted to prove to myself that I am strong enough to handle mega miles on the sea. Plus, I couldn't let my team down. They needed all the helping hands possible. Thankfully, I had made extra sandwiches just in case I chose to paddle twice. I know myself too well :) 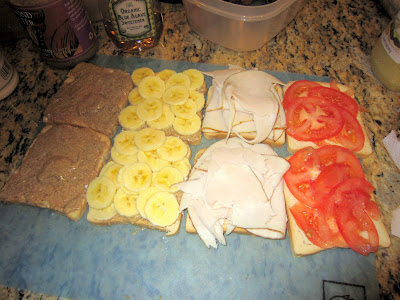 Glad I did what I did. This trip = me stepping outside my comfort zone and doing something crazy but amazing. I surprised myself in how strong, prepared and motivated I felt for the entire duration. Of the ~12 hours we spent on sea, each person probably paddled 7+ hours total.

Sat. morning loading the escort boats... Goal is to keep your crap dry! 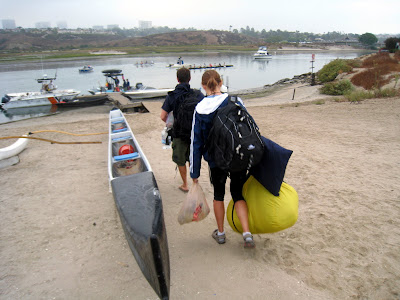 I got to pretend to be a lifeguard, our team theme (notice escort boat #1 to my right -- this trip is not about traveling luxuriously haha)... 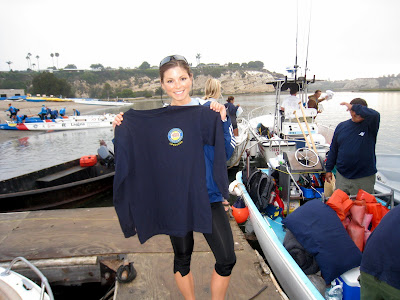 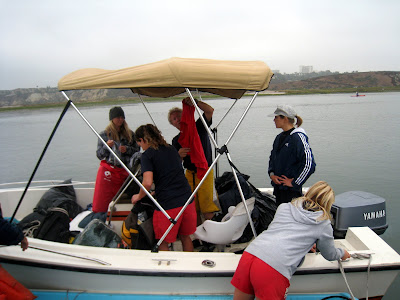 Before I get more into our adventure, I have to describe the "shift changes" that occur during nine-man outrigger canoeing. Simply insane!
The outrigger holds six people, but there are 9-10 on a team. A few are always "resting" on the nearby escort boat that leads the way and holds all the baggage, food and jackets. You only paddle on the outrigger for 20-40 minutes at a time, then someone comes into relive you while you rest for 10-20 minutes. Shift changes are constantly occurring because everyone's timing is staggered.

This is where it gets interesting. Instead of the escort boat leisurely pulling up alongside the outrigger for a "dry change" you have to jump into the ocean -- no time to think about how cold it is -- and swim to your next destination, either to the outrigger to paddle or to the escort boat for rest. If you're going on to paddle, you swim full speed to the outrigger and hoist yourself up into the canoe while it's still going full speed -- a rush I can't even describe. I thought a lot about sharks every time I made a shift change. Those changes also served as our only potty breaks. 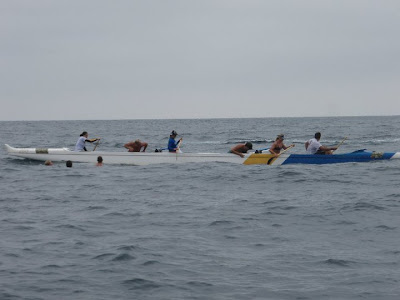 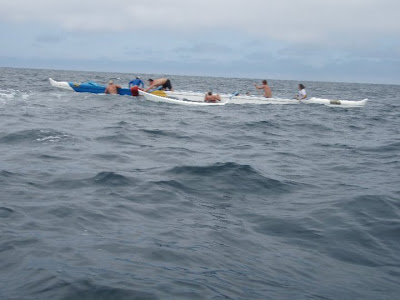 Imagine doing that constantly for hours. Never a dull moment. Of the whole experience, the only part I didn't enjoy was resting on the escort boat because I was wet, freezing and shivering, thinking, "Put me back in, coach! I can paddle all day! Just throw me GUs and coconut water, I don't care! Wanna be warm!" But whatever. I just borrowed wet jackets and dealt with it :)

See me huddled on the escort boat, freakin freezing... 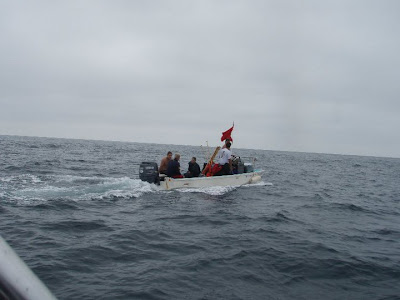 So anyways backing up a tad. The race got started on "Hawaii time" Saturday morning right outside Newport Harbor; the sea was filled with floating plumerias and hundreds of energetic outriggers. We were entered in the co-ed division; the women's team raced Saturday too but started ahead of us (we passed some by the end haha).

The funny thing about our team of guys & girls was that nearly everyone had just met that morning and none of us had ever paddled together, some had never paddled ever. We were just a randomly assembled group of lifeguards, endurance athletes, etc. I knew Sara and Stuart, and they are tough, so based off that I figured the others would be the competitive type who'd want to go hard. I was right. All studs.

View of the start in the distance (compliments of my parents)... 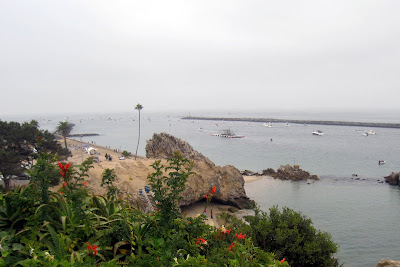 I was on the first shift. The start was a rush. We quickly fell into last place, but that was not how we ended up! Our team got in sync fairly fast, and soon after we started making passes.

Speaking of being in sync -- keeping rhythm among the six paddlers is the #1 most important part of outrigger. It's intense to do this, and there's no time for chit chatting or screwing around. If just one guy is off, you slow down significantly, even if you have the strongest guys ever paddling. I was stoked on my team's coordination and power. 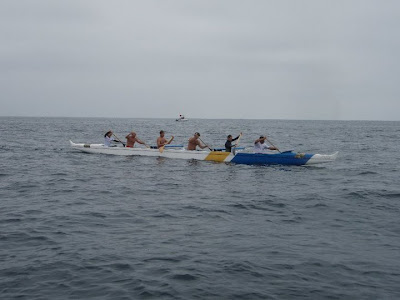 I sat in the #2 position for most of Saturday. Each position on the outrigger has a purpose/job; #2 is in charge of calling when to switch sides with the paddle. About every 13-16 strokes, you yell "HIKE, HUT, HO!" and everyone changes in unison.

That goes on and on and on and on. But the hours were flying by and it wasn't long before I got a glimpse of Catalina. Then in just over five hours, we arrived in Avalon. A pretty solid time for a rookie team! (Don't know our final ranking.) The island destination was rocking and full of energy with outriggers, partying, sunshine, cocktails, bathing suits, music... play time!

I had gotten to know my teammates a little while on the escort boat, but Saturday night was when we really bonded. There was no established plan on what would happen once we arrived in Catalina; no hotel reservations for the group, no agenda. Just got with the flow and live in the moment and make sure you keep your sleeping bag dry. There was good chemistry in our group. 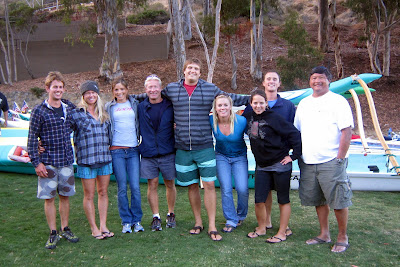 It was awesome. We totally bummed it. No showers. No brushing hair. Maybe some deodorant? We were at least able to change clothes in our boat driver, Dave's, mini hotel room big enough for one. Then we just migrated around the island looking like homeless people. We were at least presentable enough to be allowed inside a restaurant and at a bar. 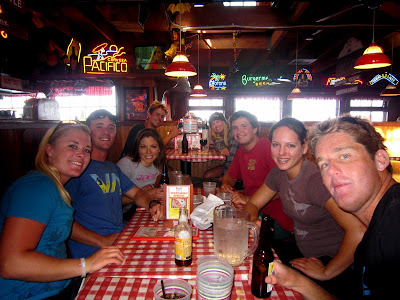 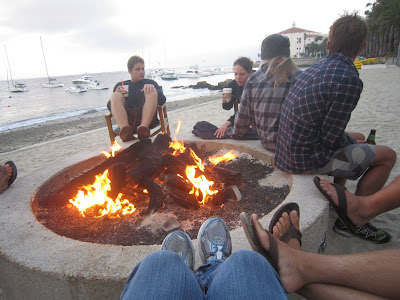 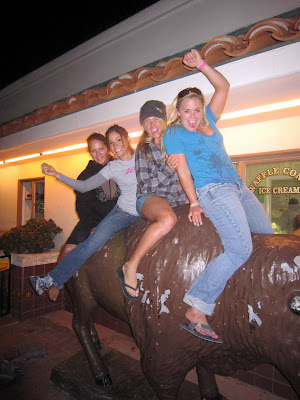 To sum up what was an amazing night (as seen above): good food, cocktails on the beach, bonfire, dancing under the stars to a live band, bonding sessions... and later setting up camp outdoors near the beach with the sounds of the ocean putting us to sleep. 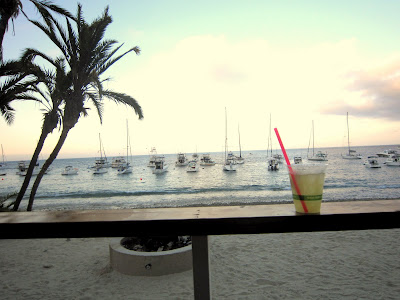 My last view before sleeping... 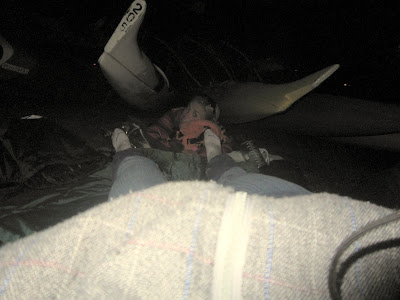 We were up at 6:30 a.m. Ready to do it again. I was nice and cozy in my sleeping bag as I saw the sunrise creating an orange glow on the ocean, and I didn't want to get up just yet. But we had to vacate from our secret camping spot asap, just to play it safe ;) 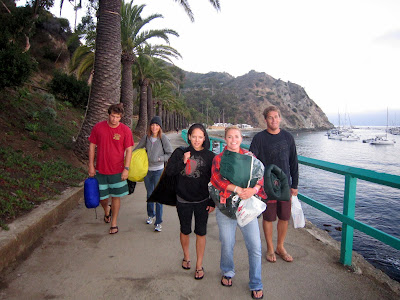 After fueling up with caffeine and food (nothing like a day-old almond-butter-banana-agave sandwich and eggs for brekkie!), we got on the water by 9 a.m. and were paddling by 9:30 a.m. Sunday was the men's outrigger race (Catalina to Newport) and we had to get going before their start. (Saturday had been the women's and co-ed race... we were co-ed.)

The paddle home went by fast. I opted to do two long endurance paddle sessions of a couple hours each. That's not common for nine-man outrigger, but I wanted to test my body. It pulled through for me!

Right before my first endurance sess, chatting with Lindsy who's quite the studdette... 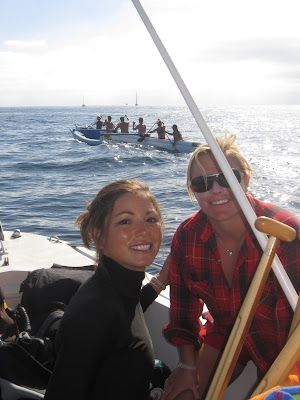 Our team was also smaller on Sunday, so if I wasn't paddling, I was working, i.e. driving one of the escort boats. It was my first time driving a boat, and the job was just handed to me regardless if I could do it. But I managed just fine.

Another crazy thing about Sunday was the wind. Saturday it stayed overcast and rather calm, but Sunday it was clear skies and windy -- so extra chilly despite sun! We had to navigate across some rather large swells in the canoe, and occasionally we'd catch one. Paddling in chop is extra gnarly and difficult, and you're constantly soaked from water gushing in.

It's funny, I wasn't truly tired until we got back to Newport Sunday afternoon. Then fatigue hit. I think my body/mind was determined to stay strong for the whole trip, but once we were done, I was DONE. Checked out. After a long hot shower and dinner, I was asleep by 8:30 and hibernated for 10 hours.

What a journey. Not to mention, I have some kick-ass new friends!

Can't wait to do it again. 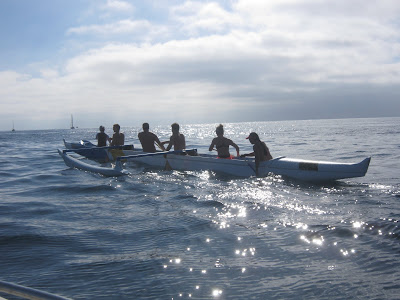