Making Time for the Beach

New priorities! Not only is surfing making a huge comeback in my life--I went twice this week--but I also did a little soft-sand beach running Tuesday morning, and oh man... that's good stuff. I also did my first-ever Crossfit workout, and for those of you who know about Crossfit...daaaang, it is legit.

As for surfing, I really forgot how much I enjoy it! I think for a while, back in the day, I was so concerned about being good that I lost the ability to just paddle out to have fun. Then other things started becoming more important, namely triathlon, so surfing sessions became few and far between.

But now I see surfing in a whole new light. With triathlon as my main focus and discipline, surfing can be a relaxing, enjoyable way to be active outside of swimming-biking-running with none of the added pressure of thresholds, intervals, pace work, beating myself up. Don't get me wrong--I love doing all that with tri, but it's nice to have another sport that's just for fun. No big deal if I suck or kick ass.

On that note, Friday the waves fairly bigger than they've my past two sessions, and it definitely was more challenging. The first wave I caught was my best of the day; things kind of went downhill from there. But thankfully I had a friend out with me so it was fun and I wasn't scared or anything like that... just held onto my board and got pounded on a bit. Good times.

This was my view when I opened the back doors of the Prazak Surfmobile. Ahhh, heavenly. (A little windy out today, but still surfable): 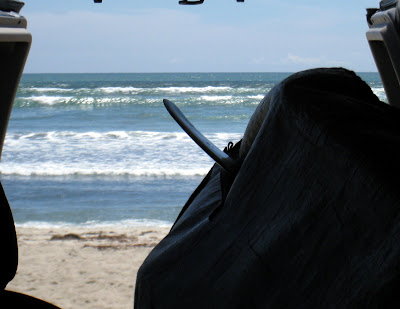 Being at the beach and in the ocean is therapeutic after a gnarly workout week, and spending time in this environment just seems necessary: 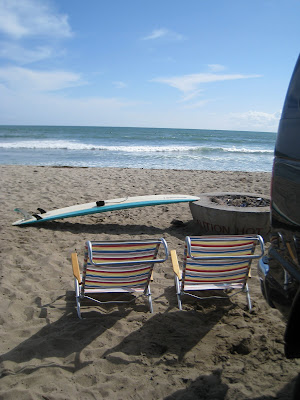 All I needed was a Corona with a lime. Too bad there's no drinking allowed at San-O anymore. 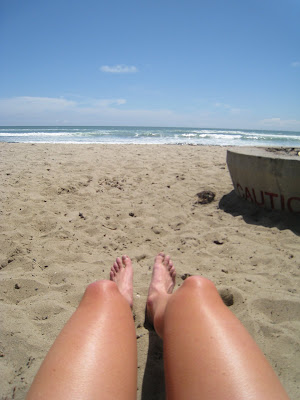 I have to do a little work with my surf equipment, though. I've had the same Becker longboard since high school (why change something if you love it?), and at this point I think it's had the same wax on for about three years now. Poor neglected board. So this weekend, I'm making it a priority to re-wax my board. All that sandy grit is tearing into my skin. 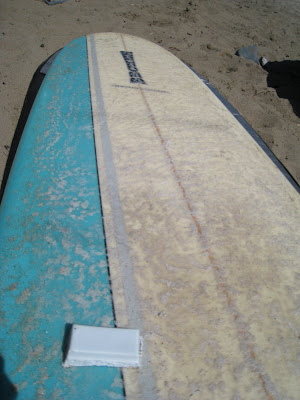 I was thankful that it turned out to be so beautiful at the beach today because the Friday forcast called for more thunderstroms (WTF?!) and conditions were like this in the morning when I headed to the gym for a swim/run session: 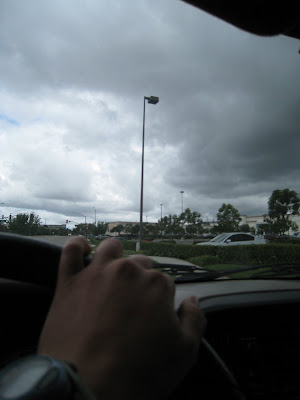 ~~~~~~
Part 2 of my new beach obsession is running in the sand, SOFT sand that is. After doing an early-morning workout at Sport Performance Institute with the Tribuys team on Tuesday morning, I headed down to Calafia in San Clemente to meet a friend for a soft-sand barefoot run. Very peaceful so early in the morning, before the crowds start shuffling in: 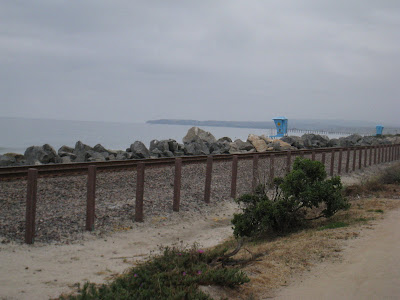 We ran for about 40 minutes, down to around Lowers and back, which was 4 miles. Sounds ridiculously slow, but I was working hard! Not 100% hard, but I don't think I could have pulled off even 8-minute miles. Running it the soft stuff is a killer workout, so I've decided to make it a semi-regular part of my routine. Talk about getting powerhouse legs.
.
Even though it was still overcast and chilly after our run, we were so heated up that we jumped in the ocean to swim and cool off. I was straight up in my workout clothes (sports bra, strecthy capris--kind like a bathing suit, right? haha); my friend had his boardshorts on so no big deal for him. It was awesome though--kind of like an ice bath right after a hard session, felt great... until I got cold ha ha.
.
After Tuesday morning double-workout craziness and a 33-mile bike Wednesday morning, I was invited to try out Crossfit that afternoon at SPI. All I have to say is wow. Add it to the list, too, because the power and strength benefits from that will be amazing, and I have proof in seeing some of the other guys. I'm hooked!
.
Needless to say, by Thursday I was mush. But smiling. And back it all by Friday.
.
Final thought: I will always live close to the beach. After all, that's how I chose which college to go to!
Posted by Tawnee Prazak, M.S., CSCS at 6:31 PM