Leading up to CA 70.3, I'm going to do a little experiment with something. (It's ok, I've had exposure to this "thing" before so it's nothing new lol.) I won't really be able to measure or compare data to draw definite conclusions because there are so many variables involved in the lead-up to the race that will have an effect on performance, but nevertheless...

I'm going to drink beet juice 1x a day, every day; I started on Monday. Why? Beet juice is shown to improve endurance performance (more below). The ideal amount according to studies is ~500 ml per day. My protocol is to just throw a large beet into the Vitamix with a bunch of other fresh fruits and veggies, i.e. I put enough stuff in the mix to mask the flavor of pure beet juice. I mean it tastes OK, but it's not thaaat great and it gets old quickly :) 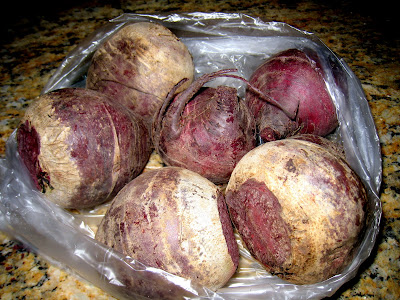 So, beet juice is one of the only naturally occurring "supplements" out there that shows promise for working as an ergogenic aid for endurance athletes. The reason beet juice may work is because it has a high level of nitrates, which allows the athlete to use less oxygen at a given intensity (reduces oxygen cost), thus conserving energy. In other words, the energy requirement for whatever workout being done is lowered, which means the athlete could potentially last longer and perform better. The mechanisms of how the nitrates work are a tad more complicated (i.e. there's more detail about mitochondria, etc), but that's the main idea.

Studies have shown anywhere from a 15% to 20% increase in time to exhaustion, meaning the subjects have lasted longer in whatever they're doing because, again, you don't need as much energy to do the task at hand. Do a Google search and you'll find these studies and more info.

At this point, I'm still skeptical, but I do think there could be something to this, like with chia seeds. I haven't read the studies in full detail, but I can say with confidence that for someone doing a half-Ironman, beet juice alone isn't going to make drastic improvements in overall time, maybe a couple percent, if that. There's just so much more that goes into it, and we're not test subjects in a controlled lab environment.

However, beets are still healthy regardless of their effect on endurance performance, so having one beet a day definitely isn't going to hurt in any way.... Beets are shown to improve cardiovascular health and lower blood pressure; they're full of potassium, could help reduce inflammation, and beet greens are a rich source of iron. Us athletes need our iron! (I eat the stems and leaves separately from my drinks.)

Blend all that in the vitamix

*It's best to chop up the beet so it grinds down more easily, especially if you don't have a vitamix. Also, just make sure it's washed; no need to peel or do anything else (aka raw!) 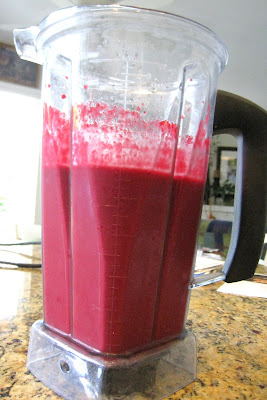 -The orange really helps offset that extreme "beety" flavor. You can also add more almond milk and less water, or even vanilla whey protein, to enhance creaminess and get in more nutrients.

-Adding in your greens & veggies is easy too: throw in a leaf or two of kale, handful of spinach, fresh parsley, a carrot and/or cucumber. When I do this, I will add more orange, almond milk and water to so it doesn't taste like pure grass and isn't overly thick.

That's it for now... more blogs in the works. In the meantime, I've had two full days off from exercise and one sports psych midterm, so I think it's time for me to get out and enjoy a nice bike/run!
Posted by Tawnee Prazak, M.S., CSCS at 11:00 AM