Before I get goin with today's post a reminder: enter this contest... only several days left; what's there to lose? :)

Anyways...
I had two choices for my birthday present, which would be an aero helmet: the Rudy Project Wingspan or Giro Advantage 2. Neither would bought in a store; but rather ordered on the Internet, thus I was unable to try them on. But obviously a helmet is an individual sort of thing -- one person may hate what another person loves. Advice I got from Twitter verified that (yea, I know, Twitter advice? but I have legit followers!!!). So I decided we'd order both then return my least favorite. 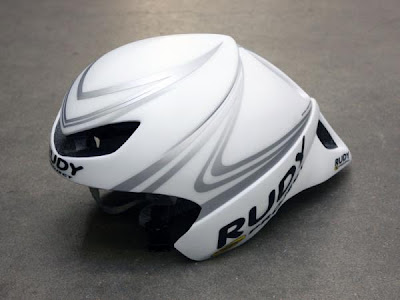 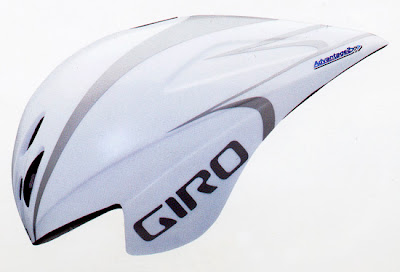 Well both came, and I had no trouble making a choice: the Rudy Wingspan.

I'll start by saying that the Giro is not bad in any way, shape or form!! It's comfortable and extremely lightweight, it looks super hot and I'm sure helps with speed. But it's really hard to get on and it is a little claustrophobic on the head -- the whole thing fits extremely snug on the noggin, ears and all.

On the other hand, there's the Rudy. They (John Cobb actually) crafted it in a way so that there's a layer of space between the helmet and your head wherever the pads and front/back don't touch. To me, having that extra breathability will be KEY in the longer races. Plus, even though there are less "contact" points, the helmet doesn't move around while riding and it still fits snug enough. Furthermore (this is big), the Rudy is 10x easier to put on, and in T1 I know that will make a difference! Also, it's about the same weight as the Giro.

The other thing that sealed the deal is that the tail on the Rudy helmet is a little shorter, so if my neck does get tired and I look down, I won't have a huge pointy thing sticking up, negating any speed benefit to wearing an aero helmet. I know I look down at points during the bike because everything else is just working so hard, so I'll try to minimize that, but if I do mess up, Rudy still has my back.

Bottom line: This is just my opinion. I really believe everyone should try on all equipment before purchasing such a "personal" item. For some people, the Giro may win hands down; for some people the Rudy and Giro might suck and they like Specialized. Who knows. Hopefully, I've just highlighted some good things to look for when choosing an aero helmet.

Also, fyi, I was not paid or persuaded by freebies to say one thing or another regarding these helmets.
Posted by Tawnee Prazak, M.S., CSCS at 6:38 PM